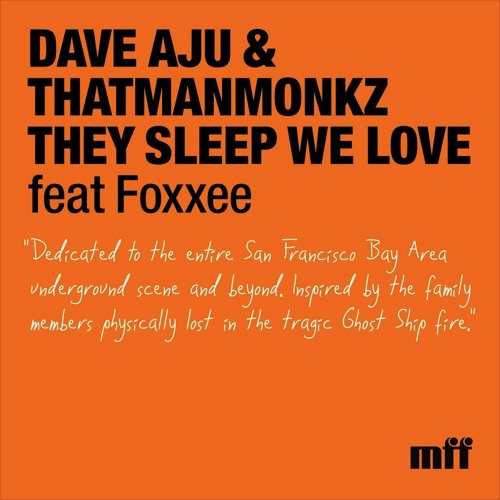 The 36 people who passed in the Ghost Ship Fire on December 2, 2016, in the Fruitvale neighbourhood of Oakland California were just looking to dance, vibe and take part in a communal gathering based on art.

Bay Area Warehouse parties are notorious for uniting alternative thinkers and outsiders pushed to the fringes due to finances, lack of affordable housing, or lifestyles. Under the umbrella of inclusion marginalized folks can get found on a dance floor. “They Sleep We Love”, dedicated to the loss of life on that particular night, reminds us that dancing has always been a political choice that reaps spiritual benefits.

Dave Aju explains the making of the track, “This release has been a long time coming and is as full of love as it gets. After our successful collab on his dope “Columbusin” LP, my dude Thatmanmonkz / Shadeleaf Music and I started working on some drum cuts together. At the same time, I finally linked with the homie/hometown legend Lawrence Petty aka Foxxee and made good on a promise from years back we work together. He and Pete Avila are directly responsible for introducing most of us Bay Area kids to the early sounds of House Music on Ya Mama’s House late night on 106 KMEL, lest we forget. At first, we had a cool lil love story jam going and were running with it… Then, the tragic news of the now-infamous Ghost Ship fire hit us, as it did many who were close to the SF Underground scene and the friends and family physically lost that evening. We made a collective decision to rework the track as a tribute, at first very specifically to our SF roots, so the track took a stylistic turn back to the feeling of the sweaty warehouse vibes of the mid-90s Bay Area rave scene heydays where we all cut our first rugs/teeth, when second wave Chicago (Relief, Cajual) and NYC (Maw, Nervous) were the main menu choices for those endless nights.”

“Then Lawrence wisely decided lyrically it should instead be a universal underground anthem, as tragedies like these not only affect those geographically close but that our worldwide family connection is our strength and the message is We Are The Music. First and foremost. Before cities, states, nations, politics, career bs, or any other dividing lines. This decision was taken one step further with the fitting happy accident of the label hands at Music For Freaks retitling the track They Sleep We Love, as opposed to Live, as our beloved late brother Johnny Igaz’ eternal arm tattoo read; this one is for him, and all of them, and all of us in the end. My man Seven Davis Jr came through with a fresh remix ribbon to tie on the package, I added a Foxxapella so the message can be heard loud and clear, and now it’s finally here!”