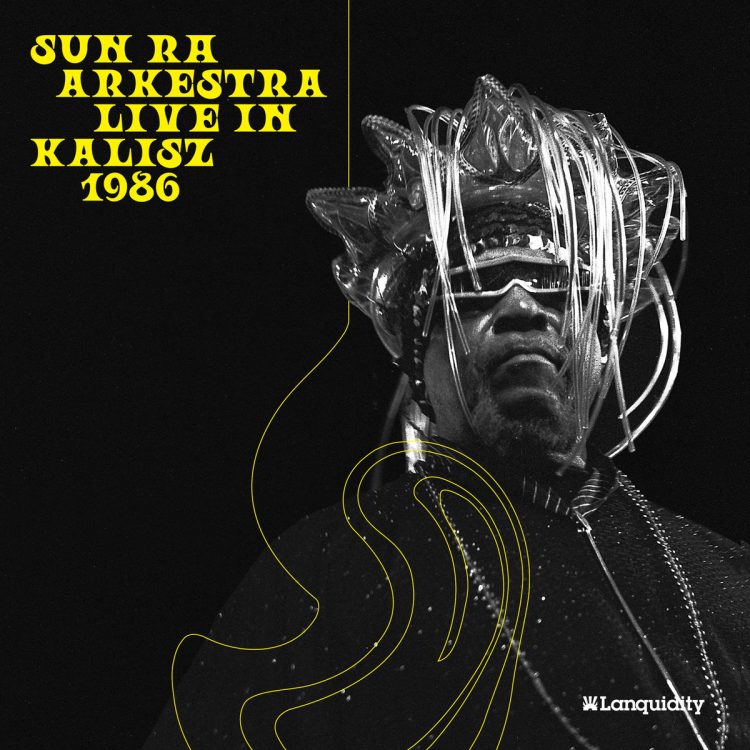 Lanquidity Records is super excited and proud to announce that after a few years of intense searching and meticulous preparation, we can finally present to you our Sun Ra Arkestra project – a rare recording of the ensemble’s little- known, first ever performance in Poland in 1986!!!

Recently rediscovered, the complete tape of the concert lay for almost three decades in a Kalisz basement collecting dust.

We are delighted to be able to say that it has now been remastered by the infinitely talented Marcin Cichy (Ninja Tune), giving all the chance to re-live each musical moment of this historic gig.

This is Lanquidity Records’ flagship release and we could not be prouder nor more grateful to everyone who has worked with us to make this happen.

It was one of the most peculiar landings of the Sun Ra Arkestra.

Time: 7 December 1986, Polish People’s Republic, still separated from the West by the Iron Curtain. It’s a grey and poor twilight of a real socialism era. In three years the Eastern Bloc would collapse, but what still occupies the minds of Poles now is mostly the martial law imposed by the Pro-Moscow regime in 1981, when the country wanted to free itself from the influence of the Soviet Union.

Place: Kalisz, one of the oldest Polish cities dating back to the 10th century, historically connected with the first kings of Poland, grew into a multinational centre with time as not only the Czech Brethren escaping the Habsburg monarchy found refuge here, but also prominent rabbis known across Europe used to operate and expound in the local Jewish community. In the 20th century Kalisz became a provincial city and its presence in the cultural life of Poland was most significantly marked with the International Jazz Piano Festival. It was during the 13th edition of the festival that Sun Ra Arkestra performed.

What turned out to be most memorable for the concert-goers was the closing procession of musicians who left the stage to walk around the audience, circle the venue, and return. Researchers of the Sun Ra mysticism recognized such gestures as rituals of passage corresponding to the cosmic cycles of death and resurrection. From a European perspective, Sun Ra’s work turns out to be a dream come true for Wagner and Stockhausen. His music brought the myth to life. The myth connecting the past with the future – above the unfavourable present – which created a sphere of freedom. However, Ra used to say that it was not freedom that was at stake here, but precision and discipline.

Ra the Myth Maker was an intransigent radical. He perceived the blackness of his race as corresponding to the blackness of space, and thus declared that the Black Community was destined to migrate into space. He would proclaim the Black Myth, which was a manifesto of alienation from the dominant culture of the West, breaking with its order of time, space and values. And so, Ra became the most prominent pioneer of Afro-Futurism, a movement that rewrites history in order to re-incorporate the marginalized race into it.

He was born as Herman Blount in 1914 in Birmingham, Alabama in the South of the United States where racial segregation was still drastic. When he would play in hotels, though already a renowned musician, he had to use the doors and elevators meant for staff. In 1942, after he refused military service, he spent five weeks in prison, and then six months performing public works, from where he was sent away because of a hernia. In 1952, at the age of 38, he got a passport with a new name taken from the Egyptian sun god: Le Sony’r Ra.

He proclaimed that he was not a human, but a spiritual being, and that he had come to Earth from Saturn. He claimed that he had experienced “transmolecularization” as a result of which he was transferred to space, where he learnt the truth about his nature and the world in which he lived. “This planet is like a train station.” He would spread the good word: we are immortal citizens of the infinite universe. And the good word would be spread by an experimental jazz big band Sun Ra Arkestra organized like a religious association. When asked about his inhuman condition, he used to answer without emotion, in a sort of trickster way, that even though he might be nobody here, he is Ra in another existential dimension.

At the same time, the Arkestra has become a social microorganism, a cosmic ark and a scientific laboratory. It’s been around under various names since 1951 and has been operating continuously, despite the death of Ra in 1993, to this day. It’s touched upon an unlimited range of styles, from tribal rhythms and hymnic chants, through archaic forms of jazz and rhythm & blues, swing, exotica and hard bop, to free improvisation, protopsychodelia and electronic noise. Some pastiche, yet essential quotations from popular and classical music, African polyrhythms, eastern modalities and atonality of the 20th-century western avant-garde found a common denominator here.

From the artistic perspective, the Black Myth brought a release of possibilities beyond all divisions. But Ra had yet another viewpoint at the myth. “I’m interested in happiness for people, which is just a myth, because they’re not happy. I would say that the synonym for myth is happiness,” he said. I recall these words looking at an old coverage that appeared after the Arkestra concert in Kalisz: “The entire musical and scene setting, however, seems of little importance in the face of the mysterious energy that emanates from Sun Ra. When he looks from the stage at his Arkestra or the people gathered in the theatre, he is the personification of Goodness and Love.”

Let these words be proof that Afro-Futurism is not Sun Ra’s only domain. I like to think that by giving a concert in Kalisz, on the outskirts of the communist Eastern Bloc, Sun Ra Arkestra gave a black impulse for a change that contributed to the system’s collapse.

Side A
1. Infinity Drum Intro / Discipline 27-II
2. Children of the Sun

Side C
6. Untitled Blues
7. I’ll Never Be the Same