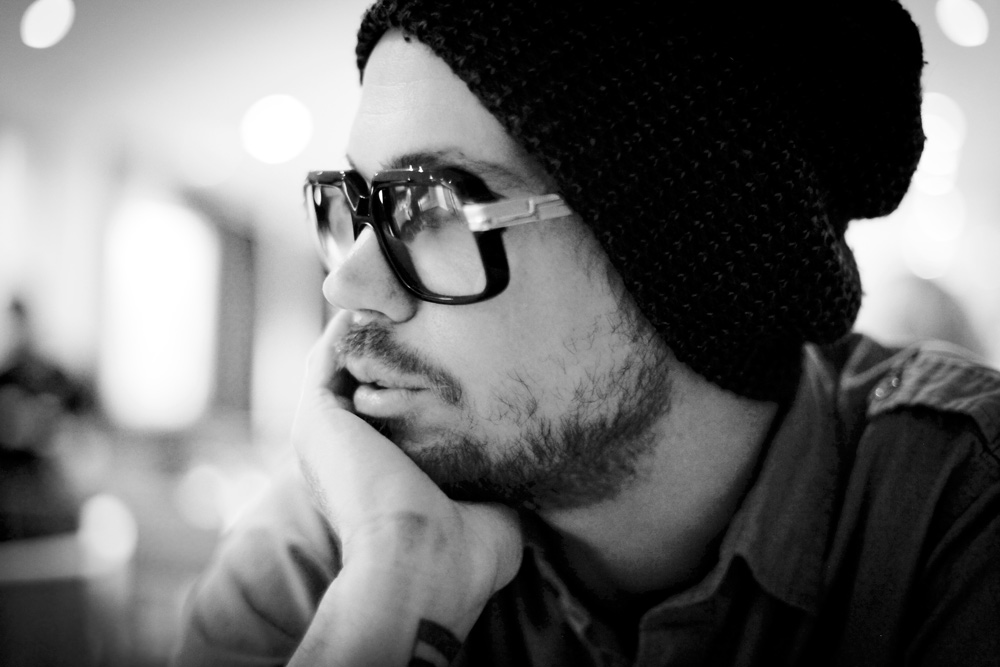 Guillermo Herren, more commonly known as Prefuse 73, has been making his totally unique brand of experimental Electronic music for close to two decades.

Prefuse 73 started releasing music in the early 2000s during a time when people were just starting to experiment with the tempos and tools of ’90s Hip Hop, and he quickly became the forerunner for taking both Hip Hop and Electronic music to the next level artistically speaking. Growing up, Herren learned to play many different instruments and music styles, which becomes present when listening to his music. He’s somewhat of a stylistic omnivore, taking queues from anything and everything, making each of his releases a pleasure to listen to if you’re in the mood for hearing something fresh and exciting. His latest full length release entitled “Sacrifices” will mark his first solo album in three years.

For “Sacrifices”, Prefuse 73 says his focus has shifted from his usual complex composition style in a direction leaning slightly more towards spacious modern minimalism. We sat down with him to talk about what prompted this shift in focus and why it’s been on his mind.

I’m glad you could take the time! Being your first solo album in three years you’ve probably got a lot of press to do, so I’m glad we could make this work.

Prefuse 73: No problem man! Press has been sporadic, I only have one other interview today.

In the description of “Sacrifices” it says that you have become ‘increasingly interested in injecting a sense of space into your characteristically complex productions’. What has brought on this shift in focus?

Prefuse 73: I think it just has to do with what I actually spend my time listening to and doing in my free time. I still feel like my productions can be equally dense but I’m not filling up all of those spaces with ‘tonal’ sounds as much as I’ve done in the past.

Is there any particular reason for this or is it just what you’ve been feeling lately?

I think it just comes from the desire to continually use different approaches to making “Prefuse 73” music in particular. If I kept doing the same thing, I’d just get burned out. I can’t believe I’ve even kept at it this long! [Laughs]

[Laughs] Fair enough! Are there any artists in particular that really inspired you while working on “Sacrifices”?

I was living in upstate NY for a majority of the time and I think I was most influenced by the solitude for the most part. I probably listened to more podcasts up there than music… with a heavy dose of people like Tim Hecker, William Basinski, Nils Frahm – all of whom I’ve listened to for years, but I leaned on them more for atmosphere while I was away from the city.

Would you say you find most of your inspiration from other music or does it more commonly come to you from other art forms?

I think music and environment are equal in terms of my own process, but I do find myself separating myself from as much “beat based” music as possible while working on Prefuse. I also find myself having to work on other projects involving a different process in order to make an entire album of beats, so yes I would say that I’m more inspired by other musics and other art forms for sure. I hope that makes sense. 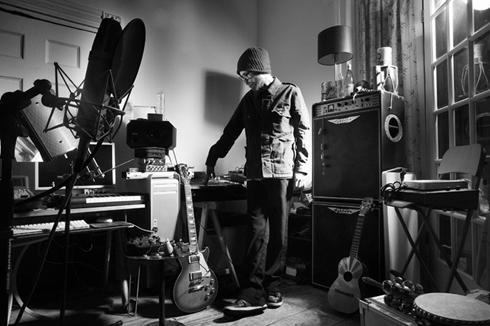 Why do you think minimalism – in many different studies of art and design – has grown in popularity in recent years?

I think it’s because a lot of minimal art forms in all mediums are on display for people that never had the chance to experience minimalism or maximalism before. There was probably never a distinct difference for a lot of folks. Blame it on the internet! [Laughs]

You are someone who knows how to play a ton of different “real” instruments. Why do you think you gravitate towards electronic music when you could really go in any direction?

Over the years, I’ve always done projects that involved a lot more “live” playing and writing but I’ve always had an equal, nerd like interest in all things electronic. The kind of music that I make as “Prefuse 73” just wouldn’t sound right if I played it 100% live, unless it was a specifically “unplugged” album [laughs]. I did recreate a past Prefuse album called “Preparations” with an orchestra in Poland but I didn’t retain the rights, so that ended up being a whole lot of work for nothing.

Your songs usually sound like the re-workings of an accumulation of many different ideas and sonic sketches. Where do things usually start for you when it comes to making a song?

The assumption of re-workings and accumulation is right on. I’ve made so many albums over the course of my career and I have access to those sounds or sessions very quickly… if I can locate the hard drive. At the same time, the main part of me that’s OCD always has to do with the continuity of each album as a whole. I still love the thought of long format albums and don’t care so much about single ideas unless it serves a purpose.

“Sacrifices” is a bit different. I believe that a majority of that record is mostly from fresh “source” content… which kind of sounds like it’s from a grocery aisle! When I was upstate, I only brought two older hard drives so it worked out.

While working on “Sacrifices”, was there something that took you longer than usual to get right?

I think what took the longest was the fact that I was moving around at the time, so the studio acoustics were always different until I was able to sit in one place to get the mixes the way I wanted them to be.

To be honest, I think an EP works if there’s a solid four or five special songs that stand alone. I feel like an album is a continuous body of work. I always felt like the EP should be the songs produced ahead of time, like a teaser of what’s to come. 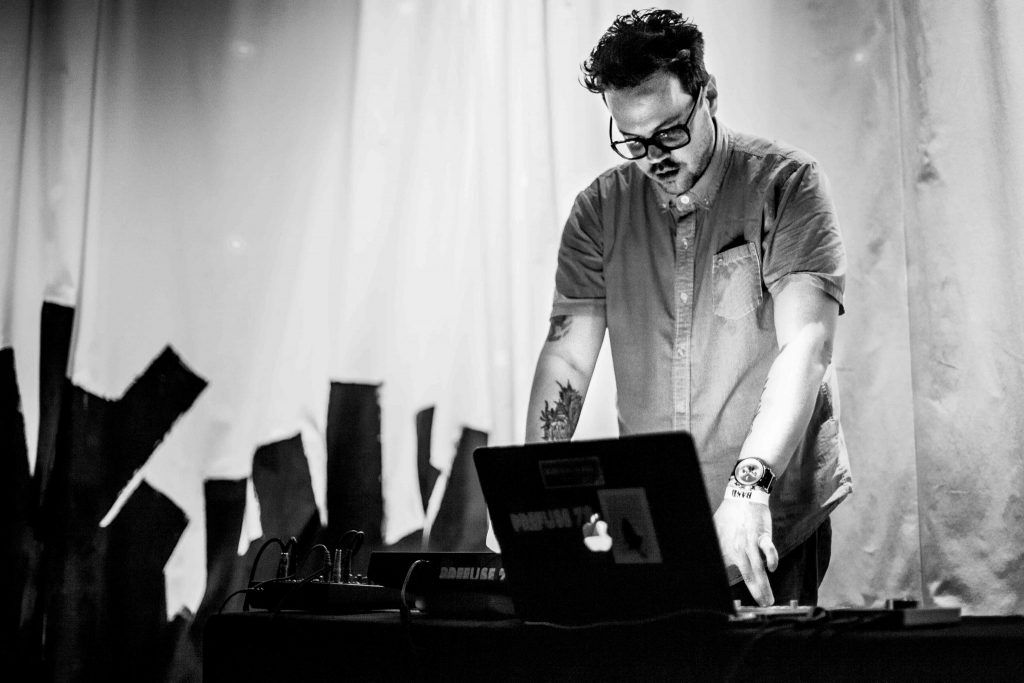 I really admire the fact that you still prefer the format of an LP. It seems like a lot of people have shifted away from it in today’s times of short attention spans, even though when it comes right down to it, albums always make more profound statements.

I agree. When people follow the record industry’s model “for what works”, the actual full length records are going to take a dive with it. If an author I like writes a book, I don’t want to read the first chapter and pretend there aren’t 27 more chapters.

No matter the collaboration, I feel like everything balances out the same. Everyone is navigating their way around different territories. Sometimes it works out amazing, sometimes it ends up on a hard drive for 10 years because both parties couldn’t stand it.

Will you be touring “Sacrifices”, and do you have anything else on the upcoming agenda?

I am indeed touring for “Sacrifices”. I wasn’t into the idea at first but I’m constructing an entire live show based around only MPCS and Pedals. Very archaic and nasty. In the fall I’ll be releasing a double album from my side project: Reto A Ichi on !K7 and also touring for that with a three piece band.

One last question while I’ve got you – What does the name Prefuse 73 mean?

Originally, the name “Prefuse 73” was just an alias to yet another graffiti alias. It originated from the year and type of records I was collecting. Everything I was buying was from 1973, and most of it was before the cheesy late ’70s Fusion era, so I just called it “Prefuse 73”.

Best of luck with the upcoming release and the tours. Looking forward to hearing more from you as always!

Of course! Thanks for reaching out, take care. 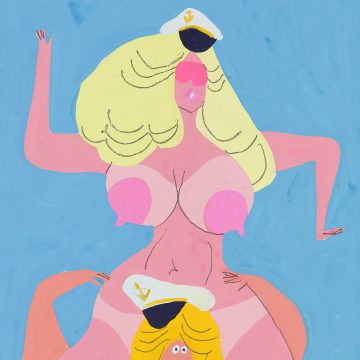