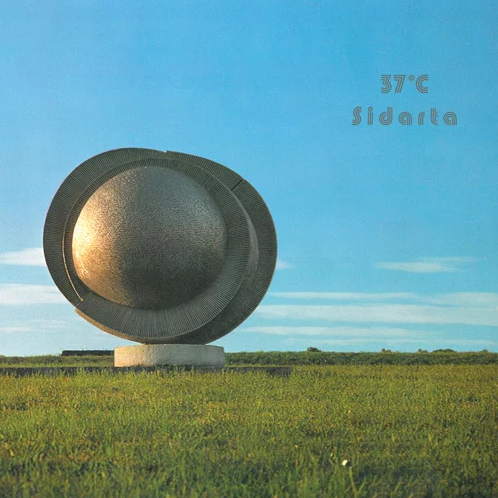 via Discom: Discom’s research on unknown and neglected music from former Yugoslavia continues!

This time we go deep into the 70’s electronic, experimental, fusion und prog rock and we present you group 37°C with their album Sidarta. In the time when Gary Numan recorded “Are ‘Friends’ Electric?” in Gooseberry Studio in London in 1979, a group of skilled musicians, also known as Boban Petrovic’s backing band, booked the same studio to record an album. These were the first recordings ever of Bebi Dol and Silva Delovska from KIM band.

The album opens with the track inspired and named by Herman Hesse’s novel “Siddhartha”. This ambient, psychedelic, experimental 18 min length “epic” piece fits to some extent the cliché how kraut rock and progressive bands perceived electronic music during the 70’s. However, the song arrangement is exceptional and includes variety of sounds and textures from alluring hypnotic celesta, expressive guitar, tuneful bass, fascinating keyboards to supernal vocals and lenient sax and flute. The gradation of arrangement is very exciting as well, especially in the way how certain instruments appear. For instance, drums show up almost at the end of song after vocals, flute and sax whose role is to evoke certain images. Quite unusual, but when we take into account that song doesn’t contain a single touch of anything that can be verbally identified, its meaning is even more mysterious.

Actually, the structure of the song portrays the action of the of novel: Hesse’s hero Siddhartha experiences the perfection as “Brahman” and soon after he steps opposite in order to find his own path and discover himself. In the song, band members are heating the atmosphere involving their complete musical knowledge and skills till the moment when perfection of playing turns into explosion. Likewise in the novel, the part of the song after the explosion is more relevant than part with hundreds of notes before and yet much difficult to play. In that part one may discover itself.

The other songs of the album are on B side. Comparing to the song on A side they have different structure and atmosphere. The first track “Trag” (Eng. “Trace”) contains distinctive singing of Bebi Dol and very good 70’s groove with two keyboard and one guitar solo. The next is “Pescani Sat” ( Eng. “Sand Watch”) an instrumental with very open form and more progressive atmosphere. Then comes the song “Izmoreni Putnik” (Eng. “Weary Traveler”) where all band numbers show their musical skills in a full potential. The last song of the album is “Vrteska” (Eng. “Merry-go-round’’) with unusual 11/8 time signature and weird “street organ’’ melody at the end.

Summing up, this material is very attractive for those interested in unknown sounds of the past, especially when experimental electronic comes from highly skilled musicians. Low quality of production, restricted by technological barriers in the 70’s, is compensated by great ideas and musical courage. These achievements are more significant due the fact that these artists are not coming from one of important musical centers, yet from the province which shined bright just a few times. We hope those shiny moments are in this album.