For the past decade, Eric Porter has meticulously built a canon of Electronic Music that persistently challenges the status quo notion of what rhythm can do… And how it should behave. His take on West London Broken Beat is distinctly tied to culture, rather than trend or sub-genre classification. 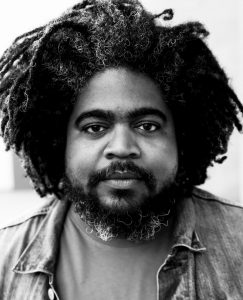 The African and Latin rhythms working through his house music machinations remain distinct and insular. Garnering praise from Gilles Peterson and Georgia Ann Muldrow alike, his Afrikan Sciences alias has facilitated influential label releases from UK based Bitasweet (Bugz In The Attic), Puerto Rico based Amalgama, German-based Rubaiyat, and Gilles Peterson’s Brownswood imprint. All the while Co-heading the innovative Deepblak label.

As evidenced by his Boiler Room set from four years ago and his FACT Mix from 2015, Porter relishes in the role of audible storyteller. Creating these dense, charismatic walls of sound…and then deconstructing them by way of oblique jazz references.

Part cadence dissertation and sound installation, these moments link math, historical reference points and science fiction…with bottom heavy resonance. Its a credo Porter keeps elevated in all his projects. It is rare that he does interviews, so we were lucky to talk with the producer about his current projects. Artistic influences. And what it feels like to be a person of color producing Electronic Music in 2018.

John-Paul Shiver (for MIMS): When you first started to make music. Who were some of the producers/influences that started you on your career? Pushed you to make your own music?

@AfrikanSciences: The Bomb Squad. Particularly their work on Public Enemy and Son of Bazerk. Hitman Howie Tee. Ced-Gee from Ultramagnetic. Divine Styler. The Jungle Brothers. Moving on later into the mid-nineties when the Jungle & Drum and Bass made its way stateside. 4hero, Goldie, Photek, Roni Size. Electronic music filled in the gap when hip-hop started to stray. Bjork, Portishead, Massive Attack and Tricky to name a few.

MIMS: Thank you for that complete answer. You just dropped a treasure trove of masterful producers. What specifically spoke to you in the presentation of sound by The Bomb Squad? And then to back it up, what moved you about Jungle & Drum and Bass in general?

@AfrikanSciences: Definitely the sound collaging ala Romare Bearden. The layering of samples to create a wall of sound, a sense of urgency, storytelling aurally. Jungle and D&B to me was like a repurposing of hip-hop principles. Also, it was like Jamaica was reclaiming what it had a part in inventing, and the stark soundscapes of some D&B had that cinematic element. Once again, aural pictures.

MIMS: From my perspective, The Bomb Squad was always making references backward and forwards simultaneously. Riding James Brown, Sly Stone, Prince and Marva Whitney to the brink. Putting the issues of that time (which remain relevant today) on an alarm. So those sounds were always under duress.

@AfrikanSciences: Yes Man. My ultimate back and forward group is Dr. Buzzards Original Savannah Band. That future retro caught my ear as a wee lad.

MIMS: Sir. Trust me. I am moving towards your musical output. But I gotta jump on that Dr. Buzzards tip. I have heard and seen that record hop in and out of cultural consciousness several times. My parents bumped the hell out of it when they were young. Their elders liked the retro aspect to it. Hip-hop got hold of it, took it for a spin. Now the whole steppers movement is dancing to it. Timeless. Wonderful call.

How did you move into making 4/4 type music? I say that gingerly because your music moves in many directions, but more 4/4 oriented coming out of hip-hop and jungle and drum and bass?

@AfrikanSciences: Well, the house influences were always there right alongside the hip-hop stuff. Not upfront but always around. Frankie Knuckles, Mr. Fingers, The Jungle Brothers even ushered in the hip-house movement. And low key. I was a big Dee-Lite fan.Towa Tei from that group was also a reference point for me stylistically with his solo stuff. Basically, i was well into uptempo music for the dance circles and whatnot.

MIMS: It was fascinating how late 90’s R&B/hip-hop from Missy and Timbaland seemed to be influenced by all the machinations in UK jungle/ drum and bass, UK Garage. Did you observe that?

@AfrikanSciences: Yes. But I personally believe the influences went in both directions. I feel like Timberland and Missy’s stuff ended up being a big influence on what would become the Broken Beat/ West London scene.

MIMS: Ok. Right. Shiny upscale R&B. As opposed to non-champagne jungle/D&B veneer. Gotcha. What always struck me about your music is….You see no reason divide. If anything, as evidenced by the four-track Reciprocity EP, you constantly remind listeners of the close relationships all the 4/4 genre machinations have amongst one another. What was your idea behind that EP?

@AfrikanSciences: I definitely always try to tie the thread between all the pertinent musical traditions that inform my music. Reciprocity is like a letter to the listener. Each song a vignette into the feelings I get from engaging in the creative process with hopes that those who take the time to listen get something out of it too.

MIMS: On the track Son Shine, you captured such a lovely and locked in moment. it just hovers and lingers about. So many different things interacting. When approaching a project, are you adamant to just produce within in a specific genre? Or do you allow a process to unfold?

@AfrikanSciences: Blindfolded usually. Mostly intuition guides moods and techniques. Genres to me can be very difficult to contain a song within because there’s always something there that doesn’t quite sit well within the conventions of standard norms.

MIMS: So tell me about the Old Shady Grady and Neighbourhood Character EP project that you just recently released.

@AfrikanSciences: Old Shady Grady and Neighbourhood Character is like a classic sitcom duo translated into a contemporary and futuristic musical setting. All the shenanigans and hijinx, but emotive. Non-binary, funk intelligentsia.

MIMS: How did this project come about?

@AfrikanSciences: I met Ari on my first trip to Berlin back in 2013. Me and the Deepblak crew were playing an instore, and in comes what looks like a young black teenager. Needless to say, I noticed her. Come to find out she was from The Bay and was out there working on her Masters and she made music to boot. We wasted no time and all of what was to become the Wood Work Collective rallied up at Ari’s crib and commenced to making music. We bonded pretty quick and the pairing of my style and Ari’s was very PB&J like. So every time I returned to Berlin we would continue to build a body of work. We are now on our second release and there is much more material in the vaults.

MIMS: That Wood Work Collective release from last year was really needed. Let me ask you. POC to POC. American to American. Brother to Brother. What is it like for Black artists/producers making Electronic music in 2018?

@AfrikanSciences: Pssssssh….Man its trill out here. You can be lauded as an innovator but rarely do we get that sustained exposure or opportunity as some of your contemporaries. It’s a balancing act already as an artist no matter what your background is.
But there always seems to be only room enough for a few of us at a time. Never mind the so-called need to remain relevant. The road is long and narrow and usually best reserved for those who can endure the ride.

MIMS: I sincerely appreciate your honesty and candor. What is your take on the state of electronic music generally speaking these days?

@AfrikanSciences: I think there is a new wave of musicians out there that will bring back musicality even as technology is moving music in the opposite direction. Where it’s easier not to have any instrument proficiency, there is this undercurrent of people that fit in-between both of those worlds. We will see where it goes. I know there is a general feeling that its all going downhill. But I remain hopeful, idealistic, and ever the dreamer.

MIMS: Last Question: Who are some artists right now. New or Old. Catching your attention.

MIMS: Thanks so much for taking the time to do this. I appreciate it, Eric.

@AfrikanSciences: You are welcome, man.