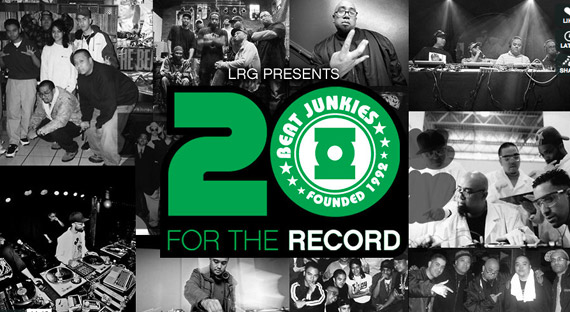 Beat Junkies: For The Record (Documentary)

via Stones Throw: On the heels of their 20th anniversary show this past weekend, and the release of the first in a series of 45s, the Beat Junkies have released a documentary about their 20 years on the turntables.

The World Famous Beat Junkies, comprised of members J-Rocc, DJ Babu, D-Styles, DJ Rhettmatic, DJ What?!, Mr. Choc, Icy Ice, Curse, DJ Shortkut, Melo-D, Symphony and DJ Havik have been putting in work on the turntables since they were first established in 1992. Known internationally as the premiere DJ crew, their longevity is a testament to their immense musical talents. In celebration of the legendary Beat Junkies, LRG presents For the Record – a short documentary profiling the collective with contributions from the likes of A Trak, Q Bert and Peanut Butter Wolf – with DJ Jazzy Jeff commenting that “there are no DJ’s out today that haven’t been influenced by the Beat Junkies at all.”

The Beat Junkies are heading out on the road for an international tour with stops across the US, Europe and Asia – tour dates coming soon.

Check out the Beat Junkies letterman jackets by LRG

Rakim "Definition of a Classic" (Mini-Documentary)