Another bumper edition of Crucial Material full of essential listening. This week’s edition proves again that there is still much to explore in the interplay between jazz and electronic music, new forms and old ways, from Kaidi Tatham’s keys & drum programming to Damon Locks coupling live jazz and sampled loops

But there’s a lot more music demanding our attention too, from UK hip hop to broken techno. Here are our favorite EP’s, Albums and Reissues of the past couple of weeks. As always we encourage you to buy digital or physical releases if you discover a release you love. Support artists and labels!

Kaidi Tatham — An Insight To All Minds

As jazz continues its renaissance, its future has never been more exciting; and Outlines is a great demonstration of the talent driving it in new and unexpected directions. — Selected by Jed Hallam

Three of the most talented young Venezuelan musicians arranged a one day session to record four original compositions. The result is a stunning take on the traditional jazz trio. — Selected by Miguel Colmenares

Harpist Amanda Whiting steps out from the shadows of Matthew Halsall’s Gondwana Orchestra to create a sublime harp-led album for Jazzman Records, leading her own accomplished trio in the footsteps of Dorothy Ashby. — Selected by Oli Brunetti

Off kilter RnB musings from this self produced artist who brings a unique sound to his debut album. Mournful yet soulful disjointed production complements the eerie vocals — Selected by ASMA

Narcy – Meme Against the World

Producer Jamvvis teams up with MC DO the Outcast to pay tribute to their shared love of japanese culture. Dark beats and broody rhymes balance out in this stellar effort — Selected by ASMA

Cinematic boom-bap from the UK MC/producer. Following February’s beat-tape, Bxnjamin refocuses on the rhymes, over beats by Dela, wun two, Made in M, etc — Selected by Oli Brunetti

One of Europe’s finest beatmakers is back with an amalgamation of grooves on his latest album. Featuring regular collaborators Bluestaeb, Abase & Melodiesinfonie, get ready for a journey of 80s boogie, 90s soul, sprinkled with a jazzy beats esthetic. — Selected by Spacewalker

An exciting collaboration between two prolific artists. The epitome of soulful grooves. With guest appearances from the likes of Omar, Josh Milan & Phonte, you already know it’s a special affair. — Selected by Spacewalker

Prequel – And That’s The Story Of Their Love

The debut album from Melbourne’s Prequel draws in references and influences from a broad musical palette, combining them to turn in a fantastic album that feels like it would feel just as at home in Ronnie Scotts as Corsica.  — Selected by Jed Hallam

Colourful yet dusty broken house and techno for your daydreaming sessions. — Selected by dileta

High speed and high precision techno wigglers! As rave ready as it gets! — Selected by dileta 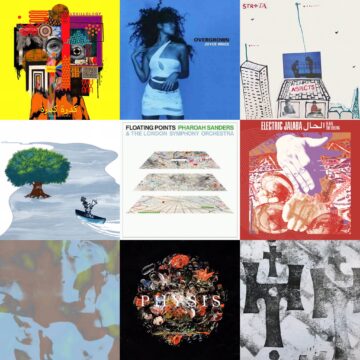