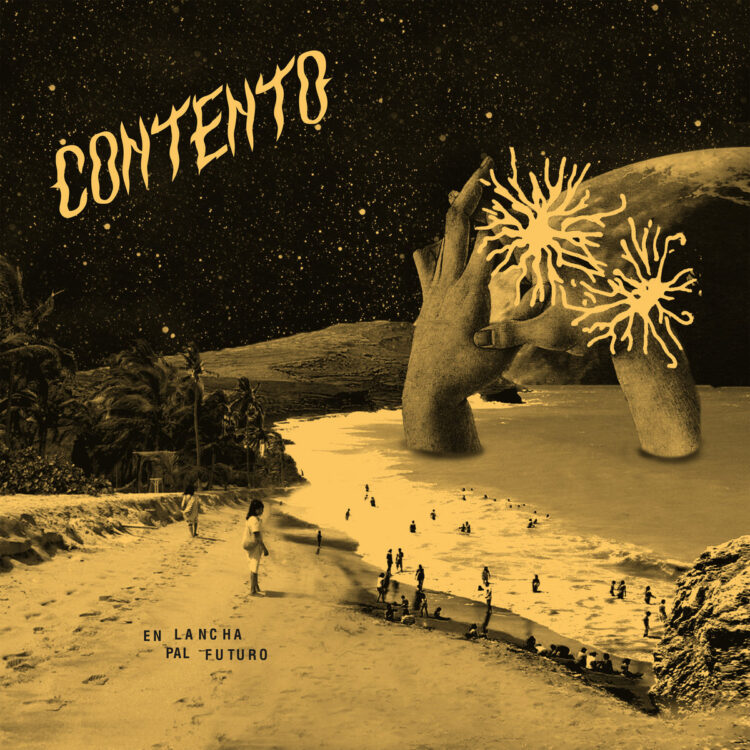 Contento, El Palmas Music’s duo of über-hip expatriate Colombian ‘salsapunks’ are back. We are excited to premiere “Chevere Cumbé”.

Contento’s first album, ‘Lo Bueno Está Aquí’, was an artistic and critical success. Their follow-up, ‘En Lancha Pal Futuro’, builds seamlessly on its predecessor. Yet it could not have been recorded in more different, and difficult, circumstances.

The duo’s debut was laid down between 2016 and 2019, a period when the two European-based Colombians, who met at an Eddie Palmieri concert in Berlin, were able to take some serious time off from their diverse individual projects to explore a new vision for salsa. Paulo, a member of Acid Coco, Jaguar and El Dragón Criollo; and Sano, a DJ and producer known for his minimalist Latin house releases for the Cómeme label, crystallised on their debut what Paulo describes as “a new salsa sound that may also make [listeners] want to discover some of the older sounds, too.” That sound is a kind of ‘retro-smart’ combination of Nuyorican boogaloo from the ‘60s and cumbia from the golden age of Discos Fuentes.

But then along came COVID. Sano left Barcelona to return to his native Colombia. With one half of the Contento team holed up in the mountains outside Medellín, communications became increasingly challenging. “Send me something,” Paulo urged his colleague, “Do me something on the piano.” Sano obliged, sending over a number of piano tracks which Paulo worked on during an intense fortnight in his Geneva studio, adding lyrics and further instrumentation.

From that period came “Al Lao Del Rio”, a boogaloo with an irresistible keyboard riff, an upfront electronic bongo beat and urgent vocals; “Donde Está Mi Gente”, a slower number with sleepy vocals and squelchy synth; the Latin garage rock tinge of “Guajira Espacial”; and the final, longest track, “Voy Contento”, which, maybe more than any other track on the new album, revisits the signature sound of their debut. Is that jingle-jangle Byrds-like guitar sound really a guitar or an electronic keyboard? Is that a real female chorus or some production trickery?

To the untrained ear, the other six tracks on the album are pure Contento. But, in truth, it wasn’t that simple. Lack of a decent studio or reliable internet effectively nulled Sano’s involvement, and so Paulo looked at unfinished material they had begun years prior. Heartened by what they already had in the bag, Paulo finished on his own what they had previously sketched together. “I feel him very close,” Paulo reveals. “I know what he likes and everything.” He describes how he took the title track, for example, and “broke it down, put it back together, gave it structure. I changed a bit… the melody of the voice; I added bass, added what I had to add. I finished producing it and I had another song.” Listening to it, you can hear how he works around the organ riff and deep timbales sound, adding the typically repetitive vocals and all the other layers to build it into something hypnotic and irresistible. Of the other five, “Sigo Llorando” suggests it was recorded in some kind of space station, with the ringing guitar sound and electronic percussion bombarding the listener with a shower of aural asteroids. “Pobre Humanidad” is almost but not quite the album’s only instrumental. And “Brillo y Figura Hasta La Sepultra” is the closest thing to the kind of Nuyorican salsa that first brought the pair together.

Alone in the studio he might have been in the end, but Paulo artfully invokes the presence of his absent partner to summon up the spirit of Contento and the spirit of Colombia.