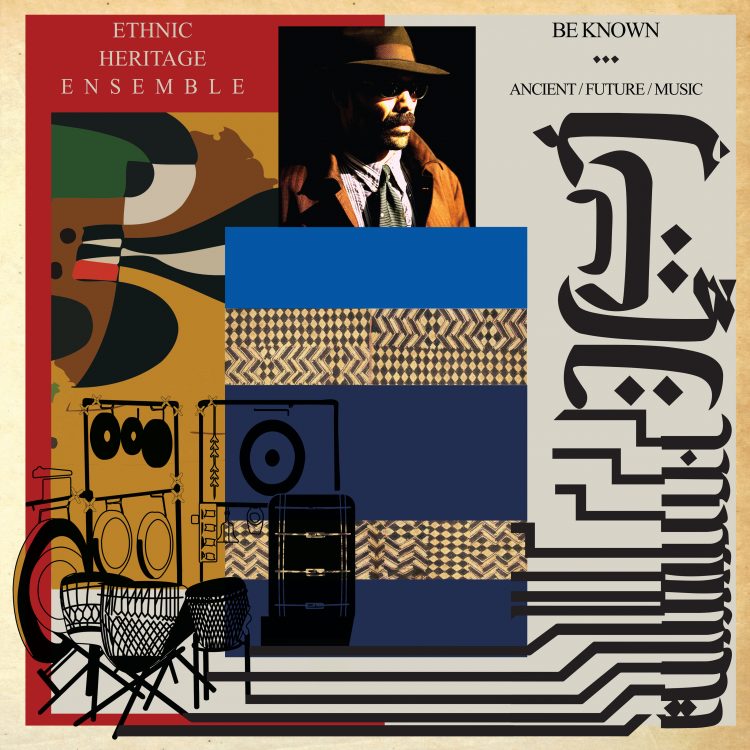 “The Ethnic Heritage Ensemble’s music…seeks to spark a time in which heightened sensibility and higher consciousness will universally be known.” Howard Mandel, jazz critic and author

Recently celebrating an extraordinary 45 years in music, the Ethnic Heritage Ensemble, led by legendary Chicago drummer and percussionist Sir Kahil El’Zabar, are pleased to announce the release of their latest album, ‘Be Known: Ancient/Future/Music’, released 10th May via Spiritmuse Records.

An artist truly in a league of his own, El’Zabar is acknowledged throughout the world as the leader in the vanguard of spiritual groove and afro-futuristic jazz with a significant contribution in the continuation of the scene over the last four decades. His driving compositions – simple themes that gain complexity through repetition and improvisation – have been recorded with such jazz heavyweights including Pharoah Sanders, Kalaparusha Maurice McIntyre and “Light” Henry Huff and he has toured with some of the biggest names in jazz including Dizzy Gillespie, Cannonball Adderley, Nina Simone, Stevie Wonder, Archie Shepp, Lester Bowie, Nona Hendryx, Billy Bang, Hamiet Bluiett, and David Murray.

Forming EHE shortly after El’Zabar graduated from the fabled school of the Association for the Advancement of Creative Musicians in 1973, he teamed up with tenor saxophonist Edward Wilkerson, Jr. with the goal “To combine concepts of African American music with its earlier roots in traditional African music, to produce new motifs and sounds true to their origins yet firmly pointed in a new artistic direction”. Forty-five years later and the rich and compelling, ever-evolving sound the band are known for, is still going strong.

Together with the Art Ensemble of Chicago, the Ethnic Heritage Ensemble are one of the two remaining original groups in the world today that were nurtured in the AACM. “I knew in my heart, that this band could endure,” El’Zabar attests. “My concept was based in logic as it pertains to the history of Great Black Music. In other words, the Ethnic Heritage Ensemble has a strong rhythmic foundation, innovative harmonics and counterpoint, well-balanced interplay and polyphony among the players for highly developed ensemble dynamics. We are strong individual soloists with an in-depth grasp of music history, originality, fearlessness and deep spirituality.”

Alongside multi-percussionist and vocalist El’Zabar, the Ethnic Heritage Ensemble’s current line-up includes Corey Wilkes on trumpet, who has worked with numerous jazz masters, including Wynton Marsalis, Kurt Elling and with El’Zabar for 15 years, multi-instrumentalist Alex Harding on baritone sax and Ian Maksin on cello, known as one of the most versatile and innovative musicians of his generation, having worked with such diverse artists as Andrea Bocelli and Sting.

Following on from the success of the 2014 album ‘Black is Back: 40th Anniversary Project’, ‘Be Known: Ancient/Future/Music’ is an electrifying mix of spiritual jazz and African rhythms. Compositions such as the thrilling ‘Blew It’ are built around fundamental brass improvisations with a swing-induced groove, while El’Zabar’s vocal chants on ‘Pharoah’ whip up a trance-like fervour, as we are taken on a sacred journey of enlightenment and deep listening.

With artwork designed by the Toronto-based interdisciplinary artist Nep Sidhu (Erykah Badu/Shabazz Palaces), EHE’s ability to consistently push new boundaries with Afrocentric rhythms and free-flowing jazz says a great deal about El’Zabar’s commitment to the music and the message.

In a long and successful career, El’Zabar has recorded more than 60 acclaimed projects and has scored music for feature films including ‘Mo Money’, ‘Love Jones’ and ‘America the Beautiful III’. He also scored arrangements for the theatrical version of Disney’s ‘The Lion King’. In 2014, Sir Kahil El’Zabar was knighted by the Council General of France, as a Chevalier. He is also a published poet and a painter.

In 2019, Dwayne Johnson-Cochran’s documentary ‘Be Known’, an eyes-wide-open look at the jazz giant, will receive its worldwide premiere on Amazon Prime. The award winning film was produced by Hollywood actors Angela Bassett and Courtney Vance.

The Ethnic Heritage Ensemble recently concluded their sell-out North American tour and will perform a number of must-see shows throughout Europe this spring including the album launch at the Church of Sound, London on the 28th March.

Spiritmuse Records is a new independent record label dedicated to unearthing hidden gems from past and future, music for both mind and spirit, while exploring the world of deep, soulful, avant-garde jazz and its infinite world music influences.