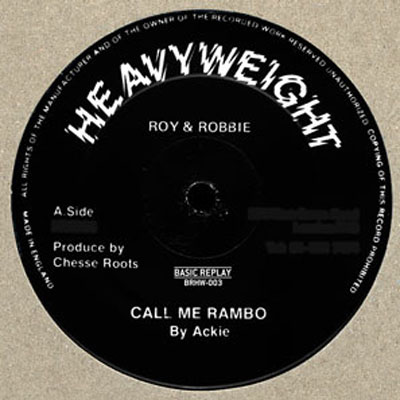 Crucial UK Dancehall treasure from the mid-80’s originally released on the Heavyweight label (also a UK based sound system), featuring production by Chester Roots and Ackie on the vocals. You will also recognize a very nice appearance from a Commodore 64 sample at the beginning of the track. Killer Helicopter intro, the same as Noreaga’s classic “Superthug” hip-hop record of the late 90’s.

I can only imagine what it must have been like to hear “Call Me Rambo” in a club in 1986 alongside US hip-hop, early House records and Jamaican/US and UK Dancehall. The record opens up with a bang and never really lets you go. Absolutely raw and deadly production (check out the dub version as well) to go along with Ackie’s vocals which are definitely on that Barrington Levy vibe.

Also check out this killer version by Dennis D Selector on the same riddim.