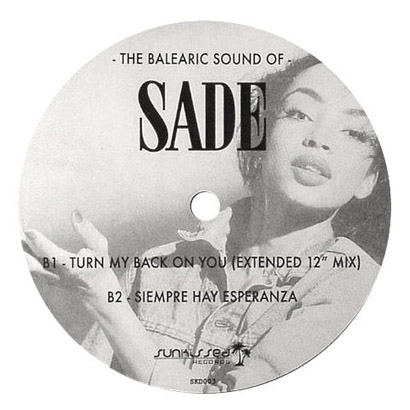 The third offering from the indisputably Balearic imprint Sunkissed Records comes in the shape of four dreamy tracks from the sultry Sade on a nice vinyl reissue. First up is the 7-minute US remix version of 1984’s ‘Hang On To Your Love’ – a sun-drenched hypnotic aural soother with a downtempo laidback groove and Sade’s unmistakable silky-smooth, honey vocals. Next up on side A is the extended version of 1988 ‘Super Bien Total’, a superb instrumental with seductive bassline and mesmerisingly anodyne flutes. Side B features two more blissful Balearic treats – the tranquil extended 12” mix of ‘Turn My Back on You’ and the haunting ‘Siempre Hay Esperanza’. A must-have EP for any fan of the Balearic subculture and Sade lovers alike!

(Balearic Beat, also known as Balearic House, initially was an eclectic blend of DJed dance music that emerged in the mid-1980s. It later became the name of a more specific style of electronic dance music that was popular into the mid-1990s. It was named for its popularity among European nightclub and beach rave patrons on the Balearic island of Ibiza)