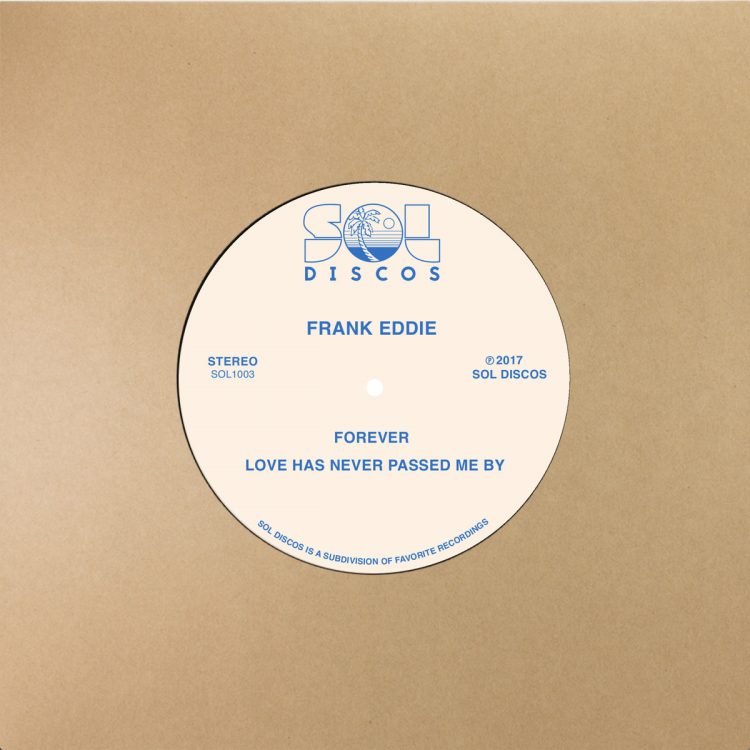 via Favorite Records: SOL DISCOS is honoured to introduce its 3rd reissue, with these two songs from Frank Eddie “Love Has Never Passed Me By” & “Forever”.

While the original record’s been known by a handful connoisseurs, very few people are actually proud owners of it. Originally released on the private INSYNC label by Mr. Eddie himself, most of the 1000 pressed copies where abandoned in some random houses he used to live in, in South Miami, Florida.

Frank Eddie’s music life started with piano at the age of 13, when he was living in Yonkers, New York in the early 60’s. At this time Soul music was everywhere around and Frank quickly switched to guitar, which has remained his instrument since then. Influenced by Soul as well as Rock Music, Frank met with drummer/singer William Hopkins after settling in Florida. They created a band together, and played music with talented Jazz students from the University Of Miami (Curtis & Carmen Lundy for instance). At the time, they would also jam with people that would later become famous: Steve Morse (Deep Purple), Jazz steel-band player Othello Molineaux, or Jaco Pastorius to name a few. Surrounded by such a creative musical environment, Frank & William co-wrote the two songs you have on this record. They gathered the personnel and recorded within a four days’ time.

After a couple of unsuccessful meetings with majors, and partly discouraged by the way music business was conducted, Frank decided to self-release a single record. He then worked on his own to sell it locally, without actually meeting the audience it deserved. According to the singer, “The black radio stations would not play it because I did not give them cocaine or money, and the disco clubs had their own list to promote”.

Several decades later, SOL Discos’ A&R and DJ, Waxist, got introduced to Frank Eddie’s beautiful music through “Independant Movement” radio show of Mark Gurney in UK. After months of researches and with the help of US digger Josh Goldman, he’s been able to establish contact with Frank and to get his approval for officially reissuing his music.

Today, Frank Eddie is still active by playing American Rhythm & Blues and Jazz in Cuba, as well as supporting the Cuban musicians, bringing instruments to the Caribbean Nation.