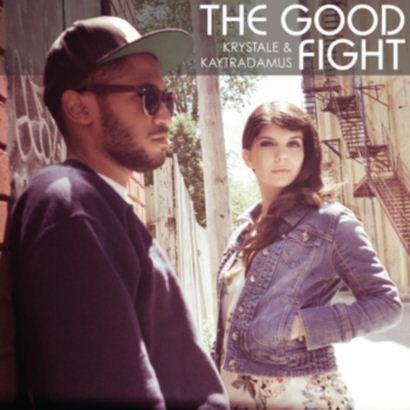 After the success of their first collaboration on “Caught Up (Remix)”, Krystale and Kaytradamus took their partnership a step further to create an EP. The combination of Krystale’s jazzy-raspy voice and Kaytradamus’s inspired and unique beats create one singular whole that could charm everyone.

The Good Fight presents five new songs, which showcase the respective talents of both artists. They worked together on the arrangements of this EP to present a lush sound that varies from electro-inspired melodies (“The Good Fight”, “No One But You”) to up-tempo songs with a dance influence (“On The Run”, “Time To Go”).

Krystale, a young singer-songwriter with Dominican roots, has a voice that has been compared to some of the greatest singers, such as Norah Jones, Fiona Apple and Sarah McLachlan. The 21-year-old singer already shows a surprising maturity in her writing and voice. Her versatility is one of her major assets. She passes easily from new soul to jazz to R&B.

Everyone who has enjoyed her music falls under the spell of her enchanting voice. Our American neighbours have already found her talent to be exceptional and refreshing. Chosen as the artist of the month in February by Giant Step, a New-York company that helps stars like Amy Whinehouse, Adèle and Bjork to propel their careers, and selected for the May cover page of the Amped Souds magazine from Philadelphia, Krystale has certainly debuted an international career.

Kaytradamus, a 19 year-old talent of Montreal, has started to get recognized as a future star in the Montreal beat world. He has multiple sources of inspiration ranging from disco, the funk of the 1970s and 1980s to hip-hop, rap, techno and electro, Kaytradamus certainly knows how to mix and create beats increasingly more original than involving.

After only three years in the industry, he has already produced an impressive collection of beats. With ten albums under his belt, the creativity of the young beatmaker seems to be infinite.
To discover their universe