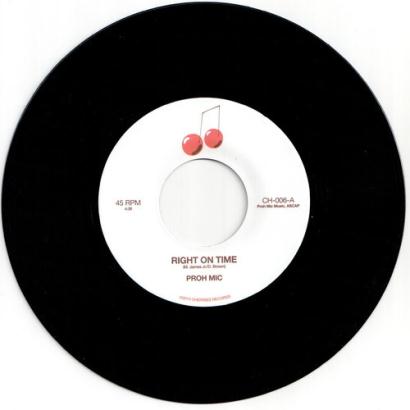 For this week’s show, I had Dr.MaD who came by to drop a few exclusives, so I had to be a little more selective with my tracks selection. I realized that I haven’t played one of my favourite 45’s : Proh Mic – Right On Time , released on Cherries Records. It’s the perfect “feel good”, dance-floor modern-boogie funk track; intoxicating bassline, contagious rhythm, and the vocals are on point.

Cherries Records have been releasing a lot of modern funk gems in the past 2 years, and artists such as Amalia, Tony Ozier, Cermakk, Doug Shorts, Benjamin and Social Lovers, are what makes this record label a reference in the Future/Modern Funk genre. Co-Owner Andrew Brearley and Shred One are constantly pushing forward to release quality pressings, and be on the lookout for more, because I feel like it’s only the beginning, for this Chicago based label.

Mix of the Day: "100 Years Of Sun Ra : Beneath The Sun" by Jazz Amnesty Sound System