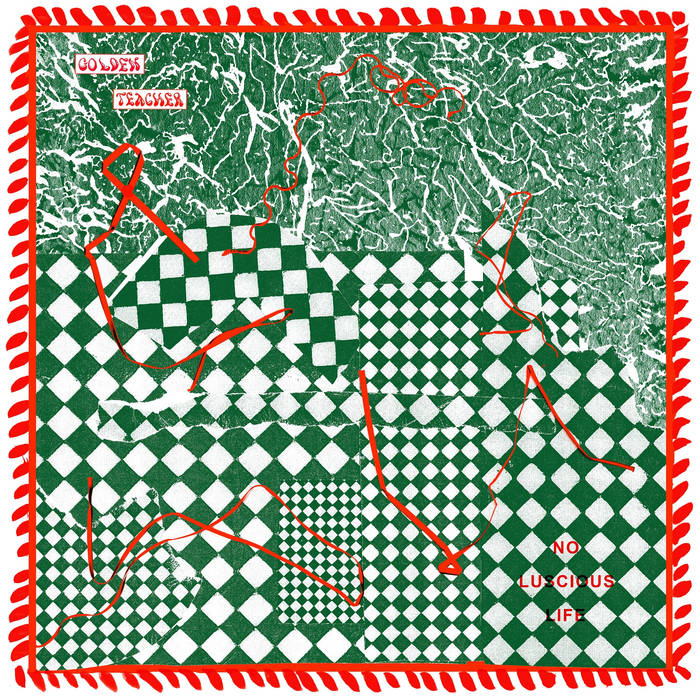 via GTR: The band known as Golden Teacher is proud to release its long player: “No Luscious Life” – seven proximate cuts lovingly collected from the group’s work within the velveteen walls of the notorious Green Door Studio.

This is not an album by any intention or through any concept. Instead the errant sextet offers these stage-honed compositions and studio-led explorations to all interested parties in strict favour of the need for release. Call it what you want, this is very simply more music from Golden Teacher.

As “No Luscious Life” is the band’s longest offering of new tracks to date, it’s about time: a pop funk essay against wage labour and its lassitudes; a drum-driven homage to Senegal’s legendary poet Aby Ngana Diop; a propulsive ballad about two star-crossed lovers stuck downtown in the middle of an interstellar journey; a sweet & low last dance upon the stage of Liverpool’s late, great Kazimier club; a disorienting dive backwards into early terror of the animate shadows of childhood; a harvest song sung by machines in the autumn sun of a fully automated society; and the impressionist clamour of the eponymous grand finale’s tentative chamber music.

Golden Teacher hopes the seven sections of this catalogued effort – coincidentally comprising GT’s seventh original release on vinyl– serve as seven more essential, non-sequential parts of a long-legged body of work that remains rangy in its nature and still unknown to itself. All elements performed and recorded at intervals by Golden Teacher, and engineered in concert with Emily McLaren & Stuart Evans, at Green Door Studios, Glasgow, edited by the band, and mastered by James Savage. Original album artwork by Oliver Pitt. This is a genuine Golden Teacher product: accept no substitutes.