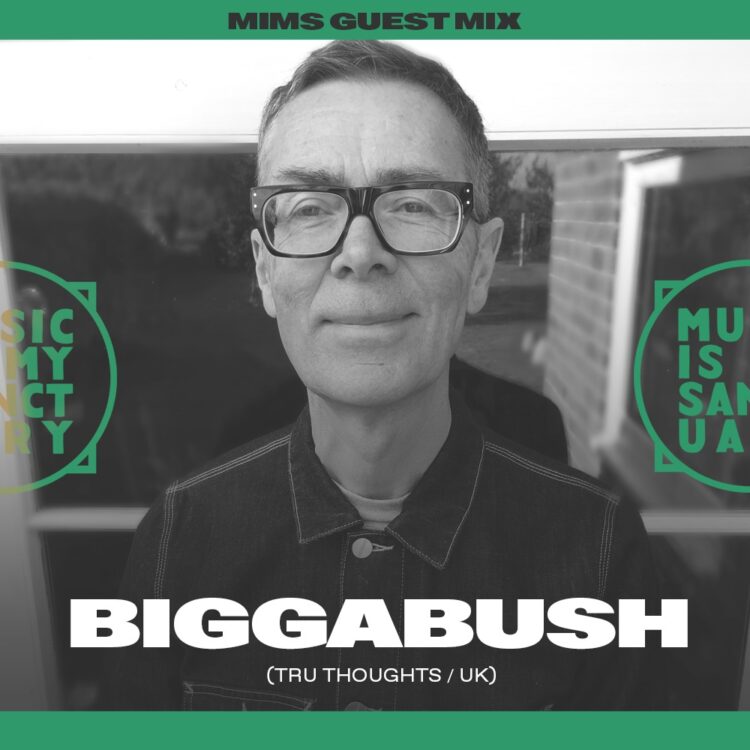 We are delighted to share an eclectic mix from Glyn “Bigga” Bush, a musician, DJ and producer based in the UK, originally half of Rockers Hi Fi, now making music as the Magic Drum Orchestra and BiggaBush on the Tru Thoughts label.

This selection complements the Bigga’s Fave Reworks playlist not least because it includes some tracks that aren’t on Spotify – possibly for legal reasons….

We open with the Robot Riddims remix of Black Swan Revival from BiggaBush Freevisited.  I have seen Duck (aka Robot Riddims) DJ with Bam Bam many times and love his exploration of 8-bit sounds and heavy bass under his Robot Riddims alias.

Next up is a track from the MDO’s DNA of Rhythm album which was inspired by the track that follows, Burning Spear’s dub of Invasion from the Marcus Garvey LP.

An early influence on Rockers Hi Fi was Renegade Soundwaves’ In Dub record,  so we go with their Black Eye Boy next before a short interlude from 45 Prince leads us into the Shoes rework of the Roy Ayers classic.

In 2016 a group of DJs and producers including Mr. Thing were given access to John Peel’s massive record collection and allowed to grab sound samples in order to build new tracks.  The result was an EP called Nothing Leaves the Archive and the next track is Mr. Thing’s contribution.

This is followed by the Abstract Orchestra on the All Things Analogue (ATA) label doing their version of a Madvillainy track.

Then we go to Coburg – a suburb of Melbourne, Australia – for a tune by the excellent Surprise Chef.

Moody White was an alias of Rockers Hi Fi (a “moody white” being an unidentified white label, often with bootlegged material on it). This date from 1996 features Farda P repurposing a Max Romeo lyric.

Amerigo Gazaway is a master of the mashup and his Bizarre Tribe album combines the music of A Tribe Called Quest with The Pharcyde, as heard on this cut.  Then we get the OG of Stephen Marley’s Traffic Jam before the tempo goes up a notch for another Shoes rework – this time a remix of Sole Sister, also on the Different Style EP.

We then segue into an Opolopo rework of Headhunters God Made Me Funky which mixes into Pedders Akula –  borrowing heavily from the Funkees Akula Owe Onyeara.

The final two tracks also feature on the Different Styles EP – a beautiful rework of This River by Sentinel 679 and the Rhythm & Sound-influenced Rising Dub of Real & Regal.

Out this week, “A Different Style EP” is the remix EP follow up to ‘Biggabush Freevisited’. Highlighting a variety of bass-heavy styles, the release features reworkings from Sentinel 793, Robot Riddims, James Hayford and Gerry Hectic, ranging from 8-bit electronic dub to deep house disco and bruk.