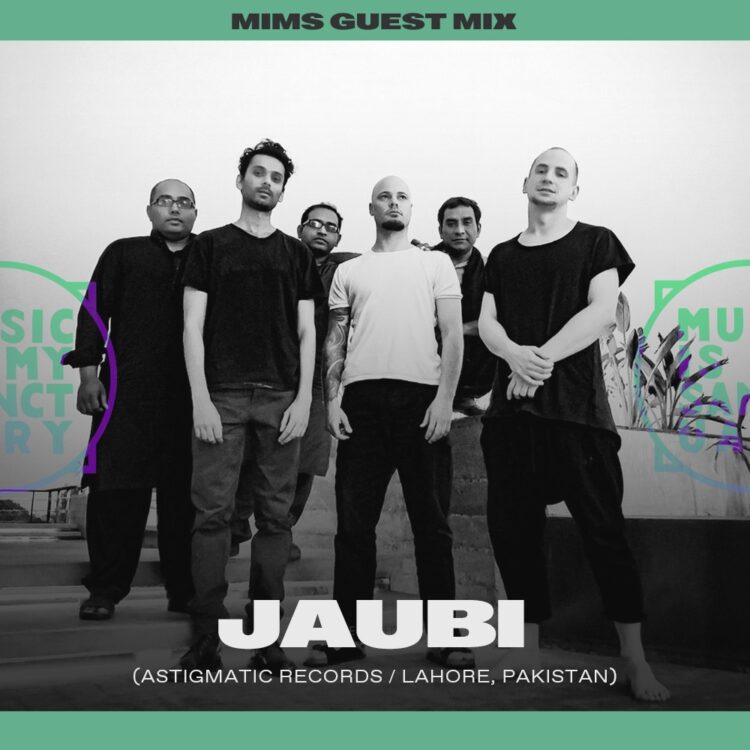 Ahead of their debut London show tomorrow evening at Highbury’s Union Chapel, Lahore-based Jaubi recorded an exclusive mix for us.

“A collection of songs and beats from artists that have helped to inspire our sound. Our music has been described as a blend of North Indian Classical, Jazz and Hip Hop – we hope this mix take’s you on a journey and inspires you to come and check out one of our shows this August.”

Catch Jaubi, featuring saxophonist, flautist and producer Tenderlonious, performing music from their ‘Nafs’, a MIMS Future Classic released last year on Astigmatic Records, and ‘Ragas from Lahore’, the Tendonious led LP on which they also collaborated, live at the legendary Union Chapel in London, tomorrow evening 18 August, or around the UK later this month.

Jaubi (pronounced “Jaw-Bee”) is an instrumental quartet from Lahore, Pakistan. The band is named after an Urdu word loosely translated as “whatever/whoever”. Creating whatever sounds good and whatever feels good is the groups guiding principle. Their music skips around the genres of North Indian Classical music, modal jazz and hip-hop.

Around 4 years ago the band were at a turning point in their lives, each member was facing personal problems and difficulties. Their combined struggles led JAUBI to discover the complex Qur’anic and philosophical concept of “Nafs”. In Islamic philosophy, each person has an aspect of the Self called the “Nafs” which is divided into multiple layers. Every day, a person enters a spiritual battlefield with their dark side, their lowly desires, and Satan. Satanic Nafs is thus the lowest level of the self, due the love of oneself and evil desires. Achieving spiritual transformation involves a constant struggle against the lower nature of the self (Satanic Nafs). This path of discovery would soon become the major conceptual driving force behind a cross cultural collaboration with musicians from Poland and the U.K.

The journey began back in April 2019, when 22a label founder and multi-instrumentalist Tenderlonious and EABS/Bloto keyboard and synth maestro Marek ‘Latarnik’ Pędziwiatr travelled to Lahore in Pakistan to take part in some improvised recording sessions with Jaubi. Nothing whatsoever was written down during the recording sessions – no sheet music, no song titles. It was sincere. All egos were left behind and hearts and souls were open and poured into the music. Two quite remarkable albums came from those recording sessions, both of which have been met with mass acclaim. The music has been described as spiritual jazz-fusion meets psychedelic Hindustani classical with nods to golden era hip hop. Both albums were featured as The Guardian ‘Global Album of The Month’ and were included in their album of the year lists in 2020 and 2021 respectively. They received coverage and support from some of the world’s key tastemakers and publications, such as Pitchfork, Rolling Stone, Gilles Peterson, Downbeat, The Guardian, Mr Scruff, Jazzwise, Mojo, Iggy Pop and many more.

Following the success of these two recordings, the dream has always been for Jaubi to come to Europe and the U.K. to complete the final piece of this unique cross-cultural collaboration. In August this year that dream is becoming a reality thanks to the support of Dialled In, Chalo, The British Council & The Music Venue Trust Revive Live Tour. The band will be performing a headline show at London’s iconic Union Chapel, followed by a week-long studio session at Real World studios in Bath. They will then hit the road for a 5-date regional tour of the U.K. performing tracks from ‘Nafs at Peace’ & ‘Ragas from Lahore’ as well as treating audiences to new music. This will be the very first time this music has been performed live in the U.K. and possibly the last. Audiences will be treated to a truly unique collaboration between musicians from Pakistan, Australia, Poland, and the U.K. – “whatever/whoever”.