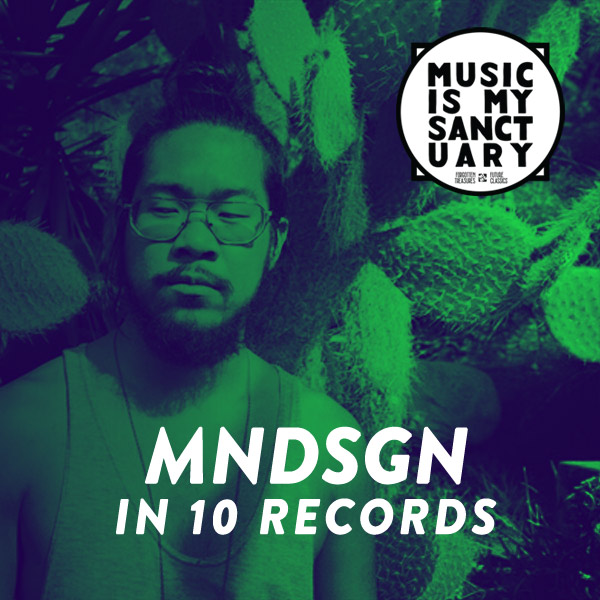 We have been fans of MNDSGN (pronounced Mind Design) aka Ringgo Ancheta for quite some time now. Since the late 2000’s the Philly born, LA-based has been making a name for himself in the “beat scene”.

But contrary to most of the movement which tends to follow formulas, he makes some of the most original, organic and free music out there. We are such huge fans of his recent “Yawn Zen” LP on Stones Throw, that we featured 3 songs in our most recent monthly show.

We asked him to tell us about a few of his favourite records.

Giles Giles & Fripp – The Brondesbury Tapes, The first incarnation of King Crimson. Big ups to Lord RAJA for puttin me up on game.

Steve Kuhn – Thoughts of a Gentleman, What else are you gonna do on a desert island, but reflect in your solitude?  This record is that vibe.

Mobb Deep – The Infamous, Let’s be honest.  Every party could use at least one track from The Infamous.

KRS One – Step Into A World, I’m pretty sure this song, as well as the video, was one of the reasons I started bboying.

Little Brother – The Listening, So soulful. This era of 9th wonder’s production was my shit.

8. Last DJ mix you had on repeat

a young Nas x Jay Dee, One of those things you wonder why never happened.

Cutty Ranks – A Who She Ne Dun, I did a set at my cousins’ bar in Philly some years ago.  Needless to say, heads were not tryna listen to some beats.  Dancehall is hella fun tho.