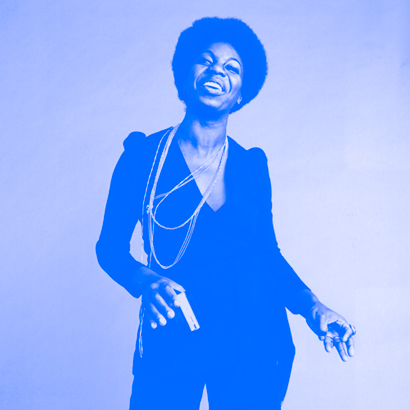 “The Real Nina Simone” 1968 Interview in Down Beat Magazine

via Down Beat Magazine (January 1968): I heard Nina Simone for the first time in person in October at the Village Gate. Impressed, I readily agreed to the suggestion of an interview by a press representative of the company for which she records. We met at noon in her manager’s carpeted and well-appointed Fifth Avenue office.

In addition to being bugged, as always in midtown Manhattan during the working day, I had a dandy hangover. But my spirits were soaring compared to Miss Simone’s.

Downbeat: You are going to Las Vegas next week. I understand there is a reason you never worked there before.

Nina Simone: Same reason I haven’t worked a lot of places, I guess.

D: Has it changed out there?

Nina: I don’t know what you mean.

Nina: Lots of towns are segregated where I’ve worked. I don’t know if that has anything to do with it or not.

There was a long pause here, ended by her manager, who is also her husband. “What kind of thing are you doing? We’re not interested in the race issue,” he said. I explained what I do and who invited me. I asked what they were interested in.

Nina: What do you mean ‘what I’m interested in?’ You’re the writer.

I almost got up to leave. I wasn’t in any mood to cope with this kind of thing. I have always hated formal interviews anyway. What had I come? I’ll never learn, I thought.

Nina: It makes no difference to me. I’m not the one who wanted the interview.

D: (Losing his cool fast) Well, you told me what you are not interested in. I’m asking you what is it you would like to talk to me about.

Nina: That’s up to you…Can I bum one of you cigarettes?

I gave her one. We lit up. There was another long pause. We were both resisting. 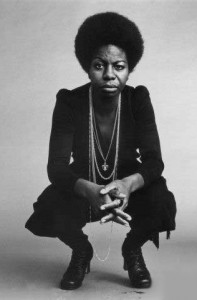 D: You must have a line of questioning that you’ve already planned…Oh, don’t you?

More silence. I sank further into my chair. I asked her what pop groups or singer she likes to listen to. Not much of a question, but better than nothing.

Nina: Which ones in particular, you mean? I don’t know. Well, in general, I like what’s happening in pop music. It’s taking on some standards—I’m glad to say—that it should have had years ago. I believe the time will come when the whole definition of pop music will change. It will get to the point where a song will not be a good song until it has a high level of creativity in writing and performance. In other words, in order to be popular, songs will have to meet these high standards.

There were a few interruptions here. The phone, a secretary walking through, etc. Miss Simone told me she had given a concert tour in Europe recently. We agreed about what a good city Amsterdam is. We both relaxed a little. I became aware of her stunning, natural beauty and the intelligence in her eyes.

Nina: And because of the better quality in pop music, I find that the gap between my audience and what I am trying to say is closing. I still have the old audience I had before, but it’s growing now. However, it is difficult to retain your standards with the pressure of trying to make money, which always has its rules…It’s hard to walk the tightrope of doing what you think is your best and making money at it. The pressure of show business is on all the time and show business is a fickle business. Whatever is popular now—that’s all that counts. I have to constantly re-identify myself to myself, reactivate my own standards, my own convictions about what I’m doing and why.

D: That’s why the Beatles are so amazing. They don’t have to grow or change, but they seem to have a need to…

Nina: The Beatles are lucky, very lucky. But what has happened to them has nothing to do with them, in a sense. They came along at the right time. Attention was focused on them. They’ve had the chance to grow in almost any direction they wanted. Very lucky. They are not exceptionally talented. Uh uh. They may be. But they are just starting to create. They have just discovered that they have talent, friend. Fate was good enough to give them time to think about their talent, to develop it as they please, without fighting everybody around them.

D: I was listening to some old Joao Gilberto records the other night, and I thought about how bossa nova came into the spotlight around the same time as rock. It was eclipsed. I think it could have been much bigger had the timing been different.

Nina: Could be. I have been using what might be called a rock beat for years and years. It doesn’t matter to me what is going on today because my music encompasses every kind of mood that exists in human beings. That’s my stick. I know 700 songs—just like that. So out of them, there is bound to be almost any kind of “style” you could imagine. You know Bobbie Gentry’s “Ode To Billie Joe”? I do a tune, “When I Was A Young Girl,” I’ve been doing it for years—same type of thing.

D: You talked about walking the tightrope between compromise and integrity. What if you didn’t have this limitation?

I’m sorry not to be able to tell you exactly what she would have done. I don’t think, however, she would mind my saying that, in general, it has to do with extended works.

D: Jazz has been moving more and more in that direction…What jazz musicians do you like?

Nina: As far as piano players are concerned, Oscar Peterson is my very favorite. I also like McCoy Tyner. I think that the big jazz stars, both now and in the past…how shall I say it? These guys are as great as Bach, Beethoven; all of them. People don’t know it yet. If jazz survives and is put on a pedestal as an art form, the same as classical music has been through the years, a hundred years from now the kids will know who they were, with that kind of respect. This may or may not happen. In the meantime, unfortunately, as they get older, some of them get bitter. Music is an art and art has its own rules. And one of them is that you must pay more attention to it than anything else in the world, if you are going to be true to yourself. And if you don’t do it—and you are an artist—it punishes you. It’s true! Like when I leave you…You’ll have to forgive me if I’m a little brash today. But I have a rehearsal this afternoon. That’s mostly on my mind. That music—it’s something else. It really gets you.

We talked about her group, and I told her how much I liked it, her piano playing, and the fact that her bass player was properly amplified. My pet peeve has long been the inaudibility of basses in jazz. (I noticed my hangover was gone.)

D: I think that is symbolic of what is wrong with jazz. There is a lack of simple planning, a…

Nina: I agree with that. That’s true, love, that part is true. It’s unfortunate. It is assumed, for instance, that pianos are never tuned in jazz clubs. It’s part of the sound. Half of the broken down sound—in the old days anyway—was the broken down conditions that the music was played in. Then when the music began to change, the musicians still didn’t give a damn because the owners didn’t give a damn. When you think about things as simple as cleaning a men’s room—the musicians really have nothing to do with that—but it affects them. And when you start screaming about having a decent mic, the guy looks at you as if you are crazy. He thinks you are egotistic because you want a simple thing to do your best. That’s the way it goes. By the time the musicians do get a decent place to play in, and the conditions they have been screaming for, by that time they seem not to care anymore. So it goes.

D: It’s different, though—better—in Europe. Why, do you suppose?

Nina: You know why. You know why…the people. We’re in trouble over here, bad trouble. And I mean a lot more than with jazz.

D: Have you ever thought about moving to Europe?

Nina: I think of it a lot. I’m just riding with the wind. You know, I was born here and nobody really wants to move from where their roots are. Whichever way it goes, though, I’ll go. In a way, the fact that we are in trouble is a good sign. We recognize it now, at least. In order to clean up all the crap. You can’t do that until you realize that—you—are—in—the—midst—of it. We got so much crap here. Wow! It tends to be obscured though. We bury it with intellectualism, with confusion. So much talk going on that it is hard to think clearly. And we hide, avoid the unpleasant things going on. I saw something yesterday. I was going to church on 54th and Lexington. There were some kids in the street playing football right on Lexington Ave. I’ll tell you what hit me. What amazed me was the order of things—the fact that we wear clothes, that an office has to look a certain way, the whole bit. It’s amazing how accustomed we have become to a certain order. And you become more aware of that order when you see something change it. Everybody turns around and stares. But why, really? Rules, orders. We have ordered things so long in a certain way, we are numb. Nobody dares question it. This is what is wrong, symbolically, with my country.

We has been at it for over an hour by this time. It was time to wind things up. “Where is the rehearsal?” I asked.

Nina: At my home.

D: You came all the way in from there to see me? Thanks. Wow. I’d better let you get back to music. No more public relations today.

Nina: It’s alright. I have to do it all the time. It’s funny about music…music is like…music is one of the ways by which you can know everything which is going on in the world. You can feel…through music…Whew…you can feel the vibrations of everybody in the world at any given moment. Through music you can become sad, joyful, loving, you can learn. You can learn mathematics, touch, pacing…Oh my God! Ooh…Wow…You can see colors through music. Anything! Anything human can be felt through music, which means that there is no limit to the creating that can be done with music. You can take the same phrase from any song and cut it up so many different ways—it’s infinite. It’s like God…you know?

Afterwards, despite the shoving, fumes, and noise of Fifth Avenue in the afternoon, I felt that interviewing people wasn’t so bad after all.