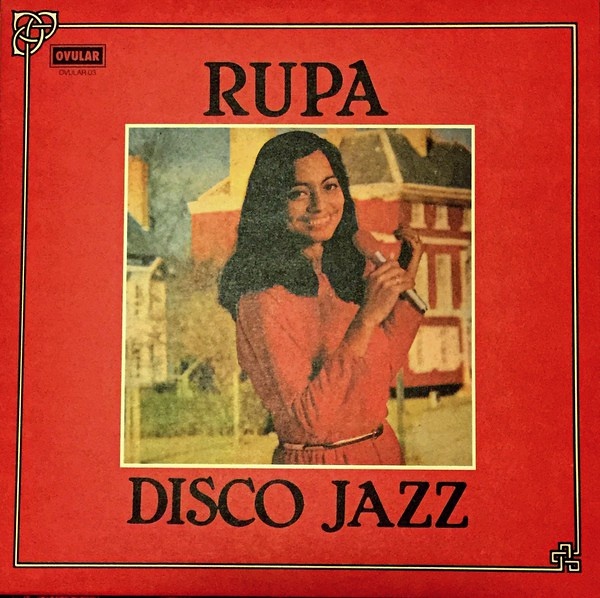 via Piccadilly: After adding a heaped teaspoon of spice to the Piccadilly Records pot with two volumes of “Early Pakistani Dance Music”, Ovular return to the shelves with a red hot reissue of THE Indian disco holy grail.

Engineered at Calgary’s Living Room Studios in 1982, “Disco Jazz” was the only release Rupa put out, working with a crack team of Canadian disco muscle and Indian studio talent to create the perfect fusion dish. East meets West, guitar meets sarod, soul meets funk and psych meets disco as Rupa and her crew groove their way through four far out moments of dance floor brilliance.

Opener “Moja Bhari Moja” locks us into a frankly irresistible bassline, before the wild guitar riffs, spectral synth lines and trippy sitar create a kaleidoscopic visionquest for our collective third eye. Rupa‘s echo drenched vocals arrive right on time to seal the deal and steal the show, securing the much coveted ‘cosmic disco killer’ title all records should aspire to. “East West Shuffle” does exactly what it says on the tin, fusing transcontinental tonalities into a smooth jazz funk simmer before “Aaj Shanibar” closes out the A-side with the kind of cinematic sunset disco all the Balearic heads go wild for. If it weren’t for the expert tabla and psychedelic sitar, you’d be forgiven for thinking this was one of those flamenco disco bombs you’d hear in a peak time Mison set.

Stretching itself suavely over the whole of the B-side, “Ayee Morshume” is the kind of cosmic disco journey only the most experienced trippers should attempt – a heads down, hands aloft groove-voyage through endless solos and enchanting vocals. Chances of finding an original copy are way beyond slim, and on the rare occasion they turn up on the second hand market you’re looking at the top end of three figures. It’s a special record, and you’re never gonna get a better chance to bag a copy – don’t sleep!