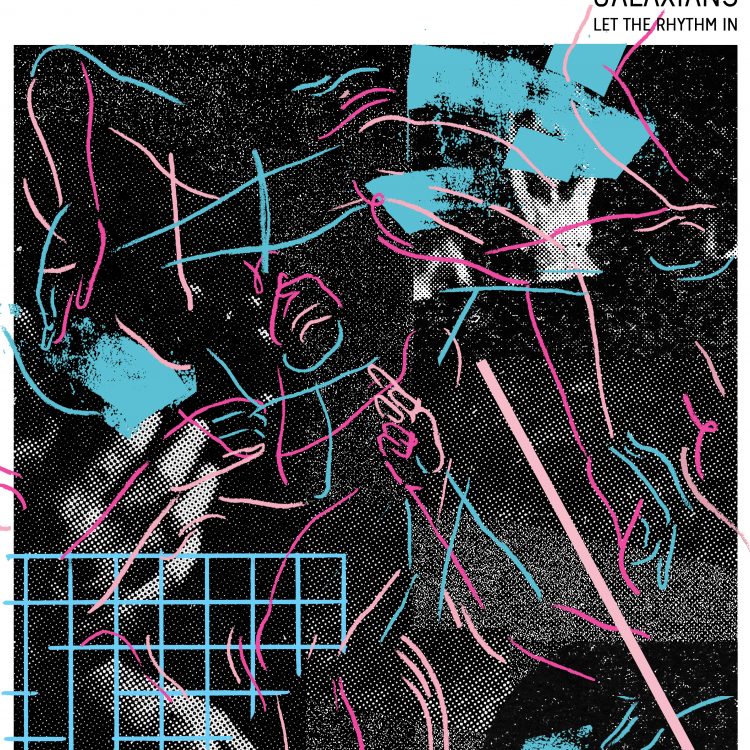 Album Premiere: Galaxians “Let The Rhythm In” (Dither Down Records)

Within the music of Galaxians – the trio of Emma Mason, Matt Woodward and Jed Skinner formed in 2012 – lies a powerfully hedonistic strain that does much to loop a thread through the party lineage of their hometown of Leeds.

Coupled with the first impressions of what the trio loosely term their “pre-digital dance music”, you might not raise an eyebrow to find out that their cues are taken in-part from classic disco and house labels such as Sleeping Bag or Chicago’s TRAX, nor that their early EPs found homes across the Atlantic on the similarly-minded Dither Down in Brooklyn, and Atlanta’s Rotating Souls Records.

However, it’s the beating pulse of Northern England club life, married with the thriving independence of much of the region’s best venues and spaces that forces its way through on the trio’s debut LP “Let The Rhythm In”. Recorded at Leeds’ Ghost Town studios with Ross Halden, the nine tracks come steeped in the Yorkshire city’s less-trumpeted but enduring house heritage – with inspiration drawn from the all-day parties of the late ’70s and early ’80s, the disco that emerged from the fading Northern Soul movement of the early ’80s and the resonant acid house era that boomed across both sides of the Pennines. The heat and dusty decay of 808s pushed to their limit, the sunshine smile of piano hooks and the squelch and splatter of analogue synth punctuate the crackle and fizz of Let The Rhythm In’s eight tracks.

Previous 12”s Galaxians and Personal Disco Component captured much of the lo-fi scuzziness that Galaxians have long-surrounded themselves with – as likely to pop up playing more punk-associated DIY spots like their hometown’s Wharf Chambers as they are in front of the heads at Beat-Herd-er or late-night with the likes of Horse Meat Disco and Auntie Flo. That raw playfulness in their sound still bubbles beneath the surface, but there’s a whole new fluidity to proceedings, a seamless flow between the rattle and strut of their analogue funk.

If Skinner and Woodward have deftly refined things however, then what’s altered the soundscape unequivocally is the addition of long-time friend and vocalist Emma Mason. Though not a constant, her presence is felt immediately on the opening track ‘Street Level’, a powerful, soulful vocal that commands the track in a way that resonates far beyond the relatively brief time she actually appears. On ‘Subway Dancers’, meanwhile, the heat and hustle of its bassy propulsion melts beneath the shimmer and sway of the melody.

Sometimes the instrumentation is allowed to run wild by itself, as on Working Weekend’s snaking, delirious eight minutes, but it’s when they unite as a trio and throw their net wide that Galaxians truly show the extent of their arsenal to direct torsos and trigger feet – as on the cosmic ‘Worldwide Experience’, that takes a further turn left and pulls in Afrobeat and Motown to an already irresistibly rich melting pot.

And that – really – is what Galaxians are all about. The frameworks may be recognizable, the elements crisp with a familiarity, but it’s from that warmth of recollection that the group seek to twist, subvert and extend these norms. Well that, and to make people dance – something they’re set to achieve in spades.

“Let The Rhythm In” releases October 20, 2017 on Dither Down Records

For info on the Galaxians’ tour dates click here