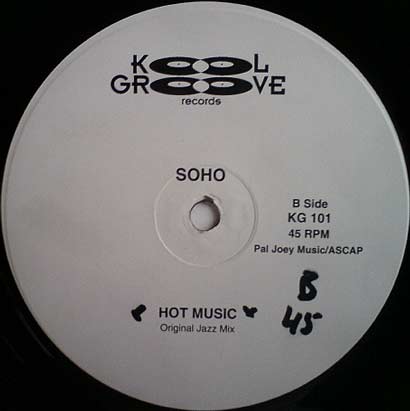 “Way back in 1994, when I was first cutting my teeth in the world of spinning house music, I picked up an LP from one of my favourite record stores (Inbeat R.I.P. ) called Hot Music by an artist named Pal Joey. The main reason I purchased this album (which now trades hands for over $150) was for the track called ‘Hot Music (Jazz)’. I had heard this track at many of the early warehouse parties / raves / clubs I had been going to. It had initially been release in 1990 under the elusive artist name Soho and instantly became an underground classic. Pal Joey and Soho are alter egos for Joseph Longo III who has been deeply involved in house music since he started his own label, Loop D’Loop, in 1990. Longo has also produced and remixed for the likes of Boogie Down Productions, Sade and The Orb.

Andy Williams and myself have had many discussions over the idea of what dancefloor jazz is since we started the Jazz Amnesty Sound System. ‘Hot Music (Jazz)’ was one of the first tracks I pulled out for him and said “does this count as dancefloor jazz?”. At which he responded that it most certainly does. Since then it has often sneaked out in our more bouncy J.A.S.S. party sets; and well over 20 years later this track still fills the dancefloor every time. Now that’s what I call ‘Hot Music’.”