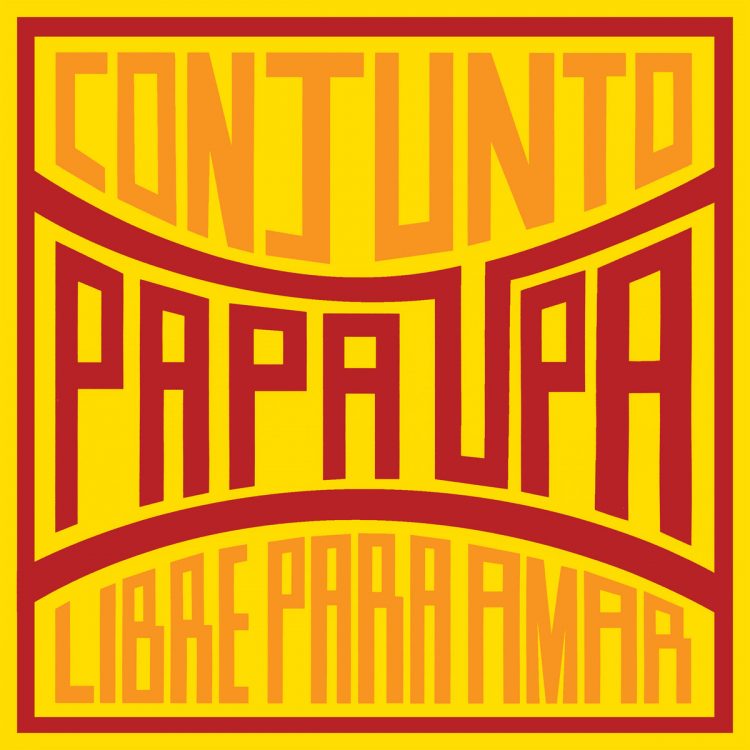 A slice of tropical psychedelia dedicated to “all the metalheads who are living in the closet”. The song is taken from their brand new debut album, “Libre Para Amar”, released this week via New York’s Names You Can Trust.

Conjunto Papa Upa is the name of a grinding, pulsating, fire-starting Amsterdam-based psychedelic dance band, fronted by “The Hardest Working Man in Tropical Music” Alex Figueira (Vintage Voudou, Fumaça Preta, Music With Soul, Barracão Sound), starting as a purely experimental solo studio project with the aim to face his identity crisis as an immigrant trying to cope with the collapse of his native Venezuela and the increasing need to fight back with something positive, using the weapons he knew best.

The name “Papa Upa” refers to both a tune by the Cuban music legend and Son innovator Arsenio Rodríguez and a popular brand of chewing gum that kids used to love in early 90’s Venezuela for its clearly superior bubble-blowing capabilities.

Incorporating an extensive amount of African, Afro-Latin and Caribbean rhythms, this band sees Alex combining his well known record digging musical curiosity with the pursuit of his musical heritage, the sounds of his Caracas youth blaring from car radios, street parties, supermarkets, buses, his neighbour’s yard; the omnipresence of music in the poorer neighbourhoods of a huge Latin metropolis where the luxury of aural privacy is an unknown concept.

Conjunto Papa Upa does have some of the signature colourful campiness that other popular bands coming out of the “Amsterdam Scene” have (such as Mauskovic Dance Band and Altin Gün). However as Alex says, “groove is on top of the hierarchy and we like to serve it with enough substance”. There are no overblown psychedelic breakdowns, extended guitar solos or emotional sonatas; the band is all about rhythm, finding new ways to make legs, asses and arms move in a process that is investigative and musically meticulous. “One thing I demand from my musicians, is the necessity to remain out of their comfort zone. It is our duty to keep exploring. To dig deeper for the origins of the rhythms and bring those roots into uncharted territory, where they can keep evolving, giving birth to new musical frontiers. There’s so much great music… one can spend an entire life exploring”. This is the very process that has granted Papa Upa plenty of elements from countries like Angola or Brazil in its sound. Two musical powerhouses where the amount of dance related genres is simply immense.

A constant theme of Alex’s own bands and releases on his ‘Music With Soul’ label, is that they sound exactly like the record you were hoping to discover on your next record diggin’ excursion, with different combinations of the right ingredients: funky, raw, genuine and crazy. The same way a cook needs to make a recipe countless times, get people to try it to then get back to the kitchen and do it all over again and again, getting Conjunto Papa Upa to reach this authenticity has been an equally challenging task. As Alex explains “It is not so hard to find musicians who can play Latin or African music. What’s hard is to get people who can play the same 4 notes tirelessly for 5 minutes to suddenly jump to a sort of freak-out free-jazz break to then come back to the same 4 notes again, because sometimes that’s what the song demands”. After countless changes in the line-up, a cohesive team of highly experienced musicians has been put together.

Coming from the vivid Amsterdam experimental avant-garde scene, where crazy gains a much wider meaning than most would dare to believe, are Miguel Petruccelli (Uruguay) on guitar and Jarno van Es (Holland) on organ and synths joined on the rhythm section by two extensively experienced and highly in-demand players: Randy Winterdal (Curaçao) on bass with a curriculum far too long to fit here and Alex’s fellow Venezuelan native and percussion teacher, Gerardo Rosales, a master with an equally impressive curriculum who was actively recording on many hit records in Venezuela in the 80s and 90s, provide the perfect accompaniment within the band, a driving force that looks like they’re barely raising a sweat onstage, while providing all the infectious rhythms to carry the band alive into the stratosphere.

MY FAVORITE THINGS #20 - Hosted by Psycut