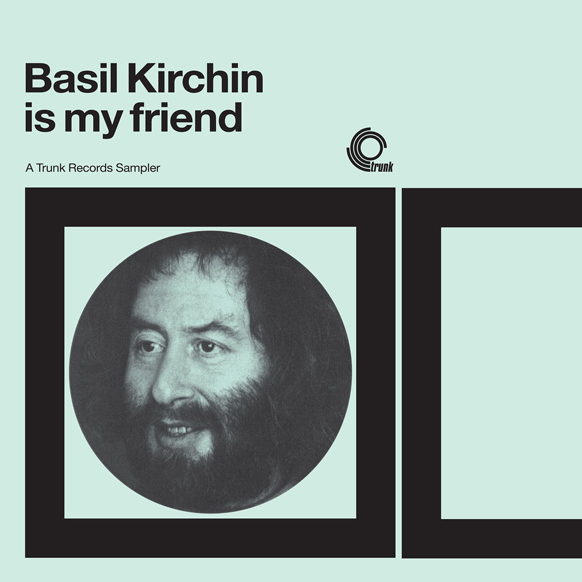 via Johnny Trunk: This new compilation of old Kirchin material comes as a result of the free CD I produced for Hull 2017 City Of Culture.

There was a Basil Kirchin “weekender” this February, three days of talks, music and events based on the life, music, and world of Basil Kirchin.

As the person who resurrected and oversees the music of this great British composer I though the weekend was heading for a fall. Very few people have come across Basil, few people have his records (and those who do know his music can be difficult), so how on earth would a weekend of Basil events draw any kind of crowd? I honestly thought it would be just me and the organising team sitting in empty rooms. I headed to Hull in February full of mixed emotions but determined to enjoy everything about the trip.

When I got there I found Hull a joyous place full of charm, wit and promising regeneration. And, to my surprise, each new Kirchin event was busier than the last – there were Kirchin friends, musical collaborators, true fans – with people actually being turned away from a new Kirchin documentary screening because the town hall had run out of room and chairs. The climax of the event was a packed two hour concert, with the BBC Concert Orchestra replaying cues from Charcoal Sketches and Quantum. I found myself in bits at this point, looking at the projected photo of Basil knowing he’d be thrilled, embarrassed, charmed, excited and totally overwhelmed by the whole event. Everyone could feel the love all weekend for Basil and his amazing music.

The CD went down very well too, so I thought it made sense to get a vinyl Kirchin sampler out into the world. So what exactly do we have here? Well this is similar to the free CD for Hull with both released and unreleased material, but this time instead of knocking it into shape myself, I gave long term Trunk collaborator Jon Brooks free reign to do what he wanted. I sent him all the cues I’d used for the original and added some more, including some music from a tape called “Xerox” from the Kirchin reel to reel archive. There are also tests and musical effects from The Shuttered Room, field recordings, a Charcoal Sketch, some Quantum – basically a mixture of known and unknown material. But the older released music is now very hard to find on vinyl, so this sampler will please everyone – fans both old and new. Worth mentioning as a small aside is that fact that the theme from Primitive London has the same 24 note melody as Taxi Driver, a film made a decade later. I never mentioned this on the first release of the music, simply because I hadn’t spotted it. It was my wife who noticed, about 3 months after the release when we were listing to it in the car. There has been some talk around a mid 1970s Kirchin / Herrmann head to head, but we can only speculate.

As well as music and field recordings here there are three excerpts from a long interview I recorded with Basil just before he died. He’d asked me to go to Hull and record him talking. There were “things” he wanted to mention and explain about his life and work. I will shortly post the entire recording on line and there are some fascinating statements by a man who travelled his very own musical course.

When it came to the title of the sampler, I was going to use the same as the Hull CD, but “Mind On The Run” was the name of the event, the name of the new documentary and also one of his library albums for de Wolfe and so this would / could lead to more confusion. I then remembered that I’d made some tee shirts back in 2003 with a photo of Basil on the front with the line “Basil Kirchin Is My Friend” written below. I thought this statement was still relevant, you’ll even hear him call me his “mind buddy” at the beginning of this album as this was a term he used for all people he worked well with. And even though he’s long gone (Basil died in 2005), he’s still very much my musical friend. And now, thanks to the Hull weekender, Basil has even more friends – he’s better known, less obscure and there is a new light shining on his work; it’s a light that also illuminates people’s lives once they meet with his incredible and often very beautiful musical world.

There is more Kirchin music and sound on the way, but in the meantime I would like to thank and dedicate this album to the following: Basil and Esther Kirchin, Clive Leslie, Evan Parker, Matt Stephenson, Alan Jones, Keith Herd, Ian Firth, Jack Nathan, John Coleman and all the groovy people of Hull. I’d also like to thank Serious for making the Kirchin Weekender happen. And Basil, if you are looking down, I think you’re still “roaring”.