You know what time it is!

I think it’s safe for us to say that Far Out Records has been on a heavy winning streak these past few weeks, so we definitely had to pick a couple from their latest catalogue additions. There’s also some Belearic-tinged Funk, some stoney throwback Soul, some killer new-school Jazz, among much much more. Let’s get down to business!

Even though Victor Assis Brasil lived only thirty-five years (1945 – 1981) on this planet, he was still able to become one of Brazil’s top saxophonists of his era after first picking up the instrument at age fourteen. Recorded in 1970 originally for Quartin Records, this album is a Brazilian Jazz masterpiece, and major props go to Far Out for bringing this to the public’s attention. Jazz heads will not be disappointed!
Purchase Album

Gulf Point’s expanding roster delivers a twist with the introduction of Vienna-based Alexey Lanvin. While an ominous inner-city funk adorns all songs, it’s ‘definitely Miami’ when the upbeat items arrive, suggesting his High Street antics are merely a front for his Downtown demeanour. Perfect to listen to on your yacht while living la dolce vita, drifting towards the horizon while the sunset paints the sky a dusty rose.
-Selected by Walla P
Purchase EP

The Rome based producer Adam Bourke has been steadily releasing music for the better part of a decade (for reference check out his brilliant Prelude EP from 2013) and here he teams up with his countryman Raiders of the Lost Arp on the always excellent Far Out Recordings with a housey jazz fusion workout simply titled RAW. Need I mention that on the flipside you get the legend that is Ron Trent on remix duties?
-Selected by Spacewalker
Purchase 12″

We are witnessing a resurgence of UK jazz in the last couple of years with the likes of Ezra Collective, Shabaka Hutchings, Kamaal Williams leading the way (be sure to check out the forthcoming Brownswood compilation “We Out Here” focusing on the new school of UK jazz). One that definitely deserves more attention is the very talented pianist Ashley Henry who’s back with an EP after a brilliant session album for Jazz Re:freshed (Ashley’s 5ive), entitled “Easter”. Contemporary, soulful jazz vibes with a hip hop (rendition of “The World is Yours”) and even broken beat (“Moving Forward”) edge, one that should definitely appeal to the Glasper fans out there. Don’t sleep on this one, the EP is well worth seeking out (on wax)…
-Selected by Spacewalker
Purchase EP

On their début album “Phase”, Mildlife combines Jazz and Post-Disco along with kaleidoscopic atmospherics to form a modern reading on krautrock and its progressive fusion configurations. The album captures the Melbourne-based quartet being patient in the right moments and stretching the central point of a chart. Less adventurous artists would get antsy, stiff, or run and turn vanilla in these scenarios, but Mildlife shows their stones and thrives.
-Selected by Channel Subtext
Preorder Album

We Out Here (Brownswood Recordings)

“A primer on London’s bright-burning young jazz scene, this new compilation brings together a collection of some of its sharpest talents. A set of nine newly-recorded tracks, We Out Here captures a moment where genre markers matter less than raw, focused energy. Surveying the album’s running order, it could easily serve as a name-checking exercise for some of London’s most-tipped and hardworking bands of the past couple of years. Recorded across three long, fruitful days in a North West London studio, the results speak for themselves: they’re a window into the wide-eyed future of London’s musical underground.”

“The sound of record labels like Strata East, Tribe and Black Jazz has been a massive influence on Menagerie. To me that sound is timeless, exciting and just as vibrant as a musical format in 2018 – and the proof is that we’re hearing more and more young musicians embracing it”

Meet Magic In Threes – one of Nashville’s best kept secrets when it comes to stoney Soul grooves that sound straight from the 1970s. It would come at no surprise to find their latest 7-inch tucked away in a 45 box simply marked “Soul” in sharpie at an unassuming record store, hidden amongst a goldmine of other library gems and the likes. The thing that would catch your attention however would be the date of its release – 2018. This is where Magic In Threes mark their territory.
-Selected by Mike Jones
Purchase 7″

Volcov “On My Heart” (Neroli Records)

“2017 remixes of Volcov’s [this time under his classic Isoul8 moniker] song ‘On My Heart’, featuring the great Paul Randolph on vocals. The NDATL boss delivers three versions that combine jazziness and dancefloor attitude. Also included here the in-demand jam ‘Speak Your Word’ that features Osunlade on keys and a remix from Kai Alice.”
Purchase 12″

The RAW HOUSE SUPREME Show - #199 Hosted by The RawSoul 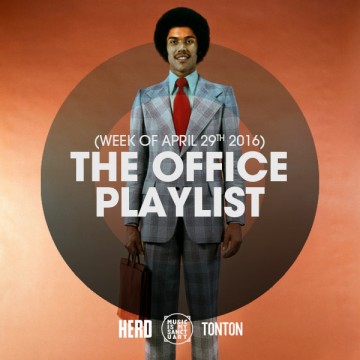