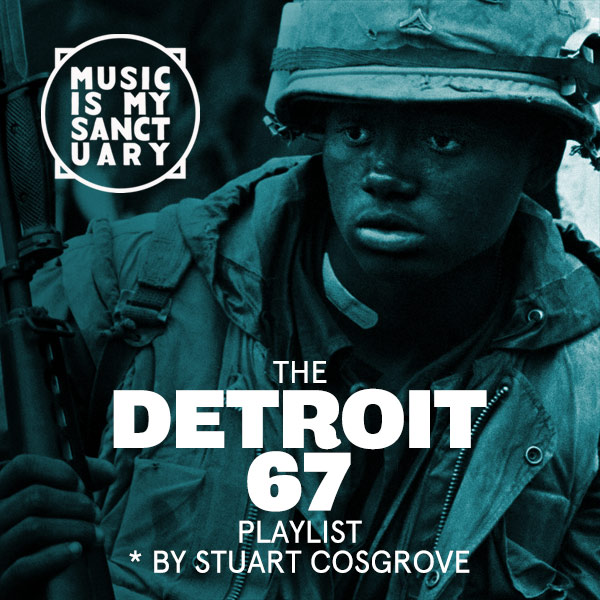 A couple days ago we ordered a book titled “Detroit ’67” by journalist, broadcaster who was involved with BBC, NME, The Face to name a few.

We are only a few pages into it but so far we can’t put it down, a fascinating chronicle of Soul Music, Street Crime and Social Rebellion during the pivotal year of 1967. We strongly recommend you look into buying it!

There is something we could share right away. The author wrote down a playlist to serve as a musical backdrop to his book. Some great nuggets in there!

Detroit 67 is the story of Detroit in the year that changed everything. Twelve monthly chapters take you on a turbulent year long journey through the drama and chaos that ripped through the city in 1967. Over a dramatic 12-month period, the Motor City was torn apart by personal, political and inter-racial disputes. It is the story of Motown, the breakup of The Supremes and damaging disputes at the heart of the most successful African-American music label ever.

Set against a backdrop of urban riots, escalating war in Vietnam and police corruption, the book weaves its way through a year when soul music came of age, and the underground counterculture flourished. LSD arrived in the city with hallucinogenic power and local guitar-band MC5 -self-styled “holy barbarians” of rock went to war with mainstream America. A summer of street-level rebellion turned Detroit into one of the most notorious cities on earth, known for its unique creativity, its unpredictability and self-lacerating crime rates.

1967 ended in social meltdown, personal bitterness and intense legal warfare as the complex threads that held Detroit together finally unraveled. Detroit 67 is the story of the year that changed everything.

@Detroit67book: An unknown Detroit vocalist pays loving tribute to a city on fire on a local indie label Palmer.

@Detroit67book: Sultry song that featured in Kim Weston’s set as she bid farewell to the progressive ladies of Detroit.

@Detroit67book: Rough-house R&B which was too harsh for Motown’s crossover quality control

@Detroit67book: Shot dead by a Detroit police office officer but one of the soul’s great releases survived.

@Detroit67book: The song that launched the workers’ slogan “Detroit I Do Mind Dying”

@Detroit67book: Brilliant soul rendition of the Great Migration. The singer moves from Mobile, Alabama to the rain-soaked streets of inner-city Detroit.

@Detroit67book: Ruffin drives past his old haunts including the apartment he shared with Tammi Terell.

LEXIS - Breakfast Mix for On Déjeune

CLOSED: Win a Vinyl copy of the "MIAMI SOUND - by Henry Stone" Compilation (Athens of the North Records)