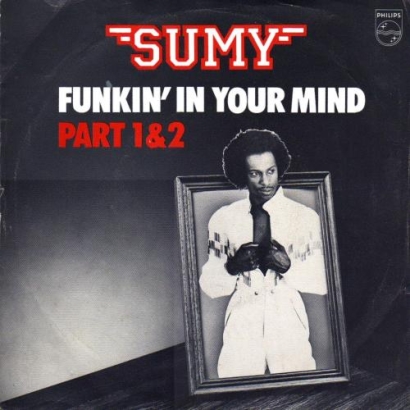 Sumy’s “Funkin In Your Mind” is a great funky throw back tune for all you smooth 80’s boogie lovers. And if you can’t really get on board with this beat, you most certainly can’t argue with the album cover – absolute gold! To consider this a forgotten treasure would be an understatement, as this track faded in 80’s obscurity. There isn’t an extensive amount of information about Sumy out there, so boogie one hit wonder is definitely apt.

Sumy, real name Kenneth Sumter, was born in Paramaribo, Surinam (South America) and in 1979 he began his music career in Amsterdam. He founded his own record label called Galaxy Europe Music and his productions released after this hit are really not worth mentioning beyond their funny titles like “Where Were You Last Night (Sexy Lady)?” and “Bitch, We Danced A Lot!” but the beats themselves are better off staying lost.

Funkin’ In Your Mind was released in 1982 on Philips, and was produced by Joel David and it includes all the basics you need for Funk Boogie goodness. It’s a slow jam with a dope funky guitar and bass line, space boogie synth, and female vocals mixed with 80’s style male rapping. It even has possibly the cheesiest voice over about the rapidly spreading disease known as ‘Mind Funk’ plaguing society, warning people to retreat to the anti-funk chambers. It’s pure cheese overload and I hope that one day someone will sample this solid beat and create something epic.

Bonus:
While I was digging around, I found his 1979 release, Going Insane – it’s more Funk if you fancy.