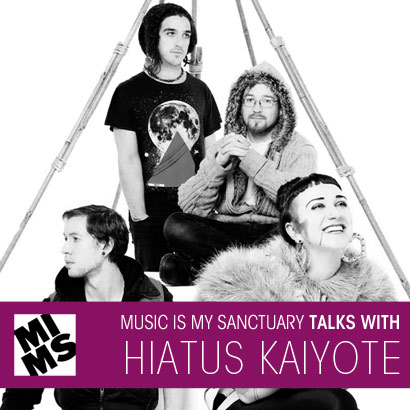 I’m blessed to say that most of my friends are super creative souls, so most of our hangouts involve some sort of artistic stimulation or creation rather than mundane chilling sessions. This particular evening my boy was having a jam session at his place when he decided to enlighten us on some Hiatus Kaiyote. You can be sure that a band is worth listening to if a room full of musicians and music critics are literally left speechless after hearing just one track. That next morning I went to cop myself their album cause it was the type of treasure I needed to be able to dissect over and over to try and understand its beautiful complexity. Right when I was getting down to putting the album on I got a message from a friend telling me that the universe just one up’d our experience cause Hiatus Kaiyote, who are all the way from Melbourne Australia might I add, were gonna be performing in Montreal in 3 weeks. You gotta love when the stars just align like that.

So August 8th I made my way to their absolutely insane performance. Actually it felt more like a beautiful escape. I got there late cause of previous engagements but I was immediately swallowed into their world when I got there and it honestly took me a while to get down from the high after the show was done. I didn’t think my words could do their show justice so I opted for an interview with their lead singer, Nai Palm and bassist Paul Bender who left me loads of conversational gems to share with you all. Enjoy.

MF Gold for Music Is My Sanctuary (MF)  – Ok so how did the band form? Were you all active members of the Melbourne music scene or did it form from another route?

Paul Bender (PB) – Well there was a lot of weird sort of things that linked up. Perrin (Multi-instrumentalist) and Simon (keyboardist) were living together in this awesome house that’s kinda been a musician’s house for the past 8 years. Then I met Nai just around the time that she met Perrin at a café, she was playing a song and he joined along playing some percussion on the furniture and stuff. I also knew Simon from a ways back and then we just all ended up rehearsing together in this house.

MF – Are you guys all from different music backgrounds? Where is this sound coming from?

PB – Well me and Simon studied music doing pretty much Jazz, while Nai and Perrin came from their own experience and experimentation.

MF – Nice, ok so can you tell me about your new album Tawk Tomahawk, what was the process? Had you planned to make an album when you started?

Nai Palm (NP) – Well it was the natural evolution of being in a band. It’s one thing to be writing together, but recording together is a whole other world of exploration so I guess it was the natural next step for us. Also the house where all the guys were living made it possible. It was our first rehearsal spot but it’s also our recording area.

PB – Ya, it sort of became a recording space. At first it was just a random room then it became a rehearsal jam room then it became the studio then eventually the whole lounge room got taken over and that became the control room and the other room was the live room and well… the kitchen became our lounge room (laughs). But ya it’s the whole priority of doing more stuff with music.

MF – Were you guys performing around town prior to dropping the album? Cause from seeing you guys live I see that you have a very strong live dynamic and all your pieces flow together seamlessly almost as if it was a jam session rather than separate distinct pieces of an album.

NP – Well actually there’s a really strict arrangement to our live show, but we go so deep into the bits that connect each section that it seems seamless. I mean there are pockets for improvisation within the song but still with very strong arrangements. For this particular record, a lot of the songs I had pre-written and we, as a band, worked on arranging them. I mean the band originally came together from songs I’d written and then it became about how each member could be creatively involved in making them blossom. So this record not only documents our beginnings but also our evolution from that to writing and creating together from scratch, which can be seen in our interludes.

PB – Ya, I mean the first time I heard Nai’s pieces and knew we’d be a band; I had a bigger vision so when we went into recording it got really deep. There are a lot of layers and like you saw, we really wanted to make it a great live experience. We wanted it to come out as one piece you know, something like a journey or a symphony. 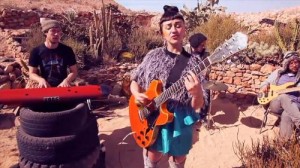 MF – Definitely. Aside from the structure what’s the energy you guys are trying to give out with your album and live show?

NP – To allow people to enhance their imaginations. I mean music and art are amazing for that. Life can be intense and you become constipated in your soul and our job as musicians is to express our imagination & creativity and allow it to be open and adaptable enough for people to explore their own and hopefully have some sort of magical experience.

PB – We’re all inspired by artists who push things to a place where it had never really been before and in doing that they create an experience that unlocks different things in you. I mean there’s a lot of good music that is familiar and similar that grounds you and you can count on it to be the same but sometimes you want to push into something you’ve never known before.

NP – For example, the way that people dance and the recognizable time signature. We get so stuck in that and like knowing ‘this is how I dance, I know how to move my body in this situation’ and you kind of condition yourself so it can be really liberating when you find something that unlocks you from that.

PB – It’s really inspiring for us to know that we’re trying to push ourselves to make it unique and the number of people that respond to that has been like crazy! We could have never anticipated it. Meanwhile a huge part of the music industry is focused on ‘people are idiots, you can constantly shovel the same shit into their ear and they’ll love it’. We’re really glad and inspired that people are feeling our crazy stuff.

MF – For sure! It’s such a breath of fresh air. So you guys having touring for a couple of weeks now, has the tour affected how you go on from show to show?

NP – Well we don’t really have time (laughs). I mean we don’t have rehearsals during the tour so all the stuff we worked on as far as compositionally is pre-prepared but we’ll explore ideas while we’re playing.

PB – Ya but I mean we never really know what it’s gonna be like until we get to the venue anyways. Sometimes I feel like I pay better or give more if something about the show is a little fucked

PB – You know if the crowd is a little ‘meh’ or the sound is really shitty and since there’s nothing you can do about it you kinda let loose and have apes of fun and go crazy with it.

NP – I’d say touring definitely has strengthen our exploration and playfulness with each other and then when we get home as a result of that, we’ll kinda ferment some of the ideas that came about.

MF – Ok so I absolutely hate when journalist ask artists to describe their ‘sound’ but I have to bring it up because your t-shirts have this slogan which is the most amazing response to that question. Can you tell the people what it is?

NP – Ya, we had fun with that one. We had a few other ones too, what was the one we had… love something?

MF – I think it’s great that you guys don’t limit yourselves to these constricting sound labels that often filter the audience.

PB – Ya, well I think we’re all experienced enough in genres to realize that there is so much value in each of them, with their distinct psyches and souls so we don’t wanna miss out on one.

NP – There’s so much emotional eclecticism within a person, honestly humans are emotionally schizophrenic so if you can tap into all those compartments then you’re really giving the full experience.

MF – hahaha amazing. Well it was an absolute pleasure to meet you guys and I love what you’re putting out there, it’s definitely been unlocking some of my mental padlocks and I’m loving the sensation of creative freedom following through me. Can you tell us where to keep up with your work?

MF- True that. Thank you so much guys and come back to Montreal soon. There are a lot of people who still need to experience you.

Future Classic: Chloe Martini "About Me"