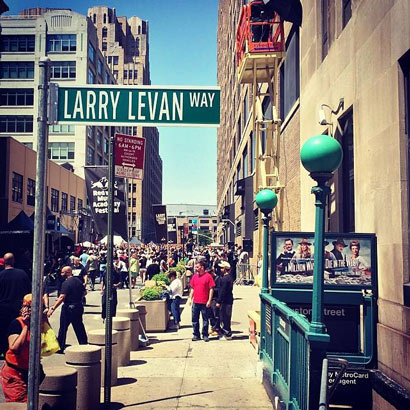 About a month ago I was visiting New York City for a mini-vacation to catch up with some friends, do some record digging and play some gigs. My first night in Brooklyn I was kicking it with my man, DJ Concerned, who informed me that my last full day in town happened to be the Red Bull Music Academy Larry Levan Street Party. I’m never one to wish away time, but the level of excitement and anticipation for Sunday, to say the least, was more than overbearing.

We showed up that hot, sunny Sunday afternoon in Manahattan with a jam packed party already in full swing. The inertia of this party was carried by every walk off life: black, white, latino, asian, gay, straight, young and old.

Seeing Paradise Garage ex pats singing along to every classic, and continuously dancing in the blistering heat, brought an enormous smile across my sunburnt face. Moms, who had once been late night party goers, dancing vigorously with their pre-teen and teenage kids to Sylvester’s “You Make Me Feel(Might Real)” is probably the best way for me to sum up the kind of vibe that had been emanating throughout the day.

I left that day feeling like I had finally experienced(to some extent) what it would have been like to be in attendance at Paradise Garage with Larry Levan behind the the turntables. On my flight back to Vancouver, I decided it was time to revisit an old staple/classic in my book collection: Bill Brewster’s “Last Night a DJ Saved My Life”.

One of my favourite eras that Bill Brewster documents is the whole Northern Soul craze that took off in the UK in the late 60’s. He excelled at going into detail about how the DJ’s were highly competitive with scouring the record stores all over England for the rarest soul cuts from the United States, how some went the extra mile to cut their own dub plates of rare tracks, or even travelling to the States in search of the next killer soul cut to ignite the dance floor at their weekly residency.

Whether it was during the Paradise Garage era, or the the numerous club scenes within the Northern Soul scene, music becomes quite synonymous with art & fashion; this fashion web series that was commissioned by Fred Perry, and curated and produced by Don Letts, goes to great lengths to showcase the fashion, the music, the dance moves, the venues, the mixing of cultures, as well as the acute differences between the northern and southern soul crowd.

Many would argue that the UK Northern Soul Scene in the late 60’s/early 70’s was the definitive moment that laid the foundation for club and dance culture, pushing it forward into the late 70’s and early 80’s, to the current incarnation of the dance music scene: