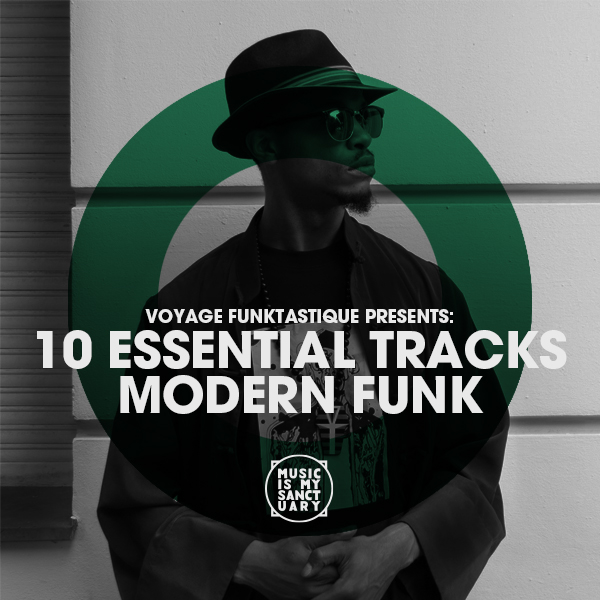 Last week, we celebrated the 100th episode of Voyage Funktastique, and I wanted to do a 2 hours tribute to some of the most influential Modern funk songs that solidified the show’s identity. The 99 previous shows always featured new tracks every week (nearly 2000 different ones – from the 80’s Boogie era to the Modern/Future Funk genre), and I wanted to do something different for this centennial mark. Without further ado, here’s my list of my “Top 10 Most Memorable/Influential” jams, in no particular order.

I remember when this banger came out, I was on the train headed to NYC with Dr.MaD, and we were both tripping out to this jam. Slow-tempo G-Funk/Popping anthem to its best. Temu’s production seems so simple, but yet, it’s quite complexed and exhaustive. The track got mad love on the internet (Kaytranada reposted it on Soundcloud). It’s no secret that Temu is one of my favourite producers, but he’s also one of the best performer in the game; I consider him as the “next coming” of Roger Troutman.

This United Kingdom multi-instrumentalist came out with a “Bang” when his first official project, “The Cove”, was released on Omega Supreme Records in early 2015. It sold out pretty quickly (I ordered 3 copies and a test press) just to show you how I was highly anticipating this instrumental EP. “Starting Again” defines the musical spectrum that Sven’s like to create; smooth-soothing synths with impeccable drum-programming.

This is the “ANTHEM” for the Modern Funk soundscape. This 45′ never leaves my bag, it’s just that good. ZFF’ enigmatic character and silky voice combined with XL’s production is just so on-point. I kinda regret I didn’t get some extra copies. If I’m not mistaken, this record was not supposed to see the light in the 1st place, but aren’t we all glad it did.

I discovered Buscrates through his Pittsburgh group, East Liberty Quarters, a few years ago. He’s probably the artist that’s been featured the most on the show. From his spacey boom-bap crunchy sound to his moog-bassed out boogie funk signature production, Bus is considered to be a reference in Modern Funk by his peers. His release via Omega Supreme Records, “The Spectrum”, is a masterpiece, and I could have pick any song of the album, but “Natural Force” is the JAM. He’s my contemporary “Kashif”, if that makes any sense. It was an honour to host him at the Voyage Funktastique night here in Montreal back in May. Get on the Bus (insert General Caine’s track).

Brian Ellis’ been making quite a name in the last years, being considered as one of the most productive and diverse producer in the game. “Love Is” is another 45 that never leaves my bag; it’s a mean dance floor heater featuring the legendary Egyptian Lover. The 2 have been touring together and also working on the new Egyptian Lover’s new album. Voltaire Records really struck a big one with the release of this track, and it sold out really quickly.

Now, I must admit that I could’ve pick any songs from the Cosmic Chronic catalog, because everything they put out turns out to be straight fire. “Charlene” is the perfect “infectious/contagious” jam that you play when you want your party to take a sexy turnaround. As soon as the audience hears the break, you know it’s about to get dirty on the dance floor. All the girls wish they were named “Charlene”. Another quality release from PPU.

Tension, also know as Hidden Groove, is one of the best kept secret in the Modern Funk community. I’ve played his tracks so many times, and people would always ask me what it was. His track “Your Sunshine” is his epitome of his production, and it was pressed earlier this year on Wet Play. The perfect summer ballad, great arrangements and synths, and dope vocals. In the 100th episode, I could have played all of his joints, but I settled for Heatin’ Up (https://soundcloud.com/hiddengroove/hidden-groove-heatinup), which also needs to be mention into this list. “I Feel The Heat” (check him out : https://soundcloud.com/hiddengroove)

First Touch – Sure Feels Good To Me

First Touch, a duo hailing from Manheim, Germany, have their own distinct sound, meshing that good old boogie-feel-good vibe with a hint of modern flavours; they’re the ultimate package…even my mom listens to them. Their production is definitely dance-floor orientated, and Sure Feels Good To Me is a perfect example; horns, strings, basslines, synths, drums, vocals, all seasoned to perfection to create a growing energy inside your body and soul.

Released on Cherries Reocrds, this jam is the perfect “feel good” anthem, dance-floor mature modern-boogie funk track; intoxicating bassline, contagious rhythm, and the vocals are definitely on point. You want to sing this to your crush and let her know that she’s “Right On Time”.

This Montreal prodigy is well known for his eclectic production skills. From Piu-Piu to Future Funk, KenLo seems to be always in another galaxy and ahead of his time. “Facteur Humidex” is a flip/edit of Marcus Miller “Be My Love” and “remélangé” à la sauce KenLo. He blessed the Voyage Funktastique Vol.1 with “Woogie On” and he’s also a member of Alaclair Ensemble. He’s also known for his “Colours” series, where every album name has a different colour, and a special vibe attached to each one.