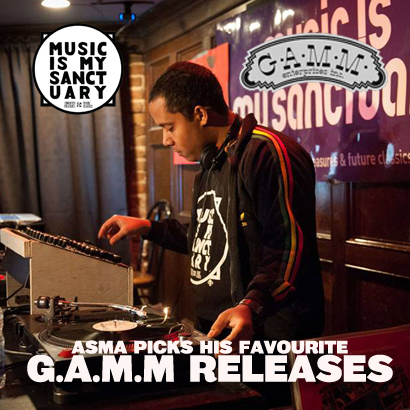 For me the discovery of the GAMM label came as a total shock and was frankly overwhelming. I was not that invested in the electronic scene early on as a DJ, but the tracks highlighted here are what made this amazing label’s strength: a variety of styles and influences that could be played in any set and were sure to get a head turning reaction.

Most of the tracks on the list were tracked down by me hearing it in a set and asking the DJ “what is that crazy song?” Whether it be hip-hop, reggae, brazilian, salsa,disco-funk edits or original production, not only is the seal of quality guaranteed with GAMM, but the crowd reaction as well. Try listening to any of these tunes and not have them stuck in your head or be itching to fit them into your next set/mixtape.

This was the first GAMM release that caught my attention and it blew me away. First of all, it is an incredible 2 sider. The Willie Hutch Brothers edit is sublime because it highlights the strongest parts of the original and the supplemental drums are perfectly layered subtle yet banging ; an undeniable dancefloor scorcher that takes the whole crowd on a ride. Marlies is a D’Angelo Brown Sugar edit that is mellow and sounds great on a big system. I’ve closed many sets with this smooth track that probably lead to a small increase in the world’s population.

Another D’Angelo edit (Left&rRight) takes us on a whole other path with a bossa jazz sample and some snappy drum patterns that morph into full on hip hop claps. Red Astaire’s career has since grown exponentially, you can get a taste of what makes him such a great producer from this classic.

Who would have thought Nice & Smooth would work in sync with guaguanco. Melding their party vocals with Mon Rivera’s banging Lluvia con Nieve is pure genius. A sure party starter and battlebreak staple.

I love it when an edit makes me fall in love with an original and even if this song clocks in at almost 10 minutes, I could take another 20. You can’t go wrong with Stevie and MJ but adding some shakers and rhythmic to the perfectly produced track than isolating each amazing parts and adding sade like percussions turns a great song into a superb track. This will get everyone in the club grooving and after 5 minutes the epic breakdown start leading to a perfect finale that allows for a smooth transition. This is why GAMM releases are a necessity to all working DJs

Ive spoken at length about samooo’s on and on edit but the message of this post remains the same; GAMM’ variety and openness is what made it such a special label. That is what a labelhead like mad matts (coming to MTL this Saturday) can do: recognize dopeness and put it on wax. For the DJ or music fan that likes one release, going down the GAMM discography opens up ears to new styles and leads to discovering new artists. Finally, these are still readily available so go ahead and grab this amazing label’s music.