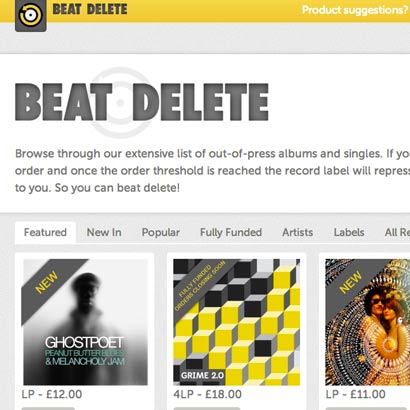 During the London riots in 2011, a warehouse of stock belonging to a huge list of independent record labels caught fire. It was a tragic turn of events for British music, particularly for some smaller companies already battling an increasingly hostile marketplace. No matter where in the world you’re reading this from, you probably either own or have heard music stored in the warehouse. Do Warp, Lex or Soul Jazz sound familiar?

Luckily someone at Ninja Tune, another label affected by the fire, had an idea to bring lost records back; take the concept of crowdfunding and apply it to out-of-print music. A year or so later, Beat Delete was born.

Simply put, Beat Delete is Kickstarter for vinyl. Indie labels including Big Dada, Brainfeeder and Brownswood set minimum orders for a selection their deleted records. You browse the catalogue, pick what you need and as soon as a title hits 100%, it’s repressed and delivered to your door.

The first record to reach full funding was MF DOOM alias King Geedorah – Take Me to Your Leader. By the time I’d found the Beat Delete website, it had gone well over 200% and they had stopped taking orders. Even just a few months in, the success of Beat Delete poses some interesting questions for the music industry. The appetite for niche represses is clearly there but is there any way it could work on a larger scale?

My first order arrived earlier this week; Roots Manuva’s solid gold classic debut album Brand New Second Hand. It cost £12.00, less than half a mint copy of the original would set me back. And best of all, the Beat Delete family is growing. Ghostly international recently joined the fold and I’ve already started harassing them on Twitter to repress old Dabrye records. Please join in.