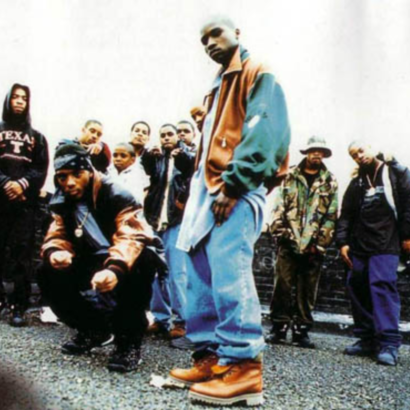 Ok, Mobb Deep isn’t the most “forgotten treasures” pick type of rap groups but you know sometimes I use that section just for overlooked / slept on joints.

For some reason, walking and listening to music in the winter reminds me of mid-90’s NYC rap. There are certain records to me that are winter and others more summer. For Example: Tribe Called Quest‘s “Midnight Marauders”: Summer. Method Man‘s “Tical”: Winter. ODB‘s “Return to 36 Chambers”: Summer. Don’t think there’s a logical explanation though…

Mobb Deep is definitely a winter thing for me, can’t listen to that stuff in June. It’s a November to March thing. Maybe i’m crazy but The Infamous record has always been a walking with headphones in the city kind of thing. Just waiting for someone to give you the crook eye!

So, here’s one of the tracks I like the most out of that record. Produced by Havoc and featuring a great sample from Normand Connors‘ “You Are My Starship” (Buddah – 1976)

Check it out now..
Word up Son shit is ill kid..
Knahmsayin? Bein that we livin the motherfuckin trife life
Don’t have another day right?
It’s only right
Let me put you on to what happens Son never believe this shit
Kick that shit

[Prodigy]
It’s just another day drownin my troubles with a forty
That’s when I got the call from this brownskin shorty
She asked me where’s my crew at? Said we could do whatever
She got her crew too, and said that we should get together
I said, “Aight — just call me back in a hour
so I can take a shower and gather up the manpower”
Then I hung up the horn
And I thought to myself that it might be on
Cause this trick ain’t pick up the phone to call me in years (Why?)
Ever since I left the hoe lonely in tears
Ain’t no tellin what her friends puttin up in her ears
Ideas of settin me up, I’m not tryin ta hear
(Check it out, Son) So we take the gats for precautions
Plus this trick live in Brooklyn, home of the coffin
She might got a whole batallion of Bucktowners
Waitin for us to get up off the train and surround us
Or maybe, I’m blowin this shit out of proportion
But this shit do happen, to niggaz very often
So fuck it, a nigga gotta do what he meant to
My crew got my back, fuck the world is my mental
We put together five soldiers, the bitch called
My blood curdled, told me to meet her on Myrtle
Got to the plaza, we’re waitin for the G train
We put a plan together, just in case the beef came
Now we Bed Stuy bound
Far from home and on unknown ground
But together we six deep, with fire piece, nuttin sweet
First nigga frontin gettin lifted off his fuckin feet
It took eternity, we reached our destination
My heartbeat is racin like a cardiac patient
We finally got to Myrtle outside the train station
I saw not a soul, told my peoples to be patient
But hold up, thats when a black caravan rolled up
My legs then froze up, I grabbed my pound
Told my man, “Eyes open cause it might go down”
Said he don’t like the way the shit is startin to sound
Evey angle of the car was smoked out and tinted
So we couldn’t tell if the enemy was in it
It mighta been TNT, I wasn’t tryin to wait and see, we
jetted thru Marcy cause Dee’s ain’t baggin me
Word Son, they got us on the run, Dunn, see yo

[Havoc]
OK check it, you’re on your way to your girl’s crib
But the bitch live in the ‘Bridge
You ain’t really sweatin it, cause little do you know
The niggaz in the ‘Bridge be settin it
You thought you was safe and tried to walk the backstreets without heat
on the 41st Side (settin it) of 12th Street
The cyber-niggaz don’t give a fuck
Decide well if you come thru frontin, kid you gettin bucked
On your way, to apartment 3A
with a phat herringbone, let him slide, no days
Son get the heat, cause I’m about to stick em
(Fuck that shit, yo if that nigga front, yo hit him!)
Aight bet, so just hold it down
while I cock back the long three pound
You’re upstairs bonin, not knowin that I’m scheamin
Just the right time kid, it’s twelve in the evenin
You’re leavin out the buildin as you kiss your girl goodbye
Thought you was safe and got caught by surprised
“What’s goin on?”, as I reply,
“Shut the fuck up and don’t make this ‘to another homicide”
He tried to play tough so I put one in his brain
Even though I took his life, all I wanted was the chain
Come through truck without heat, how you figure?
When you in the projects keep your fingers on the trigger
But fuck that we’re juxin, if you got what we like you gets tooken
Put you on your back, send you on your way, yo good lookin
Now be catchin the cap that holes in ya Lewis in Brooklyn
Gettin to’ up from the flo’ up, hit the dress sto’ up
Got the 80-0 in case a nigga wanna roll up
Get’cha motherfuckin shit swoll up
Now it’s back to Queens to serve fiends
Makin G’s by any means, my eyes on my enemies
Sippin Hennessey, with my mind on some crime shit
One-time searchin me but never ever find shit
It’s the everyday, get the loot then breeze
Though my goal is to leave outta state, push ki’s
But all this bullshit holdin me down, I can’t leave
Fuck a 9-to-5, I get the loot with ease
Don’t even need a degree to earn a six-digit figure
I get mines slingin on the corner with my niggaz
Pullin the trigger when the drama appears
Cause that nigga worse enemy is FEAR
So yo….