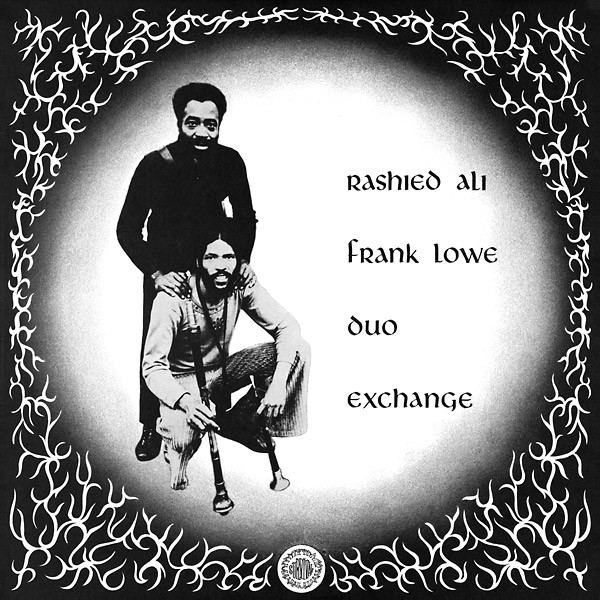 Out of print on vinyl ever since and a fierce addition to any jazz or avant-garde shelf.

From Thurston Moore’s Top Ten Free Jazz Underground (1996): “Frank Lowe has been studying and playing a consistently developing tenor sax style for a few decades now. At present he’s been swinging through a Lester Young trip, which can be heard majestically on his Ecstatic Peace recording Out Of Nowhere (1993).

In the early ’70s, however, he was a firebrand who snarled and blew hot lava skronk from loft to loft. He played with Alice Coltrane on some of her more out sessions. Rashied Ali was the free-yet-disciplined drummer whom Coltrane enlisted to play alongside Elvin Jones and Pharaoh Sanders (and Alice) in his last mind-bending, space-maniacal recordings (check out surely the Coltrane/Ali duet CD Interstellar Space (1974)).

Elvin quit the group because Rashied was too hardcore. Those were the fxckin’ days. And Rashied had his own club downtown NYC called Ali’s Alley. Duo Exchange is Rashied and Frank completely going at it and just burning notes and chords wherever they can find ’em. Totally sick. Survival was Rashied’s record label which had cool B&W matte sleeves and some crucial releases mostly with his quartet/quintet and a duo session with violinist LeRoy Jenkins.”