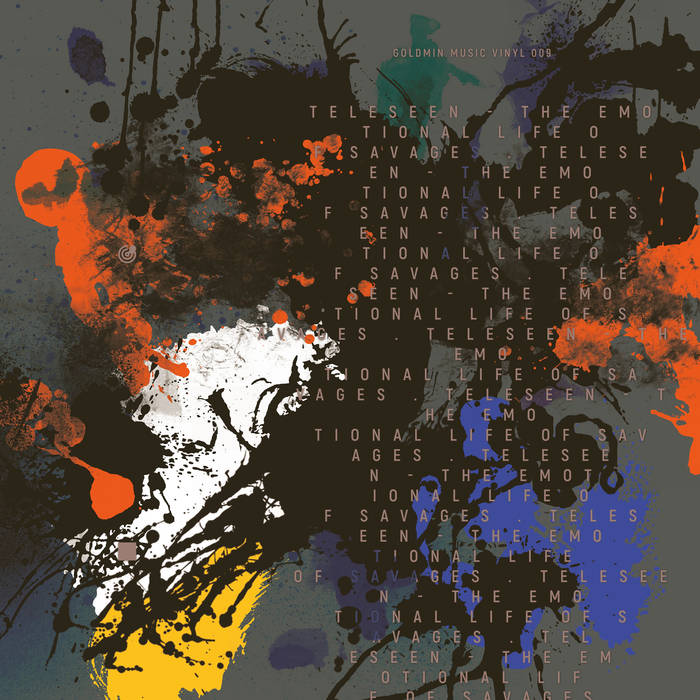 Teleseen’s Jazz background combined with a love for House and Techno are ingrained in the grooves. Also key is the Samba, Baile Funk and MPB that inspired him while living in Rio de Janeiro, plus the sounds he reabsorbed on returning to NYC’s club scene. The pancontinental sounds are mirrored in his own life, which has oscillated back and forth between various countries. We asked Teleseen a few questions about his latest offering, released on France’s Goldmin Records.

Is there something that unifies the songs on “The Emotional Life Of Savages”?

This record is a little bit more of a turn inward. On my last few releases most of the tunes began their lives as jams with other musicians, that I would then resample or add programming to and expand or edit. These six tunes all started as ways of me programming or playing a particular rhythm and then expanding on it, collaborating with myself a bit. So in that way its a little more personal, but its also more aimed the dance floor than some of my previous work.

Were there any unfamiliar musical avenues that you explored when working on this release?

In ‘Temporada de Seca’ I think I successfully managed to mix House and Techno with a certain type of Samba/Batucada feel. It’s something I’ve been toying with for a while but this is the first time I’ve really managed to make something that wouldn’t seem that out of place in either context. It’s something that feels both like club music and a percussion track. There’s even a few glimmers of Baile Funk in that track.

This is definitely one of the longer delays I’ve had with a release. We had some difficulty getting the artwork to a place we liked, and had some issues with distribution that took longer than I would have liked, but good things take time and I am really happy with the way it finally came out and how it’s being received.

My parents were both sort of hippies so there was a lot of Psychedelic Rock in the house I grew up in, as well as a lot of Blues, Folk, and Jazz. I started playing piano and guitar when I was seven or eight, and was always a bad student because I was focused more on drawing weird sounds out of the instruments and improvising than mastering the individual lessons! Thankfully as I got older I learned to do one without excluding the other. My biggest influence growing up was the radio, Providence RI where I grew up, is situated between Boston and New York, so there’s influence from both places and a lot of good radio from all the universities around.

Is there a meaning behind the title “The Emotional Life Of Savages”?

Towards the beginning of 2015 I was reading a Wilhelm Reich book in which he references the Bronislaw Malinowski book “The Sexual Life of Savages”, which is a study of the sexual lives of people in Melanesia, written in the 1920s. I was stuck by the phrase, both the strange use of the word “savage” and the clinical psychology tinged phrased “sexual life”. I toyed with replacing “sexual” with different things; “intellectual”, “personal”, but somehow replacing it with the word “emotional” felt both funny and evocative to me. The phrase stuck with me stuck me as being sympathetic with some stuff I like to do in my music; dislocate certain rhythms and to queer or subvert different ideas of the exotic and authenticity. In the end I thought it would be a great name for this collection of song.

I always know if a song is done if it sounds good when I’m in transit, riding the train or a plane. I particularly think my music sounds good on boats, I think a boat in the middle of the Atlantic Ocean is probably the ideal place!

If you were a DJ, what songs would you play before and after this release?

“The Emotional Life Of Savages” released May 4, 2018 on Goldmin Records

African rhythms, Latin heat and otherworldly electronics collide like neurons, processed through a New York state of mind. The pancontinental sounds are mirrored in his own life, which has oscillated back and forth between various countries.

A jazz background combined with a love for house and techno are ingrained in the grooves. Also key is the samba, baile funk and MPB that inspired him while living in Rio de Janeiro, plus the sounds he reabsorbed on returning to NYC’s club scene.

This wide range of influences spanning the global underground coalesces into a rich, vital and coherent whole. Warm and soulful, but also evoking an intoxicating, heady atmosphere, the hypnotic and ultra-rhythmic tracks subtly shift and build to fever pitch, due primarily to deft polyrhythmic drums and percussion – both played and sequenced.

“Working on this record I finally found myself able to manifest a certain sound I’d been hearing in my head for years, combining the rhythmic intensity of afro-house and afro-Brazilian music with the more cosmic sounds of Detroit and deep house”, explains Cyr on his musical vision.

The gentle sundowner glow of ‘Myrtle Avenue’ with its textured synth waves and wandering Parrish-esque keys acts as a precursor to the potent nocturnal adventure to follow: ‘Espelhos’ captures a similar essence to Black Science Orchestra’s classic ‘Save Us (The Jam)’, before the heat goes up and heads go down for the eastern-tinged, autotune-laden fire of ‘Khalil’.

The album then intensifies further still on the percussion-heavy, big bottomed cosmic throb of ‘Jaguar’, whilst Brazilian flavour meets tech house rush on ‘Fundos’, before the party reaches its feverish close on the wiggling batucada- meets-tribal-house of ‘Temporada De Seca’.

Born in the north eastern United States, as an adult Cyr has always been nomadic. He has sought to live and immerse himself in other cultures and absorb their sounds, but eventually always succumbs to the Big Apple’s magnetic pull. Back home, a key inspirational catalyst for the album was the Brooklyn-based party Africainoir, where he’s a resident DJ.

“It’s a night where we mix afro house, afro beats and deep house with broken beat and other more eclectic vibes”, says Cyr. “We’ve had Waajeed, Daz-I-Kue, Joakim, Recloose, DJ Spinna and Lexis from Music is My Sanctuary as guests. We also have a monthly radio show on Balamii’s New York station”, he adds.

Another facet to ‘The Emotional Life Of Savages’ is Cyr’s more individual and singular new approach to making music, having previously pursued of a “more of a band sound” sound on his own releases and in production for others. The latter includes work for the Brazilian rock band Dorgas and various yet-to-be announced South African artists, recorded when he lived in both respective countries. Further travels wide across Africa and south America have also ensued, due to his day job as a sound recordist for documentaries.

Cyr’s start in electronic music came as part of the post-illbient pirate radio scene in Brooklyn. “Illbient was a scene and genre late 90s/early naughties New York”, he recalls. “DJ Spooky is probably the best known person who was involved. There was lots of activity around experimental pirate radio during this time as well, and it’s in this context I started DJing and producing.”

Alongside cutting his teeth producing illbient/hip hop and working as an engineer, he ran his own studio for period, before starting his own label Percepts, on which to release his dub techno style debut. He has since released on 100% Silk, Boomarm Nation and Feel Up Records, and now ‘The Emotional Life Of Savages’ marks Teleseen’s first album for Goldmin records. Residing on a roster alongside respected cult heroes Terrence Parker, Wyndell Long, Boo Williams and Ian Simmonds, it’s peers like these that give an accurate validation of his own top quality form.

Nick & Astro's Guide To The Galaxy