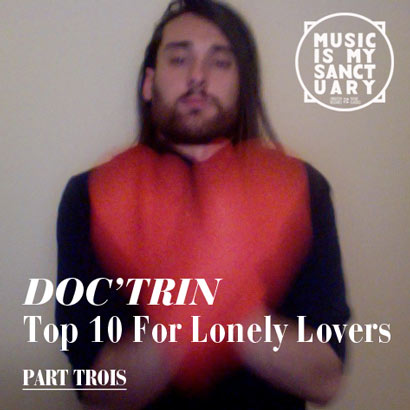 Once again it’s time for the Top 10 gems for Lonely Lovers by Music Is My Sanctuary’s Doc’trin. The third instalment is a great list of lovey jams of all eras & genres. Check it out!

They say it takes a lifetime to make your first record and around 2 years to drop the sophomore. Unfortunately, that is not the case with this incredibly gifted artist. Linda Perhacs, a highly-influential folksinger/songwriter, released her debut (and only) album “Parallelograms” almost 44 years ago. Although now-regarded as a cult classic, it was originally very poorly received and has only been popularized in the early-to-mid 2000s.

I remember the first time I heard this masterpiece; I grabbed my skateboard to cruise the neighborhood in the dark, soak in her haunting vibes and texted a few friends I knew would appreciate a good recommendation. By the time I got home, I had listened to the whole thing three times over.

I first heard this track through an Andrew Ashong mix and it stood out like a lie on a polygraph test. Those sweeping strings are the definition of “epic”. As if that werenʼt captivating enough, we are blessed with some recognizably charming vocals: Colin Blunstone, lead singer of The Zombies!

This song is a desperate plea to a lover, so in consideration of the aforementioned variables combined with heart-melting lyrics like “Iʼve been doing some dying, now Iʼm doing some trying”, Iʼd say it would take a strong person to not be overwhelmingly won- over.

Sarah Vaughn – Why Canʼt I

Last fall, in an attempt to detox my ears from dance music (not to mention catch up on some classics), I threw a request out to the Facebook world for some great singer/ songwriter suggestions. Friends had swiftly replies back with amazing artists such as Miriam Makeba, Gal Costa, Lee Hazlewood and of course, Sarah Vaughn.

“Why Canʼt I” struck me the hardest, not simply due to honest and lonely subject matter, but the variations she pulls off with her voice are very impressive! Check out they way she plays with her words at 1:49! The first time I heard this ending, it literally made me turn my head, walk to the stereo and rewind. Itʼs no wonder she is considered one of the greats!

Sarah Vaughn - Why Canʼt I

Letʼs get one thing straight, if you are looking for a Valentineʼs Day movie this weekend Vincent Galloʼs ”Buffalo 66” will not disappoint. Whether youʼre alone, with a loved one or even just a bunch of friends, this film suits almost any environment (ok maybe not a “family setting”). Itʼs one of my favorite films, boasting an amazing mixture of elements (ei: dark humor, twisted drama, romance) that are greater than the sum of their parts.

I wonʼt get into any of the controversies that follow him, but one thing is undeniable: Gallo is quite an accomplished man. He has single-handedly excelled as a painter, writer, director, actor, model, musician (he has a solo album on Warp)…the list goes on. Apparently he even owns upwards of 35,000 records.

Well Iʼve just been plugging the film here, but this song comes from one of the many great scenes. I wonʼt spoil anything, except for the fact that this version of “Fools Rush In” is credited to his real-life dad.

Hereʼs a great little lonesome track by a Paraguayan harpist named Sergio Cuevas. He appears to have been popular starting from the mid-late 50s, however online information on this man is scarce. I wrote a Forgotten Treasure about this recently and am still looking for more details on this musician if any readers our there can help.

Thanks to my homie Steve Kerr and his radio show/label “Total Stasis”, Iʼve recently taken quite an interest in ambient, orchestral and New-age music and am beginning to look for these sub-genres in record shops. I was happily pointed to “Opéra Sauvage” (1979) a beautiful, serene and solid soundtrack for a nature documentary of the same name, composed by Vangelis (who you may know from the “Chariots Of Fire” or “Blade Runner” soundtracks). This was recorded during his prolific electro-acoustic phase. I defintely intended on digging deeper into his vast catalogue.

I know itʼs cheese, but to me itʼs “good cheese”. Iʼm also open to the idea that I may not think the same way a few years down the road. For now, Iʼm just going to keep enjoying this B-side to “No Diggity”, which gives me funny mental images of – wait….ok…I just saw the music video….consider those images replaced by even funnier ones.

This song, along with Tupacʼs – “I Ainʼt Mad At Cha”, samples the hook from “A Dream” by Debarge.

If ever youʼre playing an R&B night, “I Wish” is a very nice tool to rinse out a certain vibe and start fresh with slow jams. That solemn synth intro has a very jarring-yet-soothing effect. I was tempted to share “Woke Up In The Morning” with you all instead, with the thought that it would be better follow-up to Blackstreet (thematically speaking), but this is just too classic and works almost equally as well.

After topping the R&B charts with this single for six weeks, Carl Thomas released his debut “Emotional” which went platinum. His second album was highly-anticipated, but didnʼt fare well as his step-brother was killed in a drive-by and affected promotion.

Kerri Chandler – I Think Of You (Reprise)

Everybody who loves deep house music will probably tell you that Kerri is one of their favorite producers (if not their favorite). In fact, if ever you come across someone who claims to be a deep house fan doesnʼt know or respect this man, it might be a good indication that they are simply posing.

Kerriʼs music is often very emotional, and it wasnʼt until I watched his Red Bull Music Lecture from Seattle in 2005 that I understood exactly why. Although itʼs extremely tempting to try and lure / convince people to watch this, Iʼd rather not ruin anything if you havenʼt seen it. All I can say is this: Kerri has been through a lot and has plenty of stories (sad, crazy, funny, inspiring) to keep you engaged. Heʼs also a pretty great speaker.

Kerri Chandler - I Think Of You (Reprise)

I donʼt need to say anything. You know Stevie is THE MAN. Just wanted end this list with a positive and important message. Enjoy! 🙂

Customized Cases for your 45's

"The Real Nina Simone” 1968 Interview in Down Beat Magazine