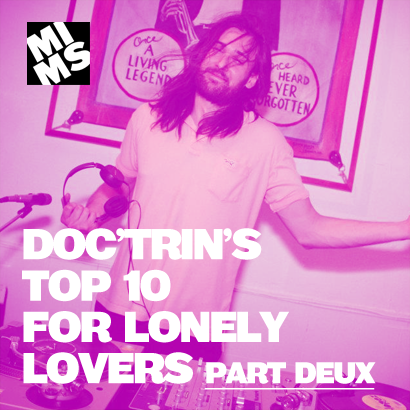 Here are ten more jams with themes of loneliness, heartbreak, hopeless romance, delusion and sad memories. It’s O.K to wallow, just as long as you get it out of your system.

To make sure you snap out of it, I’ve included a link to an interview where Sir Michael Caine explains how he met and married the girl of his dreams. I know that sounds super cheesy, but trust me, it’s totally amazing. Back to the music…

Although these tunes span across many genres (Rock, Soul, R&B, Techno, etc), I tried to piece them together in a way that makes sense both sonically and thematically. Basically, they sound pretty great played in order…

This is a perfect opening track for this playlist as it holds all the key elements: unapologetically open-hearted lyrics, floaty/dreamy melodies and excellent musicianship. Sadly, Arthur Russell (Dinosaur L, Loose Joints, Felix) was one of those great musicians who not only left this world at a young age, but had only gained most of his popularity posthumously.

He was a criminally underrated cellist/singer-songwriter who’s avant-garde compositions (which remain fresh to this very day) transcend our understanding of disco, rock, folk and many other genres. Pure outside-the-box thinking! Rather than share any more about this extraordinary man I will point you to one of the best music docs I’ve ever seen: Wild Combination: A Portrait of Arthur Russell. Absolutely essential!!!

Ah yes, once again I become a sucker for some old-fashioned straight-forward powerfully-honest and wonderfully-wholesome songwriting. CAN’T GO WRONG, RIGHT?

Apparently record label executives had told the band that Cherish sounded “too old and archaic”, but this tune stayed at #1 on U.S Billboard charts for three weeks and has since become a classic. In response to this, here is a clever quote from The Association member Jim Yester in an inteview with The Sun News: “The running gag is that we just showed we can have our archaic and eat it, too,”

Shout outs to homie Adam Wilcox for throwing this (and many other awesome tracks) onto my Ipod years ago. I can honestly tell you that I probably wouldn’t be DJ-ing or writing for MIMS had he not selflessly started me up with tons of great music during our hang outs. I mean, he would honestly drop GIGABYTES on a brother just out of the excitement of sharing. How many DJs do you know would do such a thing? Since music is my life, I am eternally grateful. If you can think of someone who’s done the same for you, send them some love (or at least a few good tracks)!

In reality, this entire playlist could be comprised of songs from this folksy Norwegian duo because Erlend Øye (The Whitest Boy Alive) and Eirik Glambek Bøe are “the kings of calm”. Cayman Islands is my all-time favorite and it is definitely one of their most depressing numbers.

While the lyrics may come off as “romantic” rather than “lonely”, I believe the sombre guitar melodies change the context, making the story appear more like an unreasonable wish or daydream than a present-tense event. I’d tell you to watch the video for proof, but it’s just too awkward. I have no idea what’s going on there.

If you enjoyed this song then I suggest getting into the Quiet Is The New Loud and Riot On An Empty Street LPs (featuring Feist on two tracks). It also wouldn’t hurt to follow Erlend Øye who has a solo album (collaborating with producers such as Morgan Geist), a DJ-Kicks compilation (where he sings over many of the tracks) and is generally a well sought-after guest vocalist.

4. Mariah Carey – Always Be My Baby

This just might be the first song I ever got really attached too. I’m talking about a hilariously embarrassing “sing-into-a-hairbrush-all-alone-in-my-room-at-a-young-age” kind of attached.

Being a huge fan, I can talk tirelessly of her talent and how important she is to R&B, however I will leave most of my preachiness for what will hopefully one day become a “7 Most Underrated Mariah Tunes Of All Time” list. What you need to know (if you didn’t already) is that she writes her own lyrics, can hit a vocal range of 5 octaves, is famous for her whistle register (the highest sound level a human can make) and has sold over 200 million records to date.

Also, can I just say that Mariah was such a babe back in the day? Swinging on tires in this video, roller skating in short jean shorts in Fantasy and just take a look at the cover of her very first album! Oh Mariah, what happened? Why did you get some unnatural Hollywood retouches? Why are you such a diva in all the worst ways now? Why are you on American Idol having childish arguments with Nicki Minaj? Why? Why? Why? Shhhhhhhheeeeeeeeeeoooooooooo…

Mariah Carey - Always Be My Baby

5. Brian McKnight – Used To Be My Girl

Here is another talented RNB singer-songwriter that started their music career in the early 90s. This catchy tune however, comes from the album Ten (2006) which holds quite a few diverse hits (one of which I will probably do a Forgotten Treasure on sometime soon).

Used To Be My Girl is written in the words of a jealous ex-boyfriend who has some choice words and bittersweet advice for “the next somebody new”. Produced by Tim & Bob

Brian McKnight - Used To Be My Girl

6. Lucy Pearl – Without You (JayDee Remix)

What-a-track. The original is great with it’s choir-like harmonies, but let’s face it…what can compare with this moody Dilla joint? Our ears get treated with that signature heavy-hitting brash snare that makes for the most aggressively-synchronized head bops. All of a sudden the chorus “I can’t eat…I can’t sleep…without you” is intensified triple-time and ends up meaning just that much more! Much love and respect for this great collab.

Lucy Pearl - Without You (JayDee Remix)

Sexy smooth. I just can’t see myself ever getting tired of this 11-minute masterpiece! I’m assuming many of the “seriously strict” techno and/or house DJs might have skipped past this record due to the fact that it’s a DFA release (label now mostly famous for Nu-Disco and Synth-Pop) and if it wasn’t for strange stroke of luck, I would have too!

This is the perfect 12” for any of those DJs who are looking for a great gem to cool down their sets with (or build-up with for that matter). The listener is introduced with some filtered-hand claps as Bruno Pronsato can be heard practicing his sorrowful-yet-soothing lines alongside room noise, a mellowed out synth loop, a playful flute, somewhat random spurts of drumming and a mysterious voice asking “Are you ready?” All of this lays the foundation before Bruno delivers his melancholic message and the real beat drops. It’s beautiful from start to finish. On repeat and repeat.

NDF - Since We Last Met

You might recognize the sample from Captain Murphy’s Children Of The Atom (produced by Flying Lotus and Madlib), but I came across this song on a sick soul compilation: Loving On the Flip Side: Sweet Funk and Beat-Heavy Ballads 1969-1977 (Now-Again Records).

Bassists will surely drop their jaws at the arrangements on this original. I just love the title “Slipping Around” and even more so when I noticed the piano player’s timing slips for split second at 2:09. Considering the repetitively-punchy piano chords and the sweet drumming party towards the end, this would make a really fun cover for your jam band!

Well this was an obvious choice. Who can deny the genius of Bill Withers? Arguably one of the best songwriter’s of his time. If you’re not convinced, just watch his documentary that came out a few years ago: Still Bill. It is a must see for music lovers. The man is a legend. You can hear his soul in every song. I can’t think many artists that convey realness better than Bill.

I don’t really cry in reaction to things on screen, but I am unashamed to tell you this clip (which I must have seen 10 times by now) makes me weep with a 90% success rate.

Sure there’s some cheesy acting and imagery, but I think the message driven by both the lyrics and music is too powerful to be distracted by anything else. This can be very hard to watch in consideration of the life of Johnny Cash and/or perhaps even your own.

I feel like starting my life fresh after every view. It makes me want to do away with all the seemingly “important” things I occupy my time and energy with and focus on “what really matters”. This music video encourages me to live unselfishly, let go of certain situations, forgive everyone I know (including myself) and just live a happy life free from my own chains.

Despite the title of this playlist I just can’t leave you on such a lonely note. Here’s that interview of Michael Caine I was talking about. Start this puppy at 2:09. If this doesn’t lift your spirits I don’t know what will.