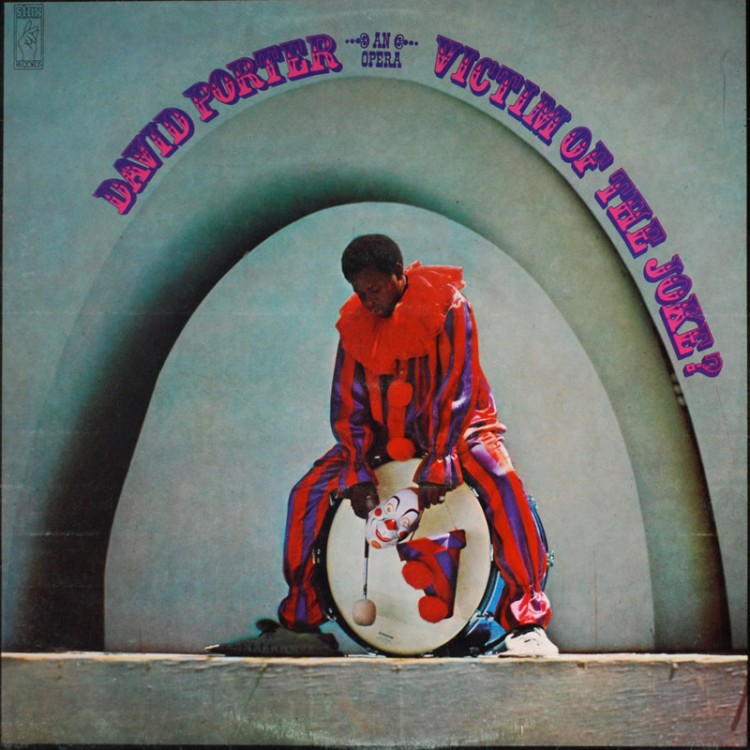 Forgotten Treasure: David Porter “The Masquerade is Over” (1974)

To say that David Porter‘s Victim of the Joke LP was an ambitious album is an understatement. Billed as a soul opera, the album is full of overproduced arrangements and spoken word scripted excerpts between and during songs. Most of the record is confusing and overdone, but the final track aptly titled the Masquerade is Over is a songwriting tour de force and a soulful masterpiece well worth the price of admission.

Indeed, the context of soul music in 1971 is the apex of the genre in terms of commercial success and artistic freedom. Stax/Enterprise are basking in the success of the multiplatinum Isaac Hayes penned Shaft soundtrack, so releasing an epic opera album from their second biggest composer/arranger/performer does not seems that far fetched. They put the total package with an intricate gatefold fold out revealing a happy/sad clown image of Porter dressed as the protagonist. And even though they probably never recouped the production budget in terms of album sales, they allowed for the creation of a true soul gem.

The 9 minute opus starts off with strong horns and solid arrangements but a classic soul standard approach: average vocals and storytelling about a love that is not as strong as it once was. We have all been down this road before, but at around 4:20min the song takes an unexpected turn and as a first time listener we are not ready.

A dark break (sampled for B.I.G’s eerie Who Shot Ya) with stiff drums and clinking dramatic piano takes over as Porter narrates why the couple is putting on an act. The female counterpart tries to explain that she is still infactuated and Porter warns her this is going to hurt and he regrets having to say that….it’s over. That is when the signer unleashes a level of emotion that is off the charts and the break builds up with powerful horn stabs. The masquerade is indeed over and Porter reveals the depths of his soul with a guttural performance that needs to be heard to be believed and does not let its foot off the pedal until the end of the song.

This song has become a staple in my house with my wife keeping it on constant rotation and encompasses all the best in soul music: outrageous strings and horns matched by pure vocal intensity. It came out the same year as an other ambitious concept album: Marvin Gaye’s emblematic What’s Going On. However, before Gaye was given (or demanded) the freedom to compose, he was placed in a formulaic doo-wop box and recorded a song with the same title, but a totally different composition and impact.

Biggie’s sample is one of the best chopping production jobs in history, but for a perfect isolation of all of the song’s best parts, check out this Dub version by edit master and stem crack dealer Kon.

1971 was a great year for soul music and i sorely hope artists/labels today can be as confident and bold to allow such moments of genius to be etched deep into vinyl for future generations.