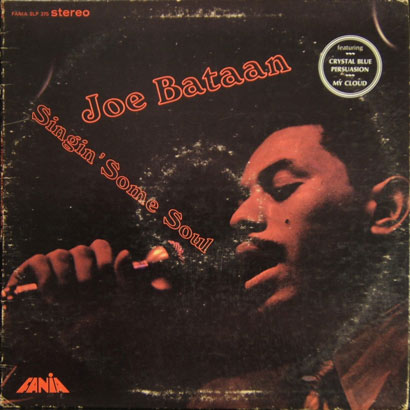 Joe Bataan, the Afro-filipino vocalist and self-proclaimed King of Latin Soul has released many classic records during an illustrious career that includes 15 albums covering a variety of musical stylings from Boogaloo (Subway Joe) to Disco-Rap (Rap-O-Clapo). However even if Bataan is famous for uptempo dancefloor hits (Latin Strut), I first discovered his work through the single My Cloud off his incredible soul album Singing Some Soul (Fania-375, 1972).

It was the lush intro filled with a full string and brass ensemble that immediately caught my attention when i needle-dropped the 45. Then Joe’s unique voice brought palpable emotion to this sweet soul ballad and I knew I had found a slow jam keeper. However, I was surprised that this soulful track was released on Fania a Nuyorican label known for it’s salsa dura and bad boy boogaloo. It turns out that after taking on the latin competition (labels Tico and Allegre), Fania label head Jerry Mascucci ambitiously decided to go after Motown and release an Rythm & Blues record. They approached Bataan, one of their top vocalists, because of his powerful voice and ability to cover soul tracks (he had already done so with Smokey Robinson’s Riot! and The Impressions’ Gypsy Woman). After picking the songs, Fania assembled an all-star team of musicians such as Nina Simone collaborator Harold Wheeler, guitarist Cornell Dupree and soul drummer extraordinaire Bernard Purdie for the session.

The resulting record ranks highly with soul collectors but was not popular with the barrio crowd so its sales were not impressive, leading to its current scarcity on the vinyl market. I was lucky enough to be hooked up by Good Records NYC’s owner with a 5$ mono copy! It quickly became one of my favorite LPs because of its consistency, the collection of stellar soul tracks and the doo-wop lowrider feel that transcends the album, in sharp contrast with the majority of Bataan’s recordings. Some of the record’s most powerful tracks are Bataan’s own compositions (Unwed Mother, Young Gifted & Brown) which carry a deeper social message, however my go-to song in the syrupy O’Jays ballad (I’ll Be Sweeter Tommorow) which happens to be the song chosen for my wedding’s first dance.

Although Joe Bataan can never be forgotten (if you witnessed his Afro-Latin Soul performance last september you know he’s still got it) and his career is still going strong (Pick up his King of Latin Soul compilation for an overview) Singing Some Soul never got a chance to truly shine. Up to recently it was his only album to never be reissued, but the good folks at Fania (going through a renaissance of their own at the moment) have included two bonus tracks and stellar liner notes so that, finally, this treasured recording can be shared with latin-soul fans all over the globe.