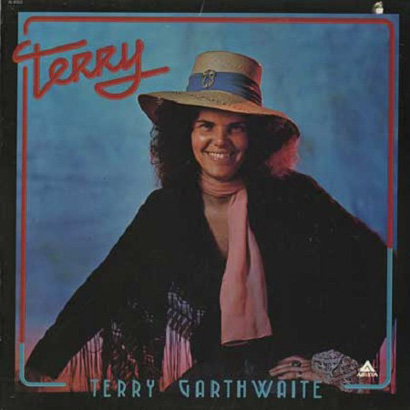 My first contribution to Music Is My Sanctuary comes courtesy of Terry Garthwaite. The lady in question is really my kind of artist/musician. She is a virtuoso guitarist that used to be the go-to woman for country studio recordings in the 70’s, some sort of lady Jerry Reed if you will, and believe me, in the macho world of 70’s studios that’s saying something. She was also part of band called Joy Of Cooking which was staying more in the folk/pop/country territory.

On her own though, while keeping that country flavor, Terry was going for a way funkier sound. And that’s just what grabbed me by surprised when casually watching that Theo Parrish interview in which he is just sitting there while a London record clerks try to impress him with some obscure records.
That song came in and I was floored, the funky bass/guitar riffs, the rhodes playing, the heavenly backing vocals and the mention of Patrice Rushen involved somehow in this (I’m an absolute sucker for anything that other superwoman musician has been involved in).

Problem was the guy wasn’t saying anything about the record itself so I had to submit myself to a session of pause/stop/pause/stop/rewind on YouTube before I could actually decipher something on the label to feed Google in order to track this one down. 21st century digging I guess.

Long story short, even though I couldn’t find any video or any way of verifying I had the right title on the internet, I found it. And what a catch.

The whole album is quite fantastic. You will have to be OK with putting some country in your groove to appreciate this one though. But if this doesn’t bother you, you’ll have a blast. The whole thing is super catchy, groovy, empowering music and pretty cheesy; just the way I like it. Terry’s raspy blues voice isn’t that far from Janis Joplin‘s. Her guitar playing is just fantastic while just serving the music (no rock solo masturbation here), in fact all the musicians on this are incredible (some pretty crazy names in here like the aforementioned Patrice Rushen on keys and Ron Carter on bass). The arrangements are taken care of by Terry herself.

Here are my two favorites of the album:

"Saint Nina" Shirt by Miss Me