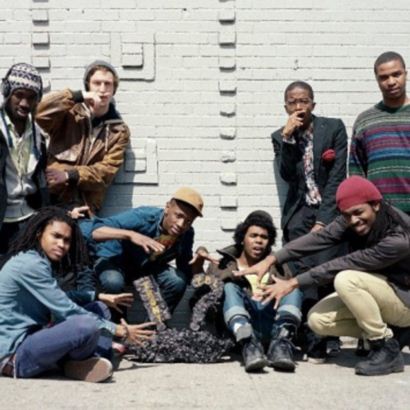 There is just something about hip-hop collectives that i’ve always loved. There seems to be an energy and honesty that comes out of groups that are more than 3-4 members. The Pharcyde, Little Brother, The Roots, Quakers and countless others all had that creativity that made them stand out in a more traditional hiphop landscape.

A few media outlets have made the mistake of identifying PHONY PPL, the Brooklyn-based collective, as an east coast equivalent of Odd Future. Yes, the youthful enthusiasm is the same but the approach is a lot more like The Roots were when they were coming up. You can tell when a band is backed by musicians rather than drum machines and samples; it just has a very organic quality similar to the aforementioned crew from Philly.

I discovered them recently with a free EP called “Nothing Special” which we included a track on our most recent MIMS Show, but i’ve been going back to discover their previous work including an outstanding LP called “Phonyland” released earlier this year.