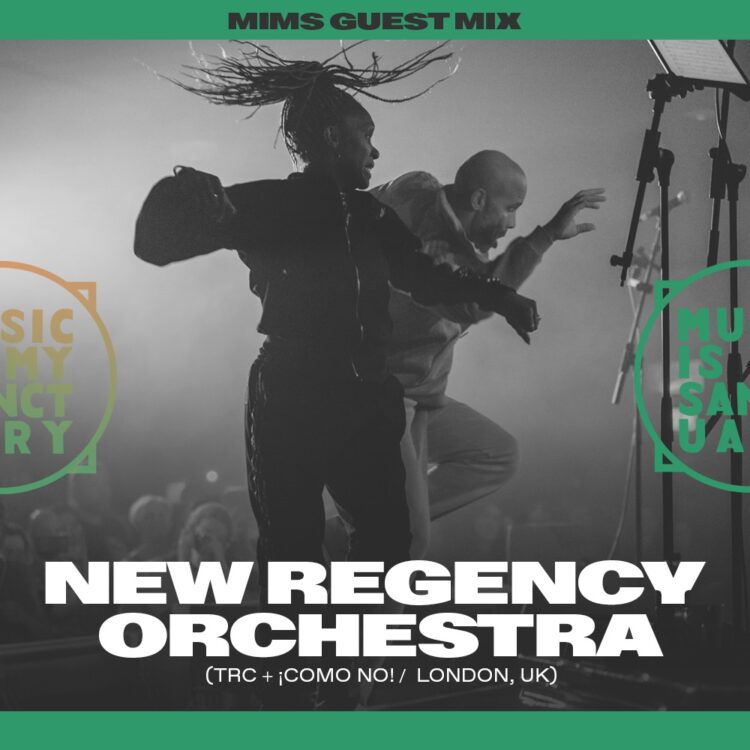 Ahead of their first London show since playing the main stage at We Out Here, this coming Friday at London’s Colour Factory, we are excited to share a special mix by TRC founder and NRO curator Lex Blondin celebrating the musical influences of London’s premier Latin jazz big band, New Regency Orchestra, featuring their brand new debut single,“Mambo Rama”.

Lex Blondin: “This mix is a bit of a tribute to Tito Puente , showcasing his compositions, intricate horn arrangements, and of course his amazing skills as a timbale player and soloist. The lyrics in Eddie Palmieri’s ‘Bajo Con Tumbao’ asks a very pertinent question whilst laying it all down:

I’m also going all the way back to the originator of Mambo , the OG Arsenio Rodriguez with two of his deepest tracks. ‘Chinito’ and ‘Esas No ‘ have such hip hop energy to me… These two are on the waiting list awaiting to get the NRO treatment. There’s a few extravagant mambos with the don arranger Johnny Richards, all the way to 70’s NYC salsa via Puerto Rico… That Orquesta Colon is so damn sophisticated and groovy that it might have to land in the NRO set too.. And a touch of mean cha cha’s for good measure. In a nutshell the sound that I’m trying to pursue with the New Regency Orchestra.”

Below follows more info on NRO and their new single direct from TRC / ¡COMO NO!

Lex Blondin’s flip version brings a more modern take on this classic as drums and synth bass elements are brought into the mix, taking a hip hop and dub approach to layering and sound treatement. Almost a remix of the original, the track features instrumentalist and composer Momoko Watanabe Gill (Tirzah, Coby Sey, An Alien Called Harmony) on drums and Korg MS-10 , Alex Burke (Forest Law, Esa, Haha Sounds) on various percussions with contributions from Capitol K and Kissu.

Inspired by New York’s dynamic collision of jazz and Latin music from the 1950s to the 1970s, New Regency Orchestra grew from Lex Blondin’s “obsession” with record digging and the importance placed on creating community, two things at the heart of his work as founder of now studio/rehearsal space and former influential London live music venue, Total Refreshment Centre (TRC).

Having reconnected with percussionist Crispin Spry Robinson, at a session recorded at TRC in April 2021, Blondin and Robinson realised both shared the same dream of making an Afro-Cuban big band, fused with the sounds of contemporary London. They enrolled Cuban-Argentinian pianist/arranger Eliane Correa, and renowned arranger/composer & conductor Nathaniel Cross (SEED Ensemble, Zara McFarlane), to flesh out a high-energy, bustling setlist, brimming with Nuyorican basement club atmosphere. Seeking to pay homage to the sounds and Afro-Cuban musical saints of yesteryear but reinvent it through a 2021 London filter and present it to a new and engaged audience, New Regency Orchestra was born.

With fresh arrangements on timeless classics written for each performance, and a lineup of London-based musicians raised on a steady diet of Coltrane, reggae/dub soundsystems & Pirate Radio, New Regency Orchestra breathe new life into decades-old music.

“We’re going to hit the refresh button every time. We’re going to come with new tunes, new edits, new soloists. Basically there are no limits. We want to surprise people and get creative. We might throw a grime MC right in the middle of it.” – Lex Blondin