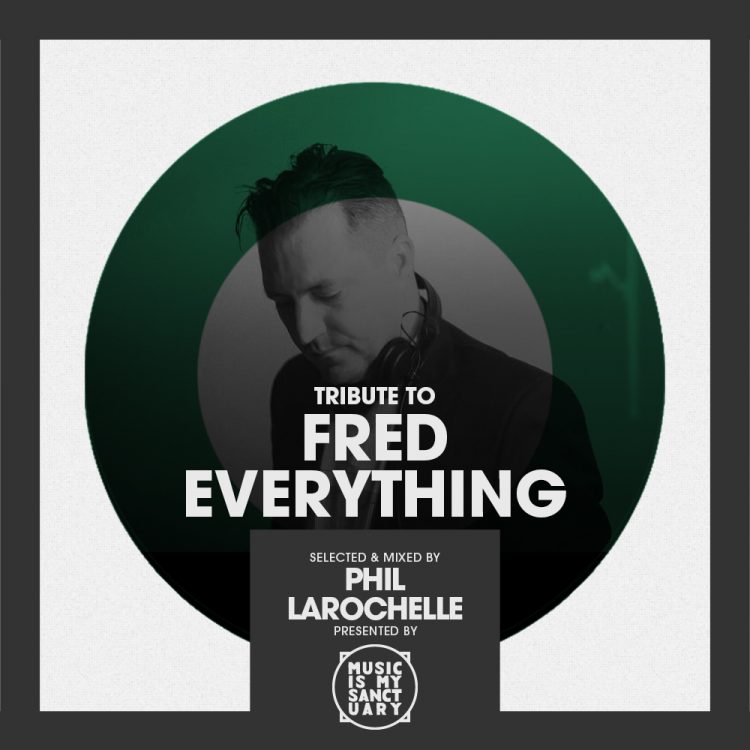 I met Fred in 1992 on my first ever DJ gig in Quebec City. We became friends and I’ve been a fan of his music ever since. I still remember the pride I felt when I put the needles on his first record in 1995 so I decided to put together a mix to celebrate 25 years of music in 25 tracks.

This mix is neither chronological nor a “Best Of”, It’s rather a collection of my own personal favourites of Originals, Remixes, Collaborations, Bootlegs that have marked my musical journey through the years in a discography that spans over 2 and half decades and over 250 releases.

I hope you will find as much joy as I did discovering or rediscovering the many moods and many shades of Fred Everything.

I sat down with Fred to play him my mix and reminisce a little about the events, places and meetings that led to the existence of those tracks.

Thanks for Everything, Fred.

1.Fred Everything feat Rise Ashen – Find Your Way [20:20 Vision] UK 2004
From my second album, Light Of Day featuring Rise Ashen from Ottawa who also sang on the title track. This one showcases a slightly more electro influence, written shortly after Here (Now) released as a b-side of the single Over You which came out a year before the album.

2.Fred Everything – Revolution [20:20 Vision] UK 1999
One of my biggest “hits” from my first album Under The Sun on 20:20 Vision which was also licensed by Turbo for North America. Tiga had an idea to do a video for it, which was filmed in an arena in Westmount. It features myself on vocals, through a Talk Box. I was using an Atari at the time without any audio so I used to have to sample every phrase and sometimes words and sequence it after.

3.Random Factor – Broken Mirror (Fred Everything Dub) [20:20 Vision] UK * Brique Rouge 2002
My first official commissioned remix. I was working closely with 20:20 Vision at the time and Carl Finlow (Random Factor) was a key part of the label. I had no idea or simply forgot, but the vocal mix never made it on the original release on 20:20 but was licensed to Brique Rouge in France where they wrongly labeled it “Unreleased Dub”. So confusing!

4.Barrios Bros – Hold On To Your Love (Fred Everything Remix) [Shaboom] UK 2002
I used to visit Mark Bell’s studio in Blackpool when I lived in London and when I visited the UK. Mark ran Shaboom Records and often hosted US producers in his studio and on his label. The original of this one was done by Joeski and Onionz on Electrik Soul. The only part they sent me was the poorly recorded vocal. I wanted to use the original sample but didn’t know what it was. I called my friend François (aka Dr Love) and he was able to ID it over the phone within a second. It’s by Rufus and…

5.Afro Love Project – One Love – [Tronicsole] UK 1998
I went to Glasgow to play the Sub Club on my first trip to the UK in 1997 and met the people who ran Sole Music/Tronicsole. I played them some demos I had at the time which were very influenced by the Broken Beat sound going on around the time in West London and they signed this one right away.

6.CJ Hilton – I’m Losing You (Fred Everything Remix) [Unreleased] US 2011
I went to LA in 2008 to record Ndea Davenport from The Brand New Heavies for my album Lost Together on Om. A friend of mine, Chuck was working as an engineer at Raphael Sadiiq studio. They played me a bunch of tracks they were working on with a singer called CJ Hilton. I hadn’t heard someone with such a true soulful voice in a long time and the guy was only 19 at the time! Full on Motown arrangements, Live Strings, Spring Reverb…They let me have the stems for 2 tracks, but unfortunately, the album was shelved by the label. A bit of a sad story but I feel fortunate to have been able to remix such an amazing song.

7.Catz’n Dogz – Czas Poczeka (Fred Everything Remix) [Pets Recordings] GE 2016
This was the intro song on their first album. It was shorter so I worked on an edit to play out and sent it to them. They loved it so they sent me the full stems to finish properly and proposed to release it as part of their remix album.

8.Flowers & Sea Creatures – A.M. (Fred Everything Stripped Mix ) [Buzzin Fly] UK 2011
I met Ben Watt at his Lazy Dog party when I lived in London. He invited me to play with him a few times. Fast forward many years later, he received a demo from a yet named duo from Montreal. He could hear something in it but needed someone to produce a proper demo so he asked me. I had already relocated to San Francisco but took on the project as a challenge. It was a turning point for me as a producer to produce a band from scratch and to explore other sonic territories. I produced a few more tracks and remixes for the album which was also co-produced by Ewan Pearson.

9.Dominique Fils Aimé – Free Dom (Fred Everything Remix) [Fooliage] UK/CAN 2019
A similar story for this one. My good friend Atjazz in England was asked to supervise Remixes for a project that a label from London took on. I had no idea the singer was from Montreal until I googled her. One of the most interesting and challenging Remixes I had the pleasure to do.

10.Fred Everything – Winter Dubs [Drumpoet Community] GE 2016
My 2nd EP for Drumpoet Community which was originally supposed to be released on Gerd Janson’s Running Back. Because of their busy schedule, Gerd suggested instead to do a Remix with his partner Lauer as Tuff City Kids for the release on Drumpoet, who were also interested in the track. This is one of the last thing I did while still living in San Francisco. It’s influenced by early Detroit sounds and by a newly acquired Korg MS-20 and Arturia Beatstep sequencer.

11.Fred Everything – Truth [Lazy Days] CA 2016
One of the first things I did when I moved back to Montreal. I was working on several tracks at the time that fitted together but it quite didn’t feel like an album to me, so I released it as a 2 part EP. This one was featured on Les Jours Paresseux PT2. Influenced by early 90s Progressive/Dream/Balearic House.

12.Fred Everything & JT Donaldson – Listen [Freerange] UK 2006
I invited JT to play one of my early Lazy Days night in Montreal and we did a track at my house an hour before going to the club. I visited him shortly after in San Francisco on a transit to Asia and we wrote this 2nd track to go together for an EP. I was (and still am) a big fan of Freerange, so it was an obvious choice when it was time to look for a home for it.

13.Demarkus Lewis feat. Dani Deahl – You Remind Me (Fred Everything Remix) [Lazy Days] CA 2006
Lazy Days started in 2005 with a big release, Friday, thanks to a certain Trentemoller Remix. There was no way we could or wanted to follow up with another release of that caliber. I really loved this EP that Demarkus sent me with this lovely poem by Dani Deahl so I copied the vocal in a session I started that had this melancholic mellotron string line. There’s a strong Mood || Swing influence on this one. Interesting fact, there’s a cameo vocal from Demarkus on my remix that’s not on the original. It was just a guide for the rhythm for Dani’s poem.

14.Fred Everything & JT Donaldson – Here Come The Beats [Lazy Days] CA 2008
Another one done on a trip to San Francisco just before I moved there. The few times JT & I worked together, there was a real chemistry in the studio. We knew exactly where we wanted to go and how to get there.

15.Fred Everything – Got 2 Give [20:20 Vision] UK 2003
This is the B-side of the vocal track For Your Pleasure feat Karl The Voice on 20:20 Vision. I think I originally started this in Reason on my laptop. I was very influenced by SOHA/Julien Jabre and the whole Parisian Deep House scene at the time.

16.Fred Everything feat. Fourfeet – Soulmates [Om Records] US 2005
This one was written for my Mix CD House Of Om. Big West Coast influence on this one.

17.H-Foundation – Tonight (Fred Everything Remix) [Soma] UK 2003
I heard a rumor that Hipp-e and Halo (H-Foundation) wanted me to Remix the first single off their first album on Soma so I reached out to find out if it was true, and the rest is history. It was a thrill to be able to do something for SOMA, which had been an early influence of mine. There’s also a nice King Britt Remix on the flip.

18.Frédéric Blais – World Of Music [Fair Park] US 1998
One of my early early release. I think I got the connection through DIY in the UK, who I had just done a record with. Fair Park is a crew from Dallas.

19.Fred Everything – Forever [Bombay] CA 2005
I did lot of Remixes for Bombay at the time (Roy Davis, Derrick Carter…). When I was preparing my Live show for the Montreal Jazz Festival, I recorded a track with local saxophone player Luc Lemire and this became Forever. It was originally supposed to be on my 2nd album Light Of Day but was rejected by the label.

20.Switch – Get Ya Dub On (Fred Everything Remix) [Freerange] UK 2005
Switch gave me an early white label of Get Ya Dub On and I played the track a lot. When it was time for an official release on Freerange, Jimpster asked me to remix it.

21.Brett Johnson & Dave Baker – On The Highway (Fred Everything Remix) [Lazy Days] CA 2006
My friend Diz from Chicago used to play this unreleased track with a haunting vocoder all the time. When I found out it was unreleased, I asked Brett if he wanted to put it out on Lazy Days with my remixes. I loved the vocals. It’s about a guy who got into a bad car accident and sing about his transition into the other world.

22.Spottie Ottie Thing [White] CA 2004
I did a few “unsolicited” remixes in my time. This one is from an Outkast track. I made an old school Chicago House inspired track in Rebirth on my PC and added the acappela on top.

23.Yello – Bostich (Fred Everything Remix) [White] CA 2011
Another one…parts were on Beatport for a Remix contest so I couldn’t resist the opportunity to do a remix of this classic.

25.Fred Everything feat Jinadu – Silver Light (Instrumental) [Lazy Days] CA 2018
From my last album, Long Way Home. When I played the album to my friend Phil (yes, that same Phil who did this lovely featured mix!), we both felt that something was wrong with this song. We then decided on the spot to change the whole beat from an original half time Dub track to a Dub House version. It features Jinadu who also sang on my song Searching.

Exclusive Premiere: Inxxxwel "I Love Her" 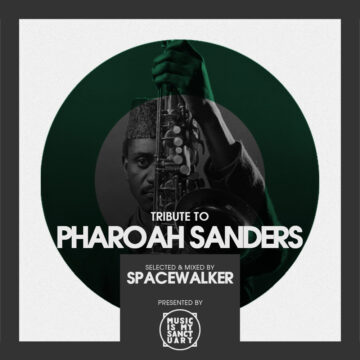