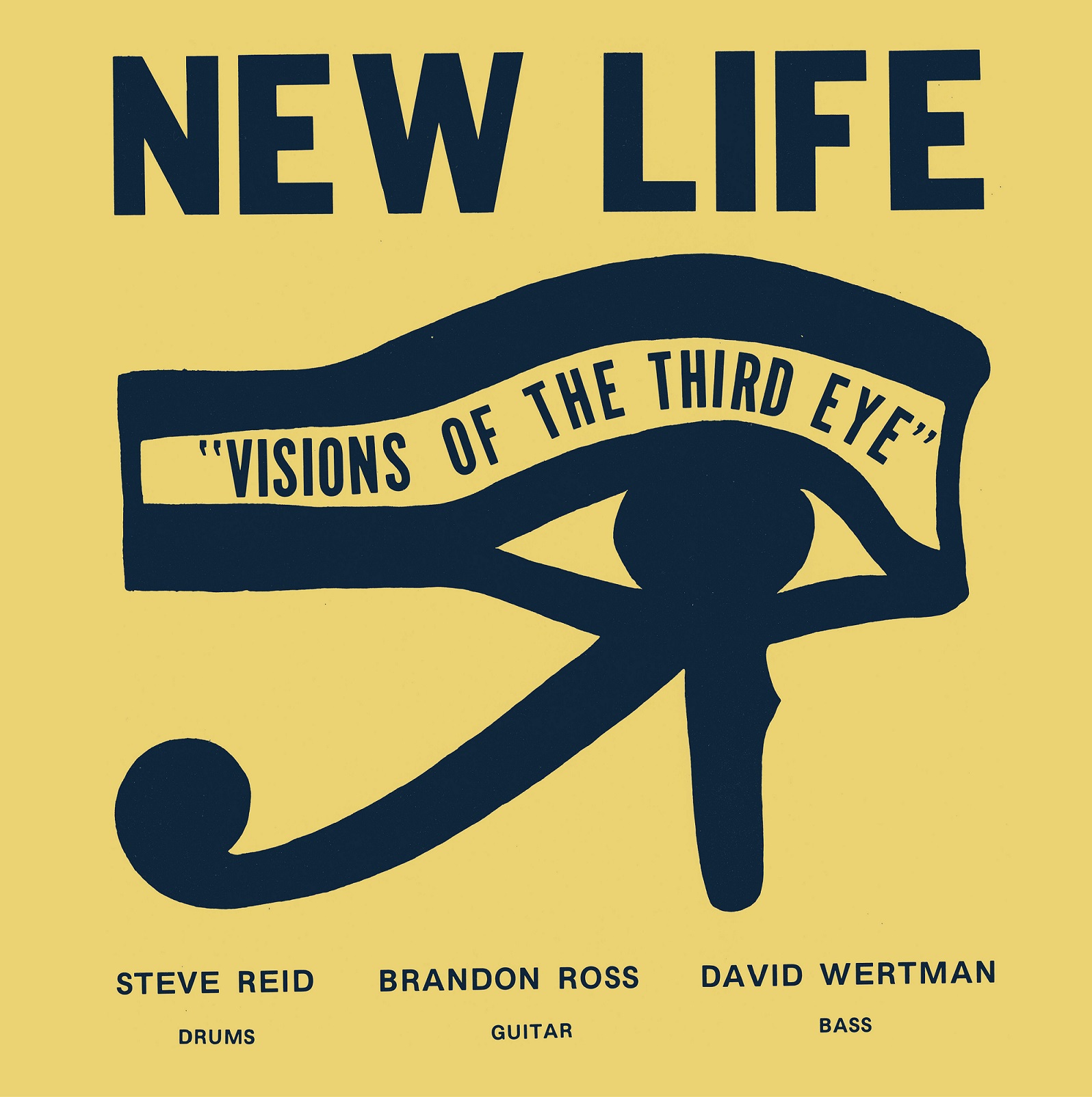 So, ‘Visions Of The Third Eye’ by the New Life Trio, was I believe the last release on Steve Reid’s legendary label “Mustevic Sound“, and is a record sought after by crate diggers, jazz freaks and all manner of vinyl collectors the world over. An original might see you remortgaging your house, if you could even find a copy out in the wild, that is (slight exaggeration perhaps, but you get the general idea of its rarity).

So what exciting news it was to hear from Alex Arnold at Early Futures Records and to discover that I may be able to get hold of a copy of this masterpiece from the trio of drummer Steve Reid, bassist David Wertman and guitarist and surviving member Brandon Ross.

As you can imagine, this is an absolute favourite album of mine and I was just dying to ask Brandon and Alex a few questions about all of this. I spoke to Brandon first.

Hi Brandon, great to meet you like this! So how and when did you first meet Steve Reid & David Wertman, and how did you come to form the New Life Trio?

@brandonrossnyc: First met David in Northampton, Massachusetts in ‘78, or late ‘77. Through David’s initiative I met Steve in December of ‘78, when we recorded “VOTTE” (“Visions Of the Third Eye”). David invited Steve to join him and me for a Recording we had planned to do in another instrumental configuration that didn’t include drums at all. A last minute change resulted in the birth of New Life.

Did you perform this material very often ‘live’ around that time?

@brandonrossnyc: Actually in other combinations in Northampton. David and I were playing with various other musicians up in the Pioneer Valley and hanging a lot, and playing some of his music and some of mine, but not so formally. After we made VOTTE, I believe we discussed performing, but Steve was in NYC, and busy at that time with Charles Tyler, among many others, and developing his record label Mustevic Sound. David and I were a 3.5 hour drive away, so it wasn’t very practical to develop a group and to find opportunities to play and be paid properly.

How many copies were originally pressed up of the ‘Visions Of The Third Eye’ vinyl?

@brandonrossnyc: I believe Steve did a run of 500 copies originally, because that seems likely as it was the primary format back then.

And how many have been newly reissued?

@brandonrossnyc: The initial reissue run is 500 copies, with a supplemental Zine insert, with as much archival material as we could use to enhance the provenance of New Life. We’ve got photos and score reproductions, and original label promo material and reviews.

Was it difficult to get music like this released back in the mid 70’s?

@brandonrossnyc: Back then, I was just getting started… I was really a ‘kid on the block’ – and hard at work developing my music and skills so that I could go down to NYC and really learn and hopefully work with the musicians who had been inspiring me. Steve began his label exactly because independent creative music was not broadly supported by the major labels, and the ‘gatekeeping’ situation kept many musicians out of the attention of the People. Mustevic Sound was a DIY initiative intended to record and promote Steve’s music and the creative musicians Steve was affiliated with.

How did you find it surviving as a black musician in those times in NYC and have things changed or improved, do you feel there is still a long way to go?

@brandonrossnyc: Again, I wasn’t yet living in NYC at that time. I felt I wasn’t ready on all the levels involved with being able to live in NYC as an artist musician and be successful doing so. There are so many extra-musical skills to have in your toolbox. Refining the musical skills in itself, is a fuller than full-time job. I left New England in the Fall of ‘79, and stayed with my family in Orange, NJ, just outside of NYC, and started making inroads, checking out what was happening where, musically and socially in Manhattan and talking with Steve more frequently, who was really a mentor.

What I learned as I connected with the musicians I admired and saw not only, how they were navigating the NYC scene but the international scene, without which most of them would not have had the careers or elevation they achieved. Much of that is due to an historical pattern of animosity and under-valuation of Black Art and Black artists by America.

To the innocents (and I was among them back then) if you are looking at LP covers and listening to the music, and reading the magazines and responding to the promoted narratives, and without a true immersion in the LIFE, it seems that it’s a beautiful meritocracy, and the best stuff (obviously) is what you’ve got in your hands and on your turntable and on your TV, and in the news… Well, it can take a minute to realize that it’s not necessarily that way, and that there are all kinds of forces in place that discriminate on the basis of what you are, or appear to be…

We seem to be in a moment of a revisioning of our societies right now, and I can see what would and in many ways does qualify as better conditions, opportunities for Black Art music and musicians, that have expanded since the 70’s, but there is still much more to be accomplished.

Were there other recordings made of you playing with Steve & David?

@brandonrossnyc: No there were not.

The title of the album suggests something spiritual in nature, is this something that is and was important to you as an artist?

As a fan of this album myself, I feel it has D.I.Y. qualities and almost punk attitudes to jazz (or at the very least towards the music business) insofar as it is highly improvised and free spirited yet still grounded in groove and the blues. Head in the clouds, feet firmly rooted on the earth. Does anything of my subjective interpretation resonate with you and your intentions in the creation of this music, or am I talking nonsense? (ha!)

The perspectives of listeners and observers are always speculative and self-reflective. There’s no way around that, unless one is a master of Zen. I am of the thought that anything created truly from the inside out functions as a relatively ‘perfect’ mirror of consciousness of the observer, and the creator. If a creation of art manages to occupy a ‘timeless’ state at its core, the artifacts that convey its essence – the media/medium – tend not to obscure its communication. Nostalgia, trend, style, while evident in various degrees will not overwhelm the opportunities of the present moment of experience.

Whatever we call something, starts to obscure our vision of the thing we are being with.

I have found that having a ‘manifesto’ of intention for something like art, is like buying one’s newborn a burial plot the day of their birth… and all the rest of the details. We can look at the music and say it has these elements in it, and that attitude about it, and yet still does this and that… And someone who dislikes the music might attribute the reasoning to all the very same attributes under consideration. Insanely, ridiculously, beautiful, no?

Respectfully, I consider VOTTE to be a document of a real, honest, adventurous musical imperative, fueled by desire, determination, and dreams of what could be.

We might call that ‘Jazz’ or ‘Creative Music’ or maybe it’s simply the “it, of itself”, in one of many costumes, illuminating some aspect of itself, in service to Life?

My best to you Nick!

Thanks for the questions and the support.

Thank you for your time, insight and for the music.

I had to follow up with Early Future’s Alex Arnold to hear his side of the story about this amazing reissue.

Alex @earlyfuturerecords: It took about 3 years to get to this point! Lots of stops and starts and hurdles, but thanks to Brandon and Lynne, we’re finally here! It was a record I’d aimed to reissue a while back, as a single project, but it turned into the 3rd record I’ve put out.

People don’t always realise the amount of effort and love it takes to bring a project like this to fruition, you must love the record! Would you like to tell us a bit about your story of making this release happen?

Alex @earlyfuturerecords: I was just obsessed with this album for a long time, knew other people loved it too, and thought it would be a good thing to make it available again. It’s so unique, even for a Steve Reid record, and accidentally seminal, in that I like to imagine lots of tiny bands in the 90s being influenced by it….except they weren’t!

It allowed me to dig into Brandon’s career too, starting here and then finding out about Harriet Tubman (1998!), his work with Kip Hanrahan, and his two amazing solo albums from ‘04 and ‘06 (amongst many other projects) – So the seeds of this record have continued to flower for over 40 years!

The story of getting this record out involved bugging a lot of people and knocking over a lot of stones (but leaving some unturned) to eventually pull together these sounds, words, and Visions….

Well thank you for all your hard work on bringing this whole thing together.

‘Visions Of The Third Eye by the New Life Trio, is available on Early Future Records via Bandcamp, on the link below, and select stores.

Exclusive Premiere: Shamis & Rebiere "Rock It For Ya"

Emanative has created a cosmic strand of multi-cultural UK jazz with African, Indian and Middle Eastern influences unlike any other act on the UK scene.