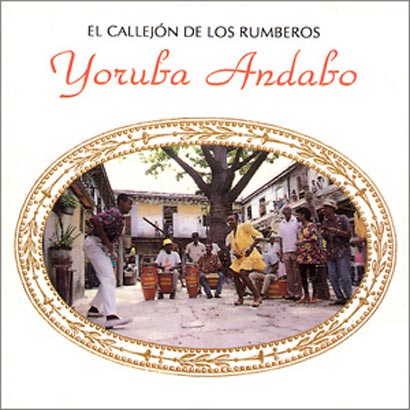 Happy New Year!!! I know I’m crazy late on the best wishes but I was out of town for a while. It had been too long since I had reconnected with my roots so I went back home to Cuba for an extended vacation. If you’ve ever wondered where my love of music comes from it’s definitely my Haitian and Cuban blood. While I was back home my brother and his friends set me up with an awesome new archive of music and exposed me to a bunch of new artists I was missing out on. I’ll definitely be sharing those discoveries with you all in the next few weeks.

The first gem of this series is a group called Yoruba Andabo (Rough translation: Followers of the Yoruba Culture) who have been on the Cuban Music Scene for a while now and are important pioneers in popularizing Rumba rhythms. Rumba is an Afro-Cuban rhythm that’s been around for generations now was often considered a more traditional sound that the youth didn’t really interact with as much. Yoruba Andabo has changed that in Cuba, these days you can ask any 17 year-old if they have Yoruba Andabo on their mp3 and they’ll probably reply that they have every album. Don’t get me wrong they in no way altered the original rhythms to satisfy the younger crowds if anything I think it’s just the thriving energy and relevant lyrics that brought people of all ages to feel connected with their sound.

My favorite track right now is La Gozadera, which was the first piece my brother introduced me to. It honestly doesn’t matter where I am, what I’m doing or who I’m with, if you put on that track my heart automatically starts to follow the beating of the drums, the voices grip my guts, my hips are swaying and my body is taking shapes I never knew existed. You know how they say that real happiness comes after hard times, that’s exactly what this track feels like to me; the blazing sun after the storm. If you struggled in your life you’ll know exactly what I mean.

Be sure to search for more of their stuff online, it’s a little harder to encounter than most but well worth the effort.

In Conversation With: NICKY BLACKMARKET by LAW Magazine