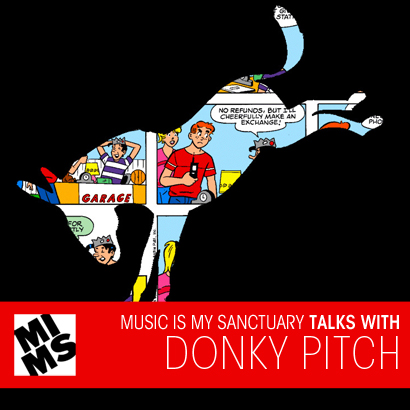 Donky Pitch is a UK-based label and club night set up by Pete Taylor and Dave Grinell, a couple of beardy chaps from Brighton on the South Coast. While they might have started out closer to Low End Theory and the beat scene, the Donky Pitch boys have come across their own sound. Rooted in synths and bass-heavy club music, the label plays host to long-time collaborator Slugabed, based captain Keyboard Kid 206 and Lockah to name three.

Last month, Donky Pitch celebrated hitting 10 releases with a free 18 track sampler featuring music from their international stable of artists. As a small independent who have managed to stay afloat for a good few years, I cornered them to chat about what it’s like running a label now and what the future holds.

Cal (MIMS) : Donky Pitch started as a club night in 2009, were you thinking of eventually becoming label back then?

Pete (Nameless Pete) – Not in the slightest.

Dave (Grinel) – I wanted to run a club night, I tracked Pete down and we ran our first party. There were no plans for a label at all.

And setting up a label is a huge challenge, particularly at the moment.

D – If you’re talking about non-physical releases then I think it’s achievable, but if you want to release vinyl…

P – You see a lot of people start up a label, maybe press one record then you don’t hear about them for 9 months because they realise that nobody really buys enough vinyl to make the effort worthwhile. Releasing any form of physical product isn’t easy.

With vinyl in particular, you’ve got an outlay from the beginning.

D – True, but we’re certainly not in a no vinyl situation.

P – You know Beat Delete? They contacted us recently because people have been requesting vinyl versions of the Lockah or The Range EPs we didn’t get pressed. Apparently they’re trying to move towards a model that isn’t just represses of old stuff, but more crowd funded releases of special projects that haven’t previously been released on vinyl.

It’s a cool idea, do you think it could work for you in the long run?

P – We realised we’d have to adapt to keep doing what we do. People sometimes see not releasing on vinyl as kind of a negative thing. The vast majority of our audience are a digital, but it’s almost like if you don’t sell 200 vinyl worldwide, you’re not really considered as real record label by some.

D – I think the idea you have to release vinyl is slowly, and sadly, disappearing for a lot of people because it’s just not doable, particularly for the style of music we put out.

But what about the news that vinyl is selling more now than did back in the early 90s?

P – Have you seen what’s selling? I think the number one selling vinyl for independents was a David Bowie record. Major labels are re-releasing Flaming Lips records and it’s making people think there are loads of people buying vinyl again. I just don’t think that necessarily reflects reality for most labels. From our point of view, the most important thing is to get as many people as possible to enjoy or understand the music that we’re presenting, regardless of format.

D – Yeah, there was a time where we were discussing whether we’d continue to put things out on vinyl. We were constraining ourselves because we thought if we couldn’t sell 200-300 copies of a record then we couldn’t release it. That felt really limiting, there wasn’t really much scope.

I guess it limits your ability to explore new music and breaking artists. 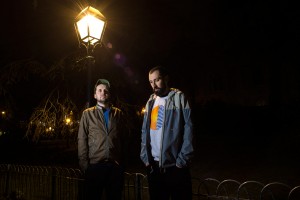 P – Exactly. Our whole approach with the club nights and the label is to push artists that haven’t really got exposure anywhere else. Digital has enabled us. Our focus is on getting new artists out there and getting new releases out quickly; instead of doing 3-4 releases a year, we’re trying to do 5-6.

D – I’d rather find someone new, maybe do a few releases and build them up, and then maybe we build them an audience and build ourselves an audience. There’s a lot more satisfaction in that.

P – The music we push is a very international sound, maybe more leaning towards what’s coming out of the US at the moment but also Europe. There have never really been 4 or 5 core artists to work with that way; we’re trying to expose different fringes of a certain sound.

I remember the flyers you started out with; “Crunk, laser bass, wonky – whatever you call it, it’s got us by the balls and we like it”.

P – That was Dave’s idea

D – I just wanted something fun and novelty, that’s how I saw it at the time.

P – It was part of the whole concept we were trying to present at the time: a fun alternative to the club standard dubstep. The music would be full of funk and colour but still be club centric. We didn’t take it too seriously.

D – Hence the compilation name too; We Didn’t Think We’d Make It This Far. I’m not sure I considered how far we’d make it when we started.

P – We certainly understand the business side of things a bit more now, but I put a lot more value on people paying through Bandcamp when they don’t have to, or giving likes on Facebook, writing us emails or writing small blog posts where it’s obviously come from the heart and there’s no press or commercial motivation.

On the subject of Bandcamp and digital releases; what do you think is the next step for labels like yours?

P – We do alright out of Spotify, it’s worth pointing that out. We’re making a fairly significant sum of money per year from streaming services.

D – I don’t think Spotify is a bad model, I really don’t.

P – While we understand the nostalgia value for certain formats, we understand that to progress you need to embrace new ways of doing things. There’s a Red Bull Music Academy lecture with Steve Beckett, MD at Warp. This is a guy who understands where the music scene in the UK has come from; from the early 90s when they were selling thousands of LFO 12”s, to how they’ve gone through the process with Bleep of becoming one of the first stores to release digitally. I think you need to work out how you can use innovations to you and your artists’ advantage.

D – I think there’s an argument in that, if the music industry had embraced Napster in its infancy and not tried to shut it down, there wouldn’t be so much piracy now. We’re seeing digital record sales increase slowly but surely with our profile. It’s another stream of income, another way of keeping everything afloat – all of these things need to be embraced.

It feels like the only thing that will guarantee the success of the music industry at large is embracing new technologies, you can’t just be about conventional sales.

D – You have no choice because people will do what they want, they’ll download your music illegally and you can’t stop them. You have to find another way, another income and way to do what we want to do, and to make it all sustainable.

P – When it comes down to it, we’re putting out more music than we used to by the people we love, we’re putting on shows with acts that we love and we’re playing music to a crew of people on our radio show. We’re at the best point we’ve ever been in terms of our ability to do what we want and it be maintainable as a business.

If you are channel for new music and all it’s costing you is effort, you’re in a pretty good place.

P – If it wasn’t for Donky Pitch then I’d be spending the time trying to find new artists and inviting four or five people I could find into my room to listen to it. All it is an extension of that. Now, I can find these guys and 1000 people might listen, and that’s incredibly worthwhile.

D – I hope we keep doing what we’re doing. I believe in the label and think it will work. It’s upwards from here.

Donky Pitch has a new EP by Tokyo Hands out in September and their first full-length album from The Range in October. Catch up with the Donky Pitch team on Twitter.