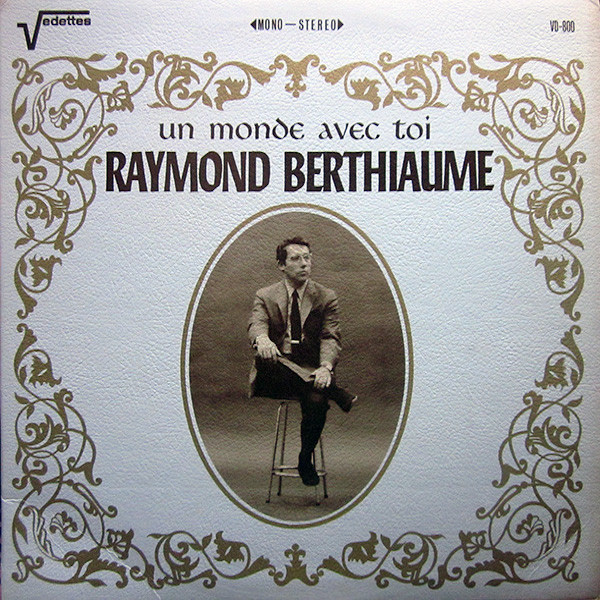 Very often the most overlooked section of a record store is the Easy-Listening, Crooner, Vocal Pop bin. It’s easy to forget that buried in those kitschy album covers, muzak versions and velvet matching jumpsuits sometimes hide incredible nuggets. This is one of those 1$ treasures.

“Un Monde Avec Toi” is a stone cold melancholic love, power ballad classic that is equal parts Burt Bacharach, Mel Tormé and Stax Records influences. And on top of all that, it’s a record from my hometown which I had myself overlooked until my friend Phil Sparkz told me about it.

A little bit on the interesting back-story: its origin jumps back and forth across the ocean twice resulting in four versions in just one calendar year. “The World We Knew” was written and released by German orchestral pop composer of the 50-60’s Bert Kaempfert in Hamburg as an instrumental with backing vocals, then very soon after Frank Sinatra released his full vocal version with a slight rock touch and a great bass guitar intro (an addition which Berthiaume’s version takes even further).

Then, still in 1967: Charles Aznavour, the legend of French Chanson, wrote lyrics inspired by the Sinatra version which is recorded and released by singer Mireille Mathieu. And finally back to Montreal we arrive at the version of interest here: Raymond Berthiaume releases his version of “Un Monde Avec Toi” with Aznavour’s lyrics. All of which still in 1967. I am dumbfounded as to how four different records could be heard-recorded-produced-distributed within 12 months, spanning four countries, this a few years before the internet.

Even if Berthiaume’s version is the absolute belter of the bunch, the progression between the four iterations is quite interesting. It borrows Bert Kaempfert’s beautiful and cinematic orchestration, Sinatra’s bass guitar intro and slight rock ballad feel, Aznavour’s lyrics and smashes them together for a version that is absolutely timeless, yet remains unknown outside of the province of Quebec. Pierre Noles, the arranger – conductor of the piece who actually outclasses the production from the Kaempfert and Sinatra versions deserves a tip of the hat!

Raymond Berthiaume spent his entire working life as a singer, producer and musician. A career spanning five decades in Montreal studios, cabarets and nightclubs, scoring a few hits on the way. A life well-lived if you ask me.

If you’re feeling curious, here are the versions mentioned above.

Bert Kaempfert – The World We Knew

Frank Sinatra – The World We Knew

And how about a nice television appearance version from Raymond. Clearly this is a lipsync version as it is the exact same as the recorded audio but still great to see the man behind the version.