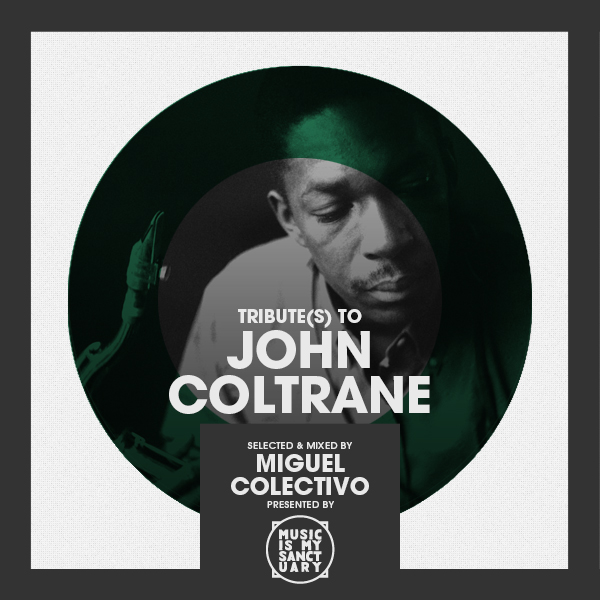 There are no liner notes, essays or books that could ever really put just how vast the influence of John Coltrane is. Maybe a multiple-tome encyclopedia. Maybe.

These liner notes will be no such attempt towards that. However, with this brand new mix conceptualized by Colectivo Futuro’s Miguel Colmenares, maybe we can process a few ideas as to why he has become such an icon for so many all over the globe.

In his essay “The Spiritual Ethos In Black Music and Its Quintessential Exemplar, John Coltrane”, esteemed scholar Emmett Price III establishes that there are three major feats that Coltrane was able to create through his sound:

1. “He used his concept of spirituality to unify social, political, economic, cultural, and religious expression… Coltrane’s study was a pursuit with the aim of understanding the unifying nature of the human experience through spirituality.”
2. “Coltrane used his sound to speak to various constituencies with no discrimination. Through his spirituality, Coltrane was able to reach people of various faiths and beliefs without compromising his mission. Coltrane spoke to the core of humanity; he spoke to the heart of people.”
3. “Coltrane understood that although music was perceived as entertainment, it was more effective as an agent of empowerment. Coltrane used his music as a tool for liberation; not only his liberation, but the liberation of those who heard and received his message.”

For Miguel, this mix really became just the tip of the iceberg. “Initially I wanted to do a wider tribute mix with people who covered Coltrane or even sampled him… but while doing research on that I kept running into original compositions that were done as a tribute to the man himself. These dedications are quite wide in style. There are ballads, spiritual jazz, psychedelic, straight bebop and even broken beat and hip hop dedications. And they were super wide geographically speaking. That’s why this is only Part 1 because I found so many tracks directly dedicated to him that you could do 3 mixes worth of the stuff if you manage to find some of the more elusive and expensive records.”

Only a hand-few of musicians continue to breath so much life into so many people even decades after his death. Price observes that “Coltrane’s explorations were so futuristic that even present-day listeners are perplexed by the raw, honest, and bold nature of his sound, a noncommercial, nonassimilationist, and uncompromising sound. Coltrane’s sound is filled with so much hope that it can empower the serious listener to explore life outside his or her comfort zone. Coltrane challenges the listener to live a life of exploration: living based in the possibilities of equity, justice, unity, peace, and liberation from inner turmoil. Liberation from the inhumane inner-self that is self-indulgent on the ills and evils of society.”

Think and feel the sounds that come through in this mix. Do these compositions not embody the possibilities within us and what’s around us? The sounds within this mix are all about John Coltrane, and to say they’re about John Coltrane is to simultaneously say that these songs are also about transcendence. They’re about harmony of spirit and self, harmony with society, and harmony with the universe. Healing. Realization of your higher self. Ultimately, John Coltrane is synonymous with freedom. The beautiful freedom.