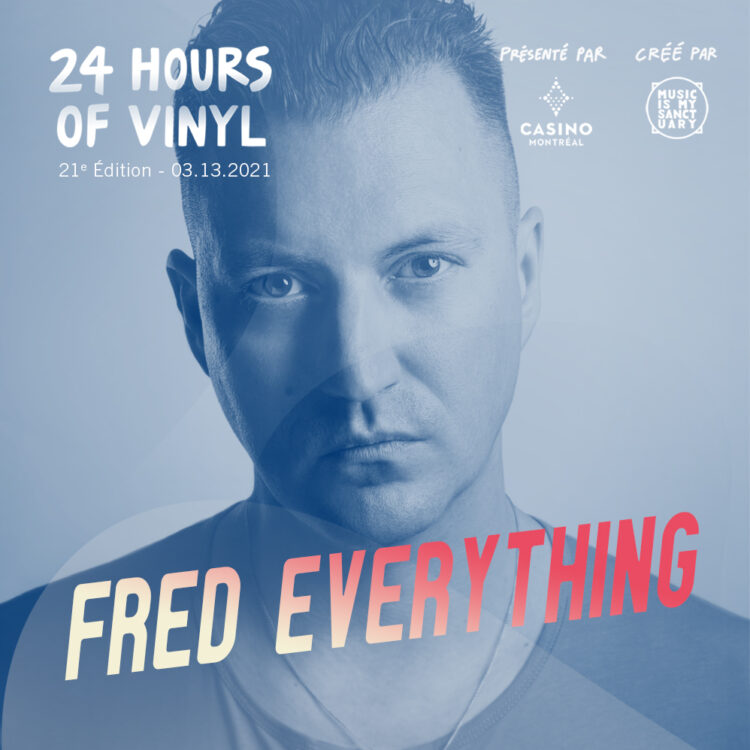 In honour of his upcoming set at our beloved 24 Hours of Vinyl event, we wanted to have a talk with Montreal’s Fred Everything about… records! What else!?

One of the last records I bought is Wendell Harrison – Dreams Of A Love Supreme. I’ve been digging deeper into jazz lately and came across Wendell Harrison. This album would be a bit more jazz funk than some of his previous work.

Wendell Harrison – Where Am I

Pecker & Ryojiro Furusawa – Instant Rasta. I just discovered this a few weeks ago and instantly looked it up. The music is great but it comes with two of the worst qualities : Expensive and rare! I have a friend in Japan keeping an eye for a copy for me.

This is such a hard question. Sundays are pretty much the day to listen to a good record (or 10!). I could’ve filled out that whole q&a with Sunday records. One record I discovered lately is Interlude by Justo Almario. I won’t lie, the sticker “Produced by Roy Ayers” definitely caught my attention. The opening track Interlude is just perfect.

New Order – Perfect Kiss. They shot the video performing the song live in their studio. I was pausing non stop to look at the instruments they were using and the chords they were playing. Shout out to the frog sample out of the EMU-II

Can you play something good? Ahah, we all got that one many times!

I know it’s a bit cliché to put a Gino Soccio record here but I think he was a true visionary. A lot of his music sounds more futuristic than what comes out today. A great pandemic anthem as well!

I don’t believe in guilty pleasure but let’s say a big pop song like Madness “Our House” definitely gets me going.

I never paid a crazy amount of money on a record but I remember paying more than I wanted for Tuff Little Unit – Join The Future on Warp, because I could never find a copy. Warp 1-20 were extremely influential for me.

I used to mop the floor with Pepe Bradock – Deep Burnt before It became a hit. Even after, I still find it’s a hard record to program.

This kind of record that’s easy to find mint in a dollar bin. I buy doubles of records I love to give to friends.

Propaganda – Dream Within a Dream

I actually used to have this record when I was younger but I didn’t quite get it at the time. So I ended up buying it again 5 years ago. All star cast produced with François K to top things off.