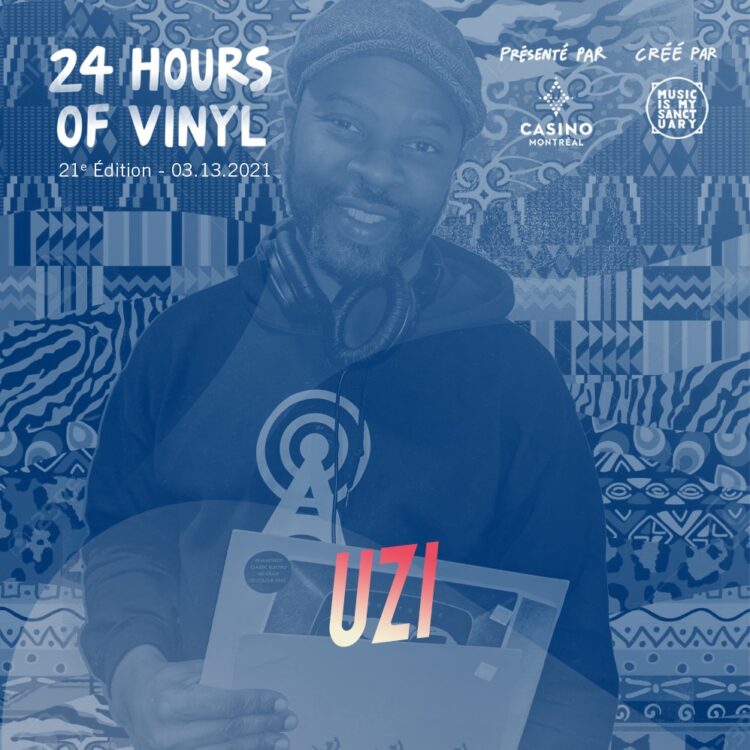 Founded in 2011, the world’s first “around the clock” musical marathon dedicated to vinyl records & DJ culture returns for its unmissable annual edition at the Nuit Blanche in Montréal.

In honour of his upcoming set at our beloved 24 Hours of Vinyl event, we wanted to have a talk with Montreal’s UZI about… records! What else!?

I bought the original mix back in the day on 20:20 Vision recordings. The remixes are very well done.

It never failed me when played at the right moment. It has been in my bag for the past 25 years.

Too many to mention, but I listened to these records this past Sunday:
Robert Glasper – Black Radio Vol 1 and 2
Mahalia – love and compromise
Tribe Called Quest – Midnight Marauders
Stevie Wonder – Songs in the key of life

Bob Marley was a demi god when I grew up in Senegal. Pink Foyd’s “The Wall” and Michael Jackson’s “Off The Wall” were also favorites when I was a teenager.

Don’t ask me why, It is just the first song that came to my mind 🙂

Moodymann – I Can’t Kick This Feeling When It Hits

It is one of the very few commercial hits I have always said yes to.

I’ve been following this kid for awhile now. I absolutely love his stuff.

It has been playing on Christmas day in my household for the past 25 years. Don’t tell anybody though lol

It is a gift I gave to my aunt a few years back. She still has an old Audio Technica Turntable.